Boys can play the fashion game too, and these K-Pop style kings are here to prove it.

When looking for K-pop groups to stan, most people can be extremely nitpicky. Their music has got to resonate with your soul and their vibe has to be something you can easily relate to, right? What else is important? Oh, their aesthetic appeal! Aside from mad talent, they’ve got to dress the part! 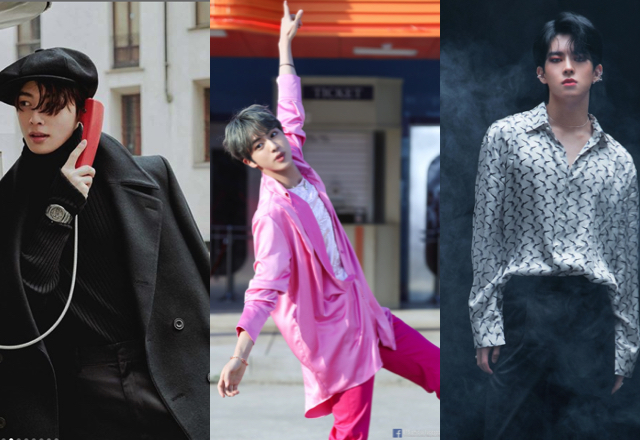 If you think about it, everything in life is a form of art. You don’t have to pick up a paintbrush and canvas to make a masterpiece, because we all live and breathe art either way. The way we think, the way we speak, the way we listen, the way we move, the way we dress; it’s all art.

Proving to be artists of epic style proportions, these K-Pop stars are leaders in the style department. Prepare to be astounded, because we’ve got 10 of the most fashionable men in K-Pop lined up for you!

As a vocalist and visual of BTS, Jin effortlessly radiates that signature Worldwide Handsome charm of his. Without worrying about looking cool, he freely expresses his quirky and friendly personality and spreads good vibes like pixie dust. You’ll frequently see this superstar clad in oversized sweaters or sleek button-down shirts paired with ripped jeans and cute sneakers that effectively make him look like a model off duty.

If there’s one thing we learned from Jin’s style choices, it’s that guys can look pretty in pink too! We are hereby replacing the traditional boyfriend look with the Kim Seok Jin look.

If you want to look Worldwide Handsome too, then you know what to do, boys. Get yourself a pink outfit and strut with confidence. Oh, don’t forget to blow flying kisses while you’re at it!

Of course, this list wouldn’t be complete without the appearance of BTS’ other visual. This elite star has made waves with his ethereal face, and was even hailed as the most handsome man in the world. His beauty gets amplified by tenfold when he injects his exquisite style into the mix. His European-inspired ensembles prove one thing: V is a whimsical Parisian prince and his extensive collection of berets is his crown. V’s powerful sense of fashion definitely deserves an award.

In a recent cover shoot for Vogue Japan, V even gained praise from ARMYs for how amazing he looked in a white monoblock outfit.

If you don’t mind, we’re just going to continue showering you with top tier visuals over here. Astro‘s Cha Eun Woo is a dreamy idol with vocals fit for an enchanting lullaby. Offstage, this style maven knows how to accentuate his stellar beauty with casual hoodies, sleek blazers, and cozy knit sweaters. Occasionally, he even steps out in high fashion mandals. In contrast, when he’s on stage, he takes his aesthetic to new heights with backless blazers and vests. What can we say? He probably wants us to know that he looks good from literally any angle.

Astro’s maknae has crooned and danced his way into people’s hearts with his endearing charm. This disarming vocalist can make you smile with his mere presence alone. Aside from his adorable babyface, Sanha looks amazing thanks to his keen fashion flair. Often seen donning sweaters and loose-fitting shirts, this K-Pop star is a contemporary Romeo. Just look at how he rocks that ivory puff-sleeved shirt like he just time-traveled from the Rennaissance era and straight onto the runway.

Victon’s vocalist, rapper, and maknae is a striking human being with talent to spare.  Rising to fame with hits like “Petal”, Nostalgic Night”, and Victon’s latest hit, “Mayday”, nothing is holding Subin back from hitting the top. When it comes to fashion, this maknae knows how to stand out too. His style ranges from preppy to polished, and he certainly doesn’t shy away from color. Can we just say that his gold blazer looks pristine against his flawless skin?

14 April 2020 marked the remarkable debut of the newest boy group in the K-Pop scene. Although these 9 music makers have only recently been in the public eye, they already have a fast-growing fanbase called Luvity.

While all of the members are equally fashionable, we’ve put the spotlight on their main vocalist for this list. Why? Because we love his asymmetrically cut leather jacket, that’s why. Male fashion fanatics can take a cue from this charismatic singer for some unconventionally cool inspiration.

The Rose is a pop rock band that has added their edgy flair to the world of K-Pop. Their tunes like, “She’s In The Rain”, “My Heart Goes”, “Cry For Love”, and “Wanna Be Bad” are anthems that can make anyone headbang while dancing around the room like no one’s watching. In terms of style, their game is fire as well! Just take a gander at how Woosung gives models a run for their money in that retro Boho shirt. The addition of a cluster of bling and leather pants make us wonder which summer music festival he’s headed to.

We hereby present you with the preppiest and most adorable photo of Hyunjin! There’s no doubt that this singer lives up to his position as the group’s visual. His glowing skin and small face can carry a myriad of looks, just like this polished schoolboy attire. The soft daisy yellow cardigan with a varsity striped sleeve is a closet staple this summer (take note, guys!). Hyunjin kicks it up a notch with a navy blue beret and a matching tie with a gold crest. How cute would it be if all guys dressed like this once in a while?

Say hello to Yuta of NCT 127! This personable dancer and vocalist carries eBoy fashion like an absolute pro. Observe the way he wears this modish plaid puffer jacket like a true king of urban style. His trendy bucket hat is a flattering accessory that easily becomes the focal point of his overall look.

TXT may only have debuted in 2019, but they’re already making a huge impact in the music industry with chart-topping hits, such as “Run Away”, “Magic Island”, “9 and Three Quarters”, and “Eternally”. Their boyish charm, spellbinding music videos, and theatrical montages, make us wonder if they would soon take after their big brothers from BTS.

In terms of style, their game is strong too! We’re totally captivated by Soobin’s endearingly off-beat personality that he matches with awesome fashion picks. Do you want to know the main element that landed him on our style icons list? It’s this signature OOTD pose. We’re not joking, he literally poses this way for all of his OOTDs, and we’re here for it with a capital LOL!

There you have it. The boys of K-Pop practically have fashion running through their veins. Wanna see the girls who reign supreme in the world of fashion too? We’ve got your back with the article below!