The Hallyu wave is an artistic novelty that is steadily breaking its way into the global music scene. With their unique sound, spectacular vocals, and groundbreaking dance moves, it’s no mystery as to why K-Pop stars have broken barriers to instill a cultural reset. But what else is it that has catapulted these talented people to stardom? Oh, it’s their fantastic visuals. 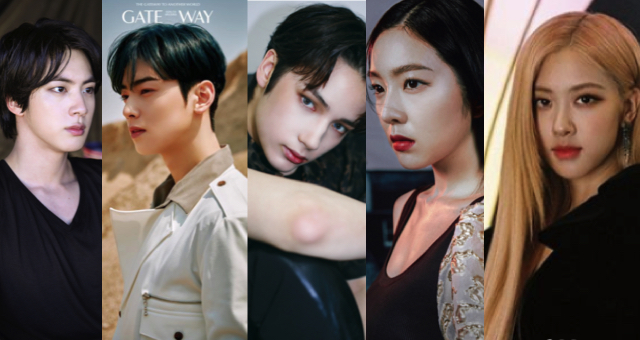 Being talented is a gift. Being beautiful and talented is an even bigger blessing. When you get to use those gifts to live out your dreams as K-Pop idol, you’ve practically made yourself a gift that just keeps producing more gifts.

Since we’re on the topic of God-given gifts, we can ramble on and on about the phenomenal visuals that have risen to fame, so to keep it short and sweet, we have selected 11 of the most dazzling visuals in K-Pop. Let’s get this visual party started!

This charming singer rose to fame as the visual and vocalist of Astro. His gentle persona and dulcet voice reflect gracefully onto his equally beautiful face that could effectively leave onlookers wonderstruck.

Honestly, there are barely any existing words that would do justice to the perfection that his face radiates. Simply put, Cha Eun Woo is a captivating visual that would stand out in a crowd of a million. Is it even legal to look this good?

Meanwhile, the K-Pop star is in talks to showcase his acting chops once again in the K-Drama adaptation of the webtoon, True Beauty. Fitting, don’t you agree?

Breaking international borders with their mind-blowing pop music and collaborating with a slew of Hollywood stars, BLACKPINK has turned the international music scene into their runway. The group’s gorgeous visual, Jisoo, is here to steal the show (and some hearts) with her beguiling beauty too!

Her slender facial features, youthful glow, and wholesomely stunning fashion sense truly light up the world with the power of a thousand suns. A true queen of sophisticated finesse!

Concurrently, the group’s newest single, “How You Like That”, is dominating the charts with over 100 million YouTube views in a mere matter of days. We definitely like that, BLACKPINK!

It’s a bird, it’s a plane; Oh no, it’s Worldwide Handsome Jin! The BTS stunner is the personification of relentlessness, optimism, and just good old fashioned humor. Let’s face it, if dad jokes were a person, it would be Jin. This singer’s sweet demeanor, kind manner, and undeniable talent construct the perfect synergy with his Golden Ratio face.

ARMYs already know that he jokingly uses his “Worldwide Handsome” catchphrase on the regular, but there’s no denying that it’s true. With princely visuals like that wrapped around a beautiful engaging soul, Jin is the total package. He’s the sunshine, the quirkiness, and the knight in shining armor at the same time.

Meanwhile, his latest solo hit, “Moon”, from “Map of the Soul: 7” has spread its wings and flown its way to the number one spot in 48 countries, making it the album’s B-side track with the most number one hits on iTunes. In the song, the crooner gives us yet another listen to his angelic sunset voice. With “Moon” darting to the top of the charts, we suppose fans truly do love Jin to the moon and back!

Bringing us sensational hits, such as “Fancy”, “Breakthrough”, and “Fanfare”, Twice is the most adorable girl group that the K-Pop world has seen, so far. Straight from the group’s beautiful visual line, we’re shining the spotlight on the lovely Tzuyu. Her fair skin, rosy glow, and bright eyes equip her with the power to emanate that endearing girl-next-door-charm.

Moreover her evident beauty, Tzuyu and her group members are a treasure trove of star power too! Their newest record-breaking hit, “More and More” has garnered over 127 million views on YouTube to date. Are you excited to see more and more of these fairy-like singers?

Huening Kai, also known as TXT’s maknae has a mesmerizing face that simply demands attention. The singer debuted in the entertainment industry in 2019, and although it’s only been a year, fans (A.KA. MOA) have already noticed his sparkling glow up from a cute baby-faced crooner into a dapper young man. Just look at those eyes that can pierce straight to the center of the universe.

Meanwhile, TXT is climbing the charts with one hit after the other. Their latest endeavor, “Eternally”, just premiered a few days ago, and is already approaching the 6 million views mark on YouTube. The eternal love from MOA is absolutely tangible.

If you’re looking for the literal definition of ethereal, don’t bother opening the dictionary, because the answer is BTS’ V! His aesthetically pleasing face is the quintessence of an anime character come to life or a fairytale prince. The enchanting beauty that he radiates along with his heart-stirring voice can soothe even the most unruly of souls.

Fans may already have noticed how he burns up the stage with his fierce projection; however, based on their reality shows, his inner child shines through off stage. V is simply spellbinding.

V and the other members of BTS are international trailblazers. With their newest track, “Stay Gold”, gaining over 53 million views on YouTube, there is no denying that the boys live up to the song’s title. BTS stays gold.

As the leader, main rapper, lead vocalist, and visual of Bvndit, Yiyeon wears quite a few hats, all while looking exquisitely beautiful in the process. We just love the ways she glows!

This passionate singer is a fiery presence in the entertainment industry that shines in a quintet of equally talented artists. These wonderful girls just never fail to knock fans off their feet with their brilliant music and stunning visuals. Bvndit knows the name of the game and elevates it to the next level every time!

Recently, Bvndit has released a party anthem-Esque track titled “Jungle”, that is close to raking in 7 million views on YouTube. Play this song while holding a hairbrush as you sing to yourself in the mirror, and let’s rule this jungle of a world.

Starship Entertainment’s newest K-Pop boy group is already stealing hearts with their magnetic music, hypnotic choreography, and brilliant visuals. “Break All the Rules”, “Blackout”, and “Star” are only a few of Cravity’s impressive hits that definitely belong on your playlist.

Since we’re talking about K-Pop’s most dazzling visuals, you’ve got to take a look at Serim! This group leader/main rapper/lead dancer/visual is composed of pure boyish charm and chiseled excellence.

Marking an exceptionally successful debut, Cravity’s hit single, “Break All the Rules” is climbing its way to the 12 million views mark on YouTube. It appears the next generation of K-Pop royalty isn’t just breaking the rules, they’re bound to break records too!

Irene is one-fifth of the mellifluous quintet that hit the entertainment industry with fierce flair and blazing tracks, like “Psycho”, “Power up”, and “Happiness”. This bright and beautiful star is the center, leader, main rapper, lead dancer, sub vocalist, and visual in one!

Her slender oval face, almond eyes, and porcelain skin make her the epitome of Asian beauty. Her dark and deep eyes hooded by long luscious lashes contrasted against her celestial skin are definitely the focal point of her face. Raise your hand if you need to know her skin regimen this instant!

Meanwhile, ReVeluv is sitting on the edge of their seat as the debut of Irene and Seulgi’s subunit collaboration is slated to drop soon. We can already predict that it’s going to be a monster of an energy beat!

The Golden Maknae of BTS has been charming his way into people’s hearts since the group’s astounding debut in 2013. Jungkook’s striking personality and statuesque face coalesced with his legion of talents make us wonder if there is anything this man cannot do. If we’re being frank about it, the superstar possesses the power to make a field of flowers grow with his magically tranquil vocals.

We would ask you to close your eyes when he sings, so you could immerse yourself in the musical journey of his glacier voice, but we wouldn’t want you to miss out on his curious doe eyes and his adorable bunny smile. Jungkook’s near-perfection is along the lines of legendary.

The music magnate’s newest solo single, “Still With You”, was released as part of BTS’ 2020 FESTA. The jazzy track has already raked in over 26 million plays on Soundcloud and counting. Lockdown may have put some distance between BTS and ARMY for now, but through this reminiscent and hopeful song, Jungkook lets everyone know that he’s definitely still with them through it all.

Rose is a rose; there’s just no other way to put it. Hailing from the fierce BLACKPINK quartet, this vocalist is a consistent hitmaker. Her luminescent elegance and talent burn brightly in the sky of brilliant K-Pop stars.

Kicking off BLACKPINK’s 2020 comeback with their savage track, “How you Like That”, we can safely say that we won’t mind if these girls keep coming back over and over again, because we’ll always like that.