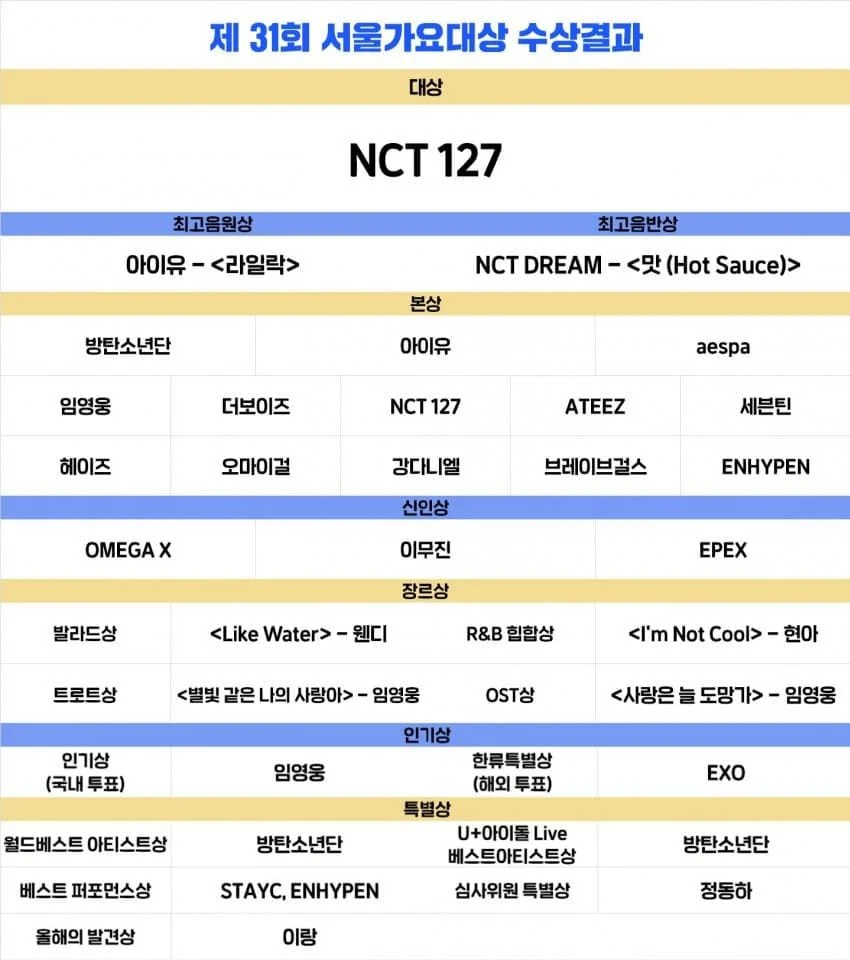 Daesang (Grand Prize): NCT 127
Best Album Award: NCT DREAM
Best Song Award: IU
World Best Artist Award: BTS
Bonsang (Main Award): ENHYPEN, Heize, Brave Girls, Oh My Girl, Kang Daniel, aespa, ATEEZ, NCT 127, THE BOYZ, Lim Young Woong, BTS, SEVENTEEN, IU
Best Performance Award: STAYC, ENHYPEN
OST Award: Lim Young Woong
Trot Award: Lim Young Woong
Ballad Award: Red Velvet’s Wendy
R&B/Hip Hop Award: HyunA
Discovery of the Year: Lang Lee
Popularity Award (Korea): Lim Young Woong
K-Wave Award (outside of Korea): EXO
U+ Idol Live Best Artist Award: BTS
Special Jury Award: Jung Dong Ha
Rookie of the Year: Lee Mujin, OMEGA X, EPEX
CR: Soompi
original post: here
1. I’m a fan of  Dream but I didn’t even want them to win Best Album, f*ck. Give them a Bongsang instead
2. The winners for the Bongsangs are also ridiculous
3. I’ve never listened to Hot Sauce, not even once
4. The Bongsangs are ridiculous ㅋㅋㅋㅋ F*ck, if they’re gonna do it like this, why have paid votes?
5. Just say that you wanted our money if that’s all you wanted…
6. 127 ruined the mood
7. The fact that Dream didn’t make it in the list of Bongsangs is the weirdest thing. Are they gonna tell us how they calculated the results??
8. Shouldn’t they be giving awards to artists with the highest physical and digital sales???
9. ㅋㅋㅋㅋㅋㅋㅋㅋㅋ what is this?
10. The Daesangㅋㅋㅋㅋㅋㅋㅋ
11. SM party!!!!!!!!!!!!! ㅋㅋㅋㅋㅋㅋㅋㅋㅋㅋㅋㅋㅋㅋㅋㅋㅋㅋ
12. Seriously ridiculous. This is something that the whole world will drag them for. An embarrassment for k-pop
13. What’s with the Best Album and Daesang winners..? I’ve never seen IU not receive any Daesang which is f*cking weird. The Best Album is also f*cking hilarious… what were the standards?
14. An illogical award ceremony🤭
15. Wow the Daesang is seriouslyㅋㅋㅋㅋㅋㅋㅋ
16. Did they pick these at random?
17. What about BTS???? A Bongsang??? They are not giving the Best Album to BTS?
18. What’s up with the Rookie and Daesang Awards…
[enter-talk] SEOUL MUSIC AWARD = SM MUSIC AWARD
They also split the Daesang in half some years ago
And now they’re giving it to some SM idols that nobody has ever heard of
I would’ve understood if they decided to give it to Im Youngwoong instead
post response:
[+285][-44]
original post: here
1. [+142, -7]
Actually, this award show is at the level of AAA and The Fact but people weirdly overrate it
2. [+141, -7]
Seoul Music Award needs to stop nowㅎㅎ
3. [+128, -7]
The ultimate groundless award show
4. [+74 ,-9]
10 years ago, they split the award between IU and SNSD, and ever since they started giving it out to SUJU, it looked like they just felt like giving it to an SM idol every time
5. [+65, -10]
Ever since they gave BoA the album award and Taeyeon the digital award, they became famous for it
6. [+58, -4]
I could’ve understood if they only gave it to NCT DREAM, they have potential
7. [+52, -2]
Giving a Daesang to a group that has no songs in the yearly chartㅋㅋㅋㅋㅋㅋ This is peak comedy