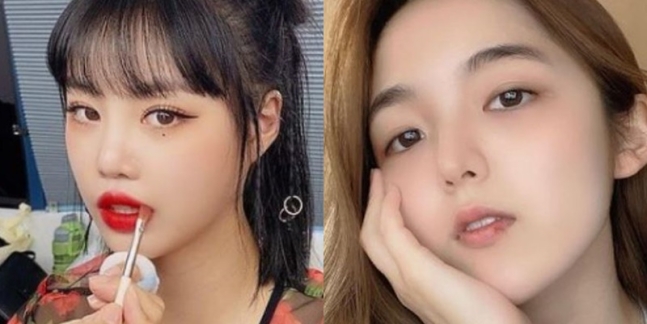 1. [+6,464, -42] Soojin must’ve went pretty hard as a bully… Seo Shin Ae was a celebrity at the time and yet she had the balls to bully her too? She was basically an iljin… must’ve been tough for her to act all nice for the cameras these days.

6. [+593, -5] Cube needs to think this through thoroughly… If they choose to keep Soojin, they’re going to sink the rest of the group. All of their fans are going to leave… Soojin should be on her knees begging for forgiveness and yet they’re still threatening lawsuits instead. Cube deserves to be boycotted.

7. [+525, -6] Seo Shin Ae has nothing to gain by exposing her so imagine how much she was bullied to put her name on the line and expose her like this? Soojin’s a total b*tch.

Article: Soojin, “I admit to smoking but deny the school bullying rumors” and “sorry” to classmate Seo Shin Ae

1. [+530, -7] I’ll never trust anyone who smoked and drank as a minor.. not all kids do that stuff. There are tons of students who stick to their studies.

5. [+37, -0] Smoking as a student? There’s a high possibility that she was also assaulting other students as a bully too. Students use smoking as a way to assert dominance over their other classmates.

6. [+28, -0] So is this the trend lately?? Start by denying the rumors, then threaten lawsuits over the false rumors, then admit to it after a few days, then pretend to meet the victim and apologize~ then write a letter of reflection talking about how you were young and immature.. ㅋㅋㅋㅋㅋ

7. [+22, -1] Why would anyone want to listen to a song sung by this b*tch? There are tons of other idols who are not only better at singing and dancing but better human beings

8. [+18, -0] “I thought we were friends” ㅋㅋㅋㅋㅋ So Soojin was that bully who would do bad things to you and then be all like “what, can’t you let a friend do that?” when you act all offended

2. [+2,206, -9] Soojin writes at the end of her apology “I believe that I would never would’ve done something like that”… she speculates that she wouldn’t, it sounds like she’s not even sure herself. Why are we supposed to believe her apology?

3. [+1,428, -12] For Seo Shin Ae to come forward now, when she’s an actress herself, makes me more inclined to believe the victims… If it’s all true, Soojin needs to go into reflection forever

4. [+1,326, -8] We need to show the teens that they will have no future if they commit school violence. We need more of these school bullying cases to come forward so that bullies no longer have a place in our society.

5. [+471, -26] What’d I tell you guys? They always start by denying it, by threatening lawsuits… then they start saying “I never knew them”.. then the evidence comes out and they start begging for forgiveness.