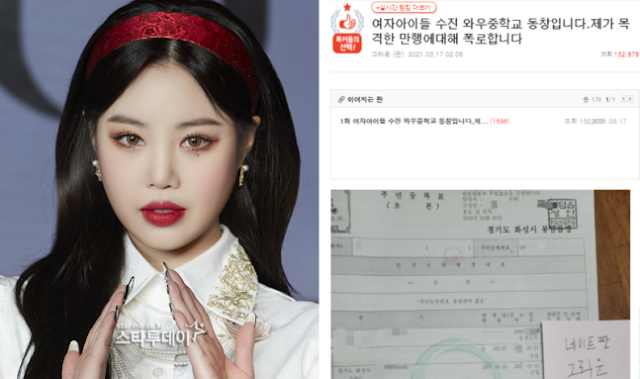 2. [+916, -2] I think people were on the nose with what they were saying. Celebrities who had normal childhoods in schools will always have classmates come to their defense but the ones who bullied others will only be left with their fans or agency trying to shield them.

4. [+251, -4] Even if she doesn’t leave the group, there’s nothing left for her now. The public has already turned against her and she won’t be able to bring in any income for the company. Farewell~

5. [+56, -0] There are so many accounts of her bullying… and instead of meeting with them and apologizing, she’s only doubling down on refusing to apologize because “it happened years ago” and she doesn’t remember any of it. Why did she meet them at all? To find out who wrote the posts and to take revenge on them?

6. [+45, -5] Soojin seems to think she’s still an iljin with nerds barking up her tree but she should accept that it’s over for her now. She should at least begin to beg for forgiveness. Physiognomy truly seems to be a science. Imagine how nasty her temper must’ve been for it to show on her face like this…

10. [+18, -0] She’s so stubborn. Fine, you were young back then, but you’re 24 years old now and know better. How do you still not know how to apologize and reflect? That makes you even worse.