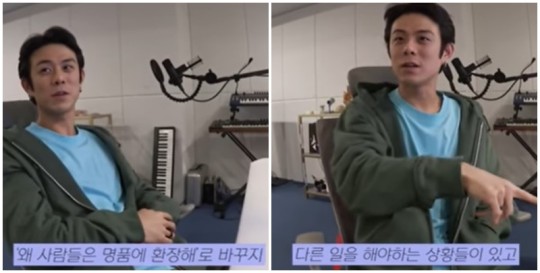 Article: Beenzino reveals what ‘lyrics’ he regrets writing and wants to erase

In ‘Nike Shoes’, “Why do girls go crazy for luxury brands” -> “When I released that song, I was wondering why people were reacting that way when I was just writing about what I had seen, but I realized that thinking like that was wrong. When I started regretting those lyrics, I started changing the lyrics whenever I performed the song to ‘why do people go crazy for luxury brands.'”

2. [+249] Just a few years ago, women were crucified for being gold diggers just for going to Starbucks or liking luxury brands. Men would foam at the mouth to hate on them. But look at the men now? They’re wearing brands like Thom Browne, Bottega, Gucci, Offwhite with luxury wallets, shoes, and clutches? ㅋㅋㅋㅋ Where’re all the men who loved accusing women of being gold diggers now? I’m sure Beenzino wrote his lyrics while swept up in such a society without realizing what made it wrong but at least he has educated himself, unlike some people.

3. [+102] Look at the men going crazy in the comments again. Obviously women like luxury brands because they have the money to afford it.

4. [+50] Women buy luxury brands with their own money, what’s it to anyone else ~.~ are you just making it obvious that you’re jealous because you can’t afford it yourself? ㅋㅋ

5. [+22] Yes, there are people who live outside of their means, but it’s not like their decisions affect you so why not mind your own business? ㅜㅜ Unless someone is making a living out of scamming others, just leave them alone ㅠㅠ

6. [+2] That’s rich coming from someone who buys luxury brands himself ㅋㅋ

7. [+45] Well maybe he knew a lot of girls who were crazy for luxury brands though

8. [+19] Men love ragging on women without thinking of how they live outside their own means by purchasing stocks, bitcoin, and luxury cars outside of their limits ㅋㅋㅋㅋㅋㅋ

10. [+30] Korean women are just mad because they know they like luxury products outside of their means and he’s hitting them with facts ㅋㅋㅋ