Gaon Chart has revealed its chart rankings for the week of July 5 to July 11!

SEVENTEEN’s latest mini album “Heng:garæ” returned to No. 1 on this week’s physical album chart, while Red Velvet – Irene & Seulgi’s first mini album as a subunit, “Monster,” entered the chart at No. 2. SF9’s new mini album “9loryUS” debuted at No. 3 on the chart, followed by WOODZ (Cho Seung Youn)’s “EQUAL,” which held onto its spot at No. 4. Finally, NCT 127’s repackaged album “Neo Zone: The Final Round” shot back up the chart nearly two months after its release to take No. 5 for the week. 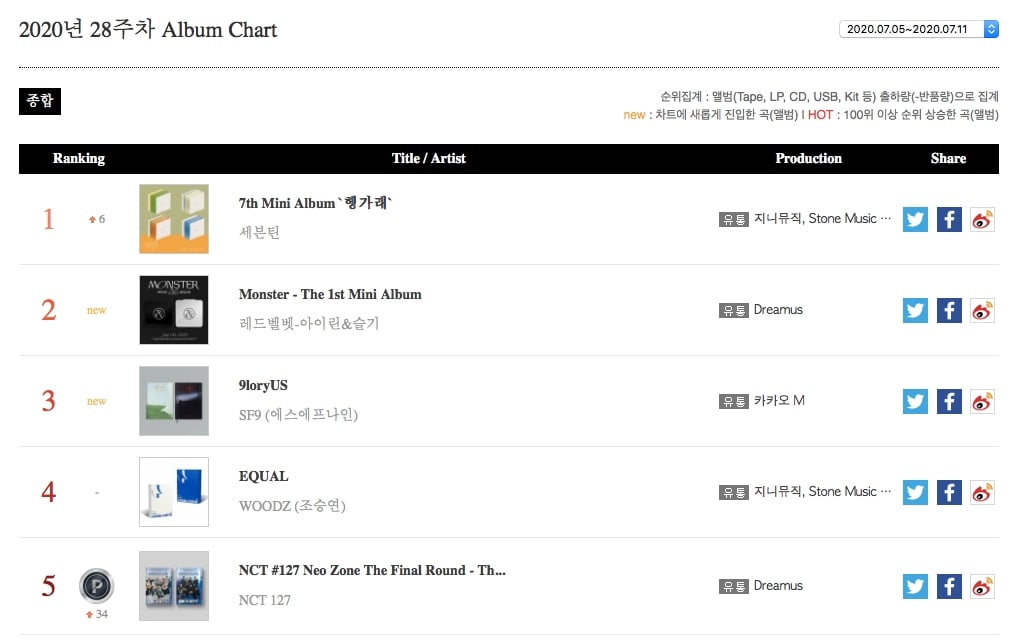 Red Velvet – Irene & Seulgi’s new title track “Monster” debuted at No. 1 on this week’s digital download chart, followed by BLACKPINK’s latest hit “How You Like That” at No. 2 and Chungha’s new pre-release single “PLAY” (featuring Changmo) at No. 3. Block B’s Zico’s “Summer Hate” maintained its position at No. 4 on the chart, with MAMAMOO’s Hwasa‘s “Maria” rounding out the top five for the week. 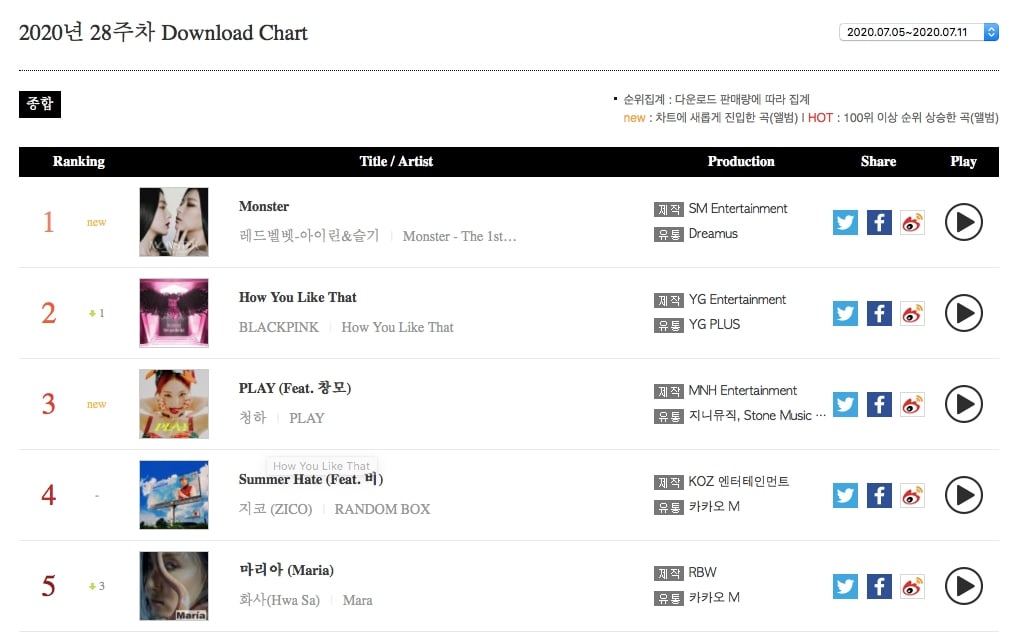 The top five songs on the overall digital chart and the streaming chart were exactly the same this week: BLACKPINK’s “How You Like That” continued its reign over both charts at No. 1, trailed by Zico’s “Summer Hate” at No. 2, BLOO’s “Downtown Baby” at No. 3, Hwasa’s “Maria” at No. 4, and IU’s “eight” (featuring and produced by BTS’ Suga) at No. 5. 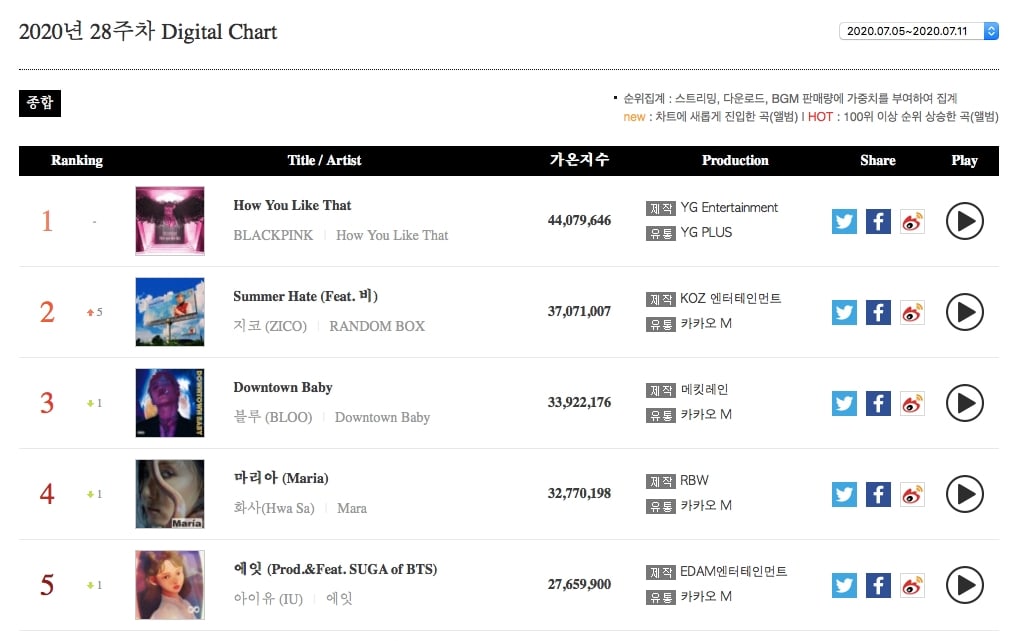 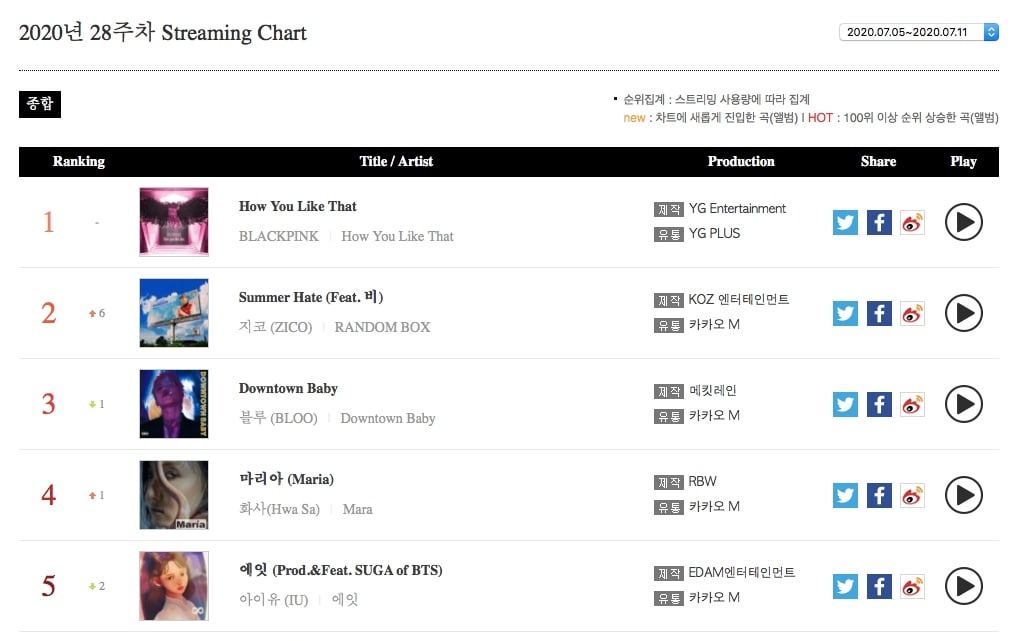 BLACKPINK achieved a triple crown after also topping Gaon’s Social Chart 2.0 for the seventh consecutive week. BTS returned to No. 2, while Red Velvet – Irene & Seulgi made their debut on the chart at No. 3. Yang Joon Il came in at No. 4 for the week, followed by UP10TION’s Lee Jin Hyuk at No. 5. 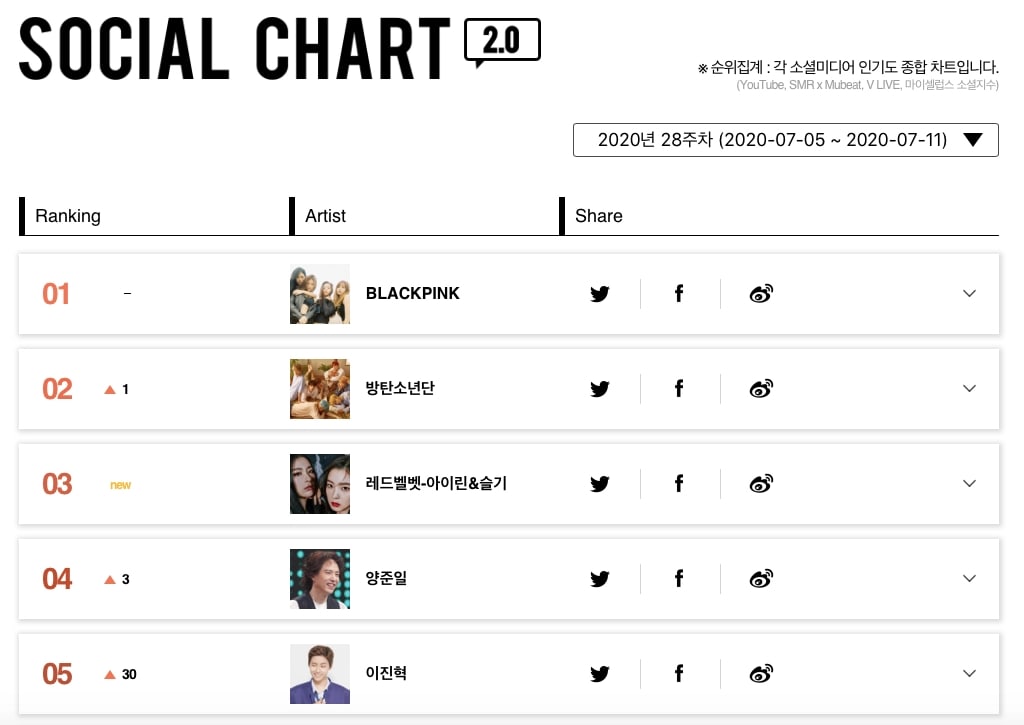