BLACKPINK is really taking over the YouTube platform with their latest music release!

Barely a week after making their highly-awaited return, the femme fatale quartet BLACKPINK continues to pile up achievements for their newest song “How You Like That”. 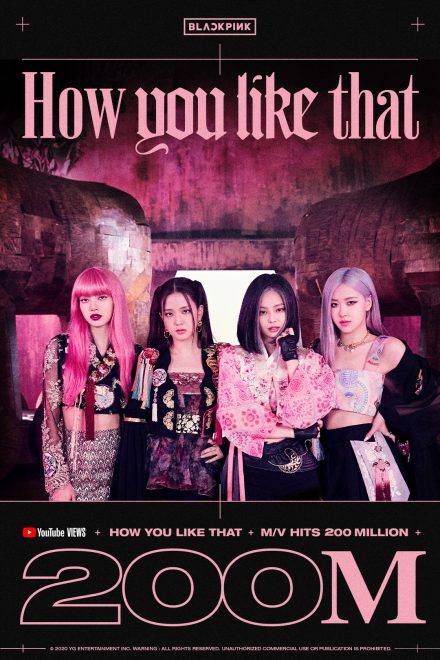 On July 3, the music video of the girls’ latest track has officially joined the 200-million club on YouTube. Remarkably, Jennie, Jisoo, Rosé, Lisa were able to reach the milestone in just seven days and 46 minutes after its successful worldwide release on June 26 at 6 PM KST.

“How You Like That” now holds the record of being the fastest Korean music video to hit the said YouTube milestone. Previously, BLACKPINK’s 2019 hit song “Kill This Love” held the honor, which took around 11 days, 18 hours, and 50 minutes to achieve the feat.

Additionally, the girl group’s newest music video is now the fastest video on YouTube to exceed 200 million views. Taylor Swift previously got the record for her “Look What You Made Me Do” which took 7 days and 14 hours.

Following “BOOMBAYAH,” “As If It’s Your Last,” “Playing with Fire,” “Whistle,” “DDU-DU DDU-DU,” “Kill This Love,” and “STAY,” “How You Like That” becomes BLACKPINK’s eighth music video to smash the impressive massive count on YouTube.