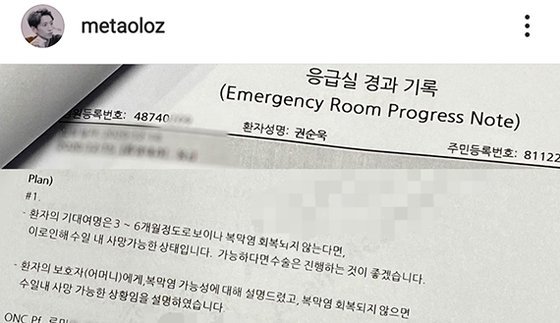 1. [+1,447, -49] It’s hard to expect more from doctors. Even if you’re famous, you’re just another patient to the doctor and they deal with hundreds of patients a day. And if the doctor specializes in cancer, then they’ve probably had to tell so many patients that they’re going to die. Doctors often say that they all start the job trying to inspire hope in their patients and reassure them but after losing their first terminal patient, their emotions for the job dies with the doctor too. More experience just makes doctors colders.. and that can’t be helped.

2. [+1,241, -25] From the perspective of the terminal patient, there’s nothing the doctor can say that won’t make it any less world shattering… which is why they always recommend that you bring someone to be by your side.

3. [+172, -1] I don’t think patients understand that doctors are at risk of being sued if they say something that gives the patient hope and they end up wrong. That’s how lawsuits happen.

4. [+116, -1] What more can a doctor do? They’re people, too. They know the worth of a life but they have to see it as objectively as possible. It’s unfortunate but I think it would also be problematic if doctors started going out of their way to sound more hopeful with their messaging.

5. [+105, -1] What does he want the doctor to do then? Cancer patients go through all sorts of emotions, should the doctor add to it? Even if a terminal diagnosis plunges the patient into depression, they should still be given time to prepare for it. And yes, doctors should be more empathetic, but who is going to consider the emotional toll on the doctors too? Can you imagine if they had to sit and cry with every patient that they saw? They’d barely be able to get through 10 patients a day.

8. [+50, -0] A doctor should be expected to deliver their diagnosis in an objective and realistic manner. What happens when he gives the patient a hopeful message and the patient dies? Sure, saying something in a warmer manner may be easier on the patient, but the message of it ultimately isn’t changing.

10. [+42, -2] Sigh… I understand where his frustrations are coming from but what can you do? This isn’t anything to be taking up with the doctors about. Just gotta hope for better medical advancements.