The #BT21 #StreamingChallenge is a smashing success, hitting 2 million views in only 6 days, resulting in the official release of a Chimmy busking video at the Line Friends New York store!

On May 7th, BT21 announced an exciting event! For the first time, the channel unveiled a video of character CHIMMY cutely busking with his other BT21 friends. The release also proposed a fun challenge for fans. If the video reached two million views in a week, it would play on the digital billboard at the New York location of the LINE FRIENDS’ store.

Fans around the world rallied to show their support for the collaboration between LINE FRIENDS and BTS. Expressing their love for CHIMMY, the success of the streaming challenge proved the ever-growing popularity of the BT21 characters.

Thanks to fans’ enthusiastic response, CHIMMY’s busking video unveiled on the digital signage of the LINE FRIENDS store, right in the heart of Times Square in New York. 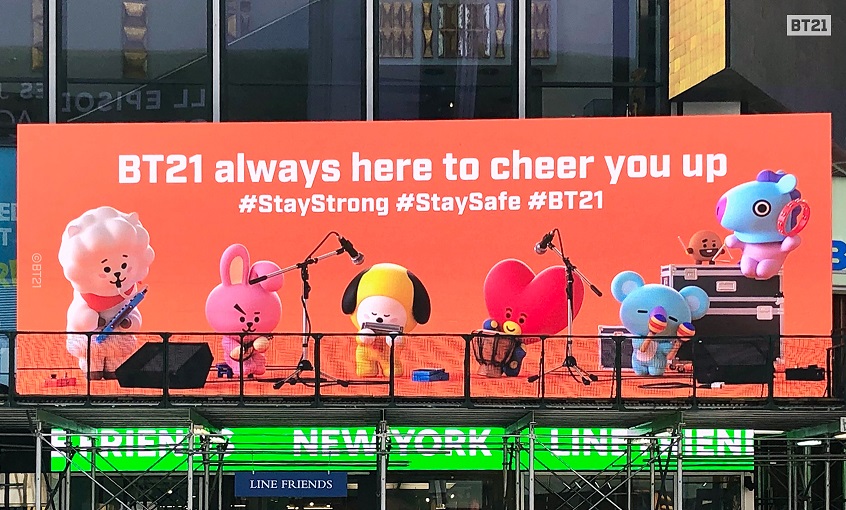 During this stressful and confusing time of the COVID-19 pandemic, BT21’s goal is to provide fans with positive encouragement and hopeful comfort.

The busking video played on the sign shows the BT21 characters in a fancam-styled video. Playing their favorite instruments, the ensemble is led by CHIMMY taking the reigns on the harmonica. With their adorable dancing and the gentle melody of their music, the characters warmed the hearts of their fans.

BT21 consoled their viewers in the cute video. They also promoted safety measures such as social distancing and self-isolation with hashtags #StayStrong and #StaySafe.

Through this streaming challenge, BT21 brought global fans together in a time of separation.