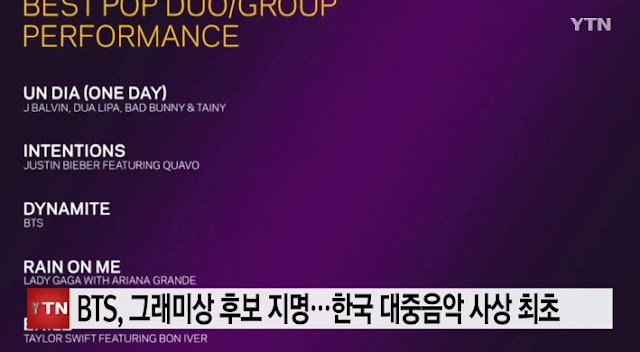 2. [+125, -0] Ah, for real… let’s win it this time, guys. I’m from the generation that grabbed strangers to hug when Korea made it to the semifinals in the World Cup… now I’m thinking I really must be part of a blessed generation ㅜㅜ getting to see the world cup and a Korean group get a Grammys nomination all before I hit my 40s ㅜㅜ

4. [+92, -1] So happy to get to experience such joy by living in the same generation as BTS. Keep going, BTS. You’re all working so hard.

6. [+24, -0] Just getting nominated is already such a big honor for your career. They’ve been breaking barriers one by one since last year and they’ve finally been nominated ㅠㅠㅠ

7. [+22, -0] Realyl daebak… just getting nominated feels like BTS has managed to break down the strong wall that the Grammys put up.. I hope they win..

8. [+21, -0] Asia’s first Grammys nomination, how meaningful ㅠㅠ Just like how the Oscars are a league of their own, the Grammys are quite exclusive as well… I’m so proud that Koreans are breaking down that wall!

9. [+19, -1] This is impossible. The Grammys are such a conservative and exclusive ceremony that getting nominated is difficult enough. This is amazing.

10. [+18, -0] Although we don’t know if they’ll win or not, I hope that people realize that just getting nominated is meaningful enough and that not winning won’t diminish what they’ve accomplished thus far ^^ Three Billboard #1s and a Grammys nomination, I’m so proud of them ㅠㅜ