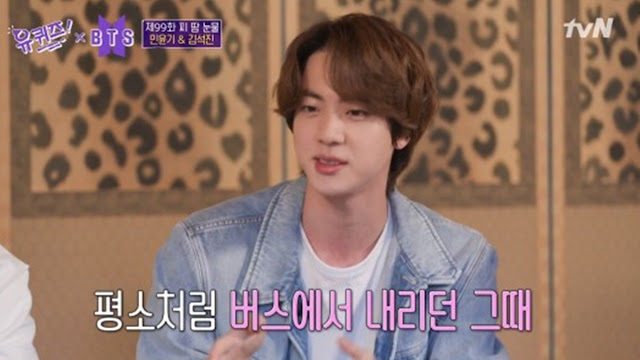 Article: BTS Jin personally clarifies why his whole interview was edited out “It was filled with only depressing talk”

5. [+277] ㅋㅋㅋ This fandom is so wishy washy. They even bought the ad space in the middle of the show and went straight to trolling.

6. [+40] I didn’t know such a controversy existed till today. Everyone seemed satisfied with the interview.

7. [+97] I actually hate how everyone is taking this as an opportunity to put down our fandom and BTS

8. [+30] Please don’t write as if all Armies reacted this way without even researching what the reactions were like after the broadcast..

9. [+12] Jin himself clarified all of this so let’s please just believe him ㅠㅠ but I wonder what he talked about it for it to feel so depressing… that’s what makes me more worried 😢

12. [+8] It will be more difficult for BTS to go on Korean variety shows if the few extreme fans keep reacting this way

14. [+78] But before this clarification was posted, fans couldn’t help but feel mad. From the intro VCR to his entire interview, he only had four minutes of footage. This wasn’t the first time their interviews had been edited like this so of course fans are going to get mad. I don’t like that the fandom is being treated like we’re being disrespectful when people don’t know the context.
– [+9] Every celebrity faces issues with footage length but fans of such celebrities don’t get this mad. The broadcast companies will choose to air what they see fit. If Jin had personally requested his footage to be cut because he only talked about depressing things, is it still the broadcast company’s blame for editing the footage in such a way?
– [+3] You say this happens to any celebrity but this has happened to us multiple times and we held it in each time. This was finally the straw that broke the camel’s back but then Jin said that he personally requested his footage to be edited out so we just let it go… We were promised an honest talk between the seven members and only got a decent interview from six.
– I don’t know the context of all of this but I can see how fans can feel mad if they’ve been waiting for this.