BTS’ Suga proves he’s the king and he’s the boss after his music video for “Daechwita,” hits 100 million views on YouTube!

BTS’ Suga achieves 100 million views for the video for his track, “Daechwita”. The milestone victory comes just a week after his music video “Agust D,” from his first mix-tape accomplished the same.

The music video of the hard-hitting track was lauded for its a majestic setting. The ambiance with the ancient market place and palace was reminiscent of an intense historical drama.

Moreover, the music video was acclaimed for its brilliant conceptualization. Daechwita is a genre of Korean traditional music, specific to military music in the olden days. It was a type of music that was generally a part of a ceremonial walk of the king.

Suga fuses the traditional with the contemporary within the track in the composition. Korean instruments like the Kkwaenggwari (a korean traditional hand gong) and the unmistakable taepyeongso are merged with modern trap beats, heavy bass, snares and percussion to create the dynamism of “Daechwita”. 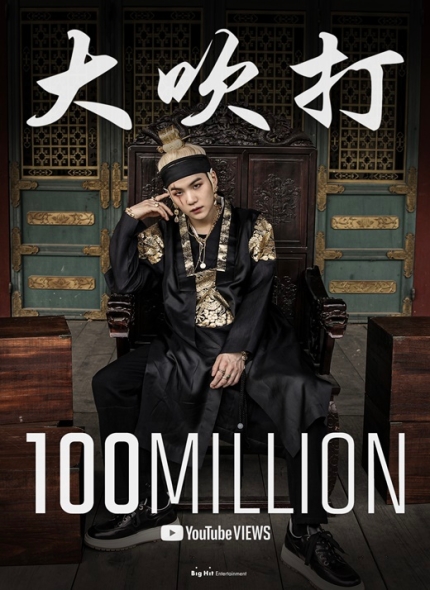 Moreover, Agust D uses the pansori style of storytelling to express his story, of his life as Suga. He raps fierce verses such as, “Born a slave but now a king/Berserk tiger Gwanghae flow/Born in a ditch but rise up a dragon”.

Agust D plays both the king and himself which serves as a striking metaphor for him being his own enemy. And so, in the video, he rebels against himself. The king signifies the star and the perfect idol worshiped by many. Whereas Agust D represents the artist who wants to break free from that label and reveal his own unfeigned self.