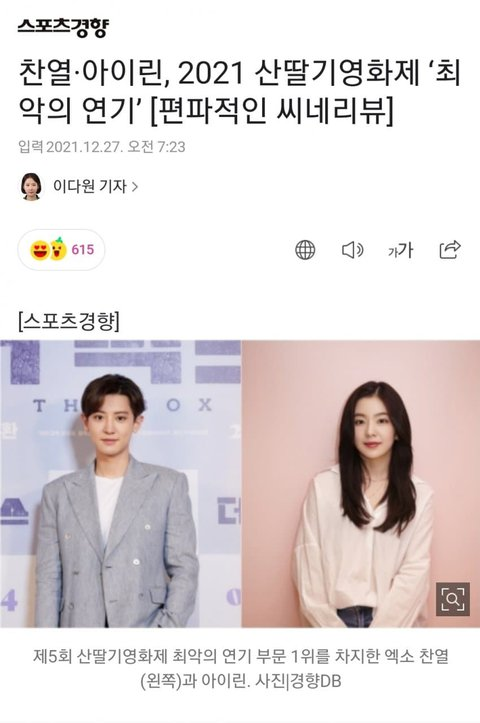 “Chanyeol – Irene, voted as the ‘Worst Actors’ at the 2021 Raspberry Film Festival”

(The Korean Raspberry Film Festival is the equivalent of the Razzies in the U.S.)
Congrats congrats
post response:
[+189][-117]
original post: here
1. [+191, -29]
From a viewer’s perspective, I really hope that EXO, Red Velvet or any other SM idol doesn’t go into acting. Irene can’t act anymore because of her power trip scandal but her intonation was way too weak. Joy who gets pushed into dramas constantly can’t act because of her severe nasal voice and pronunciation. Her work had the lowest viewership and is now joining the 0% viewership club. Yeri who’s the best in acting doesn’t create enough buzz. As for EXO, aside of D.O, the rest is not worth mentioning
2. [+148, -6]
Almost all the time, idols or singers get picked in that category. Even before, the kids they picked were Suzy, Hyeri, Son Naeun, Park Chorong, etc. Back then, even when idols were picked, they were never mentioned on Pann but as expected, Pann-girls only do it because they care too much about Irene. Of course veteran actors and movie actors are better than idols so they have no other choice than to pick idols. Basically, they only pick idols who challenge themselves at acting in movies
3. [+103, -13]
Just like the comment below said, this is exactly like the Korean version of the Razzies in the U.S. so what is there to sue? I’m asking because I’m curious
4. [+68, -7]
So are you guys gonna sue the journalist or the Raspberry Film Festival?
5. [+45, -8]
For what are you guys gonna sue?ㅋㅋㅋㅋ for false fact? This is a fact though. The comments below are f*cking hilarious