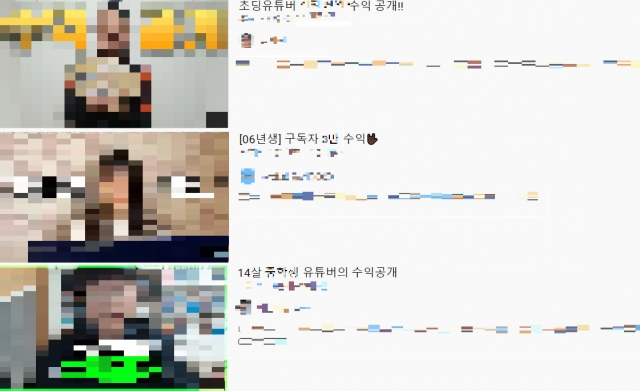 2. [+189, -18] At least they’re better than all these unemployed keyboard warriors ㅋㅋㅋㅋㅋㅋㅋㅋㅋ these chodings are hundred thousand times better than the people who have no intention of ever getting a job and choose to just live off of government assistance

4. [+57, -3] It still takes a lot of effort to film and edit these videos… You’re not going to even make $10 off of a video you lazily shot with your cellphone.

5. [+30, -3] Honestly, not anyone can just open up a YouTube channel and make money off of it. People talk about it like it’s easy but it’s not.

6. [+10, -3] These chodings are still learning and growing and are at an age where they should be working on developing basic culture.. if they fall into the adult world so quickly, they lose the chance to build a foundation and will basically grow up to be YouTube slaves who feel complacent with uploading a few videos to live off of.

7. [+6, -0] They’re using their own talents to make money. If you’re so jealous, go start your own channel. I have no intention of ever starting one so I’m just going to work hard at my company.

8. [+7, -3] I personally do not want my own child hanging out with other children like this…

9. [+4, -0] Everyone has their own skill in life. We don’t need to all learn the same things. Don’t think that just because a child is making a million won a month that you can do it too. There’s a process to everything. Life isn’t so easy.

10. [+3, -0] It’s fine that they’re making money but I wish parents would focus on making sure that they’re still developing character and empathy. Greedy parents will produce greedy children.