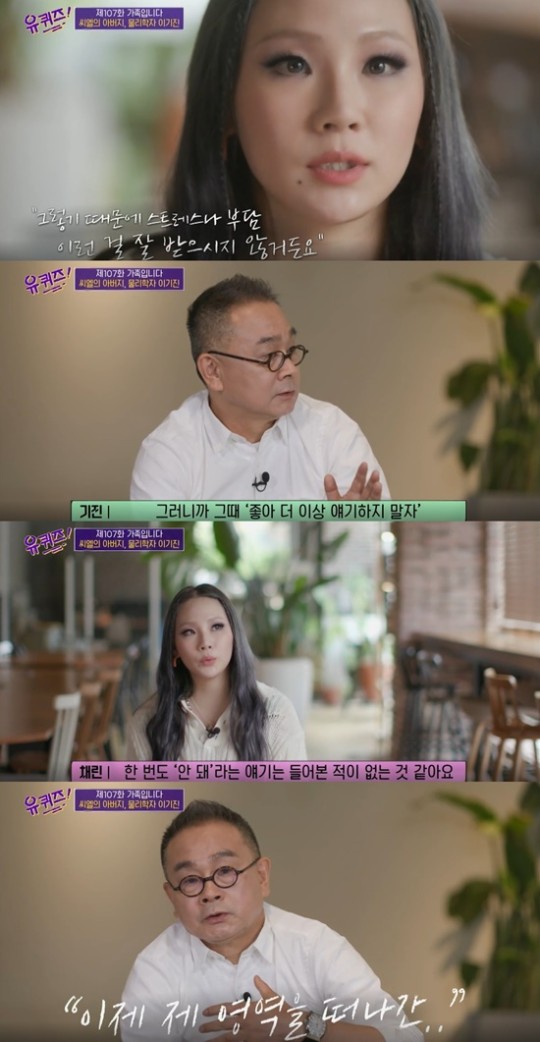 Article: Netizens debate the reasoning behind CL’s father allowing CL to drop out of high school

While telling the story of CL dropping out of high school her sophomore year, her father said, “We were driving down Kangbyeonbuk-ro and she told me, ‘Dad, I want to quit school.’ I felt like I shouldn’t ask her why. I figured she must’ve gone through a lot of dilemma over her decision so I said, ‘Sure, let’s not talk about it any more. Do what you want.'”

When asked why he didn’t ask her why, he replied, “I thought that if I asked her why, we would end up saying things that we didn’t mean. I didn’t think it was a necessary question.”

CL had to add, “I was training while going to school and lived for a year where I was going to bed at 3-4 am. I knew that my dad would never say no so I brought up the idea of dropping out with him. I don’t think I’ve ever heard him tell me no.”

Her father said, “CL has a healthy mentality and we communicate well. She’s a dependable daughter and an amazing friend.” CL also added, “My parents have always been like my friends. My father is more Lee Ki Jin to me than he is my father.”

1. [+1,116] I think this was able to go well because it was a combination of a trustworthy daughter + trusting parents. They had already built up a level of trust to get to this point.

3. [+484] I’d understand being opposed to the decision if your kid was always sitting around at home watching YouTube and barely studying but someone like CL has always been a hard worker with a clear vision for her life. She must’ve been a great daughter for them to just trust and accept her when she wanted to drop out. I think the point of this argument is more about how much the parent knows and trusts their kid. Every family is different, there’s nothing to debate whether it’s right or wrong about it.

4. [+67] Only possible because the daughter is CL. I’m sure the father had a trust in her that she would not make a hasty decision without thinking it through.

5. [+19] So she wanted to drop out while training, not before it. I’m sure her parents knew how much she wanted to be a signer and how hard she was working towards it. Most parents would still say no and tell them to at least graduate first… but CL gave her parents enough trust to accept her decision.

6. [+115] There are some parents who treat their kids like an extension of themselves, but it’s best to just let your kids do what they want. Even if it doesn’t make them a lot of money in the end, there’s a lot of lessons to be learned in the fact that they at least tried to pursue something they wanted for once in their life. I know parents are afraid of their children facing failure but if your idea of failure is a small income, your thinking is wrong.

8. [+5] It’s because her father trusted her and supported her like this that we have the CL we know today