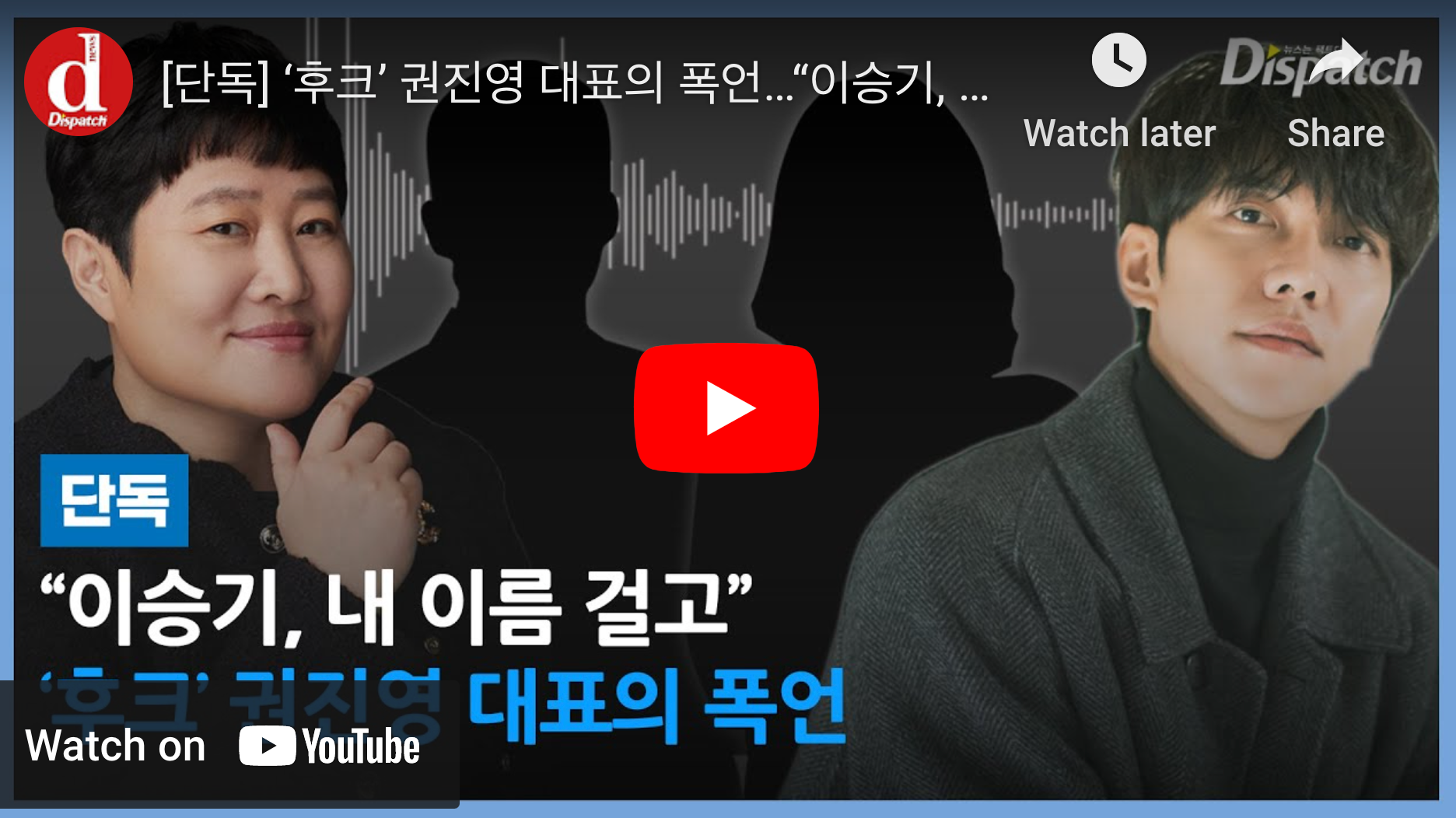 This is the most frequently asked question after our report that Lee Seung-gi was a slave for 18 years.

In fact, Dispatch was in disbelief as well. So we compared all the deposits and withdrawals (overnight) and really, there was zero settlements for his music. It was truly 0 won.

So why the hell did Lee Seung-gi accept it? Bottom line, he was gaslighted. 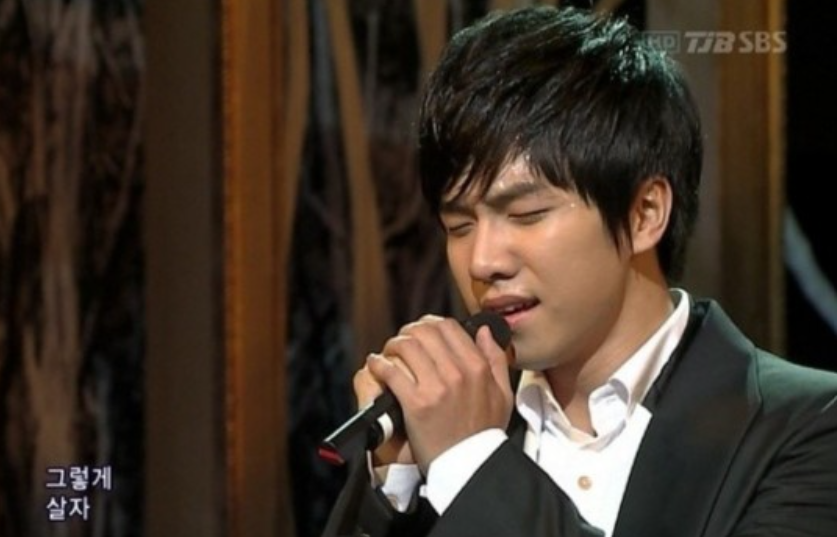 “You’re a minus singer!”

Lee Seung-gi has quite a lot of income from dramas, varieties, and CFs. The fee is also quite high so of course the settlements over this were done correctly. Lee Seung-gi was satisfied with the income he earned so is that why he didn’t challenge her words, “You’re a minus singer??”

Manager: “The CEO always brainwashed him saying he was a “minus” singer. She’d say “your fans spend money but make a lot of demands. You make a lot of money with other things. Think of singers as just fan service.” From Lee Seung-gi’s point of view, he chose not to get criticized than accept payment.” 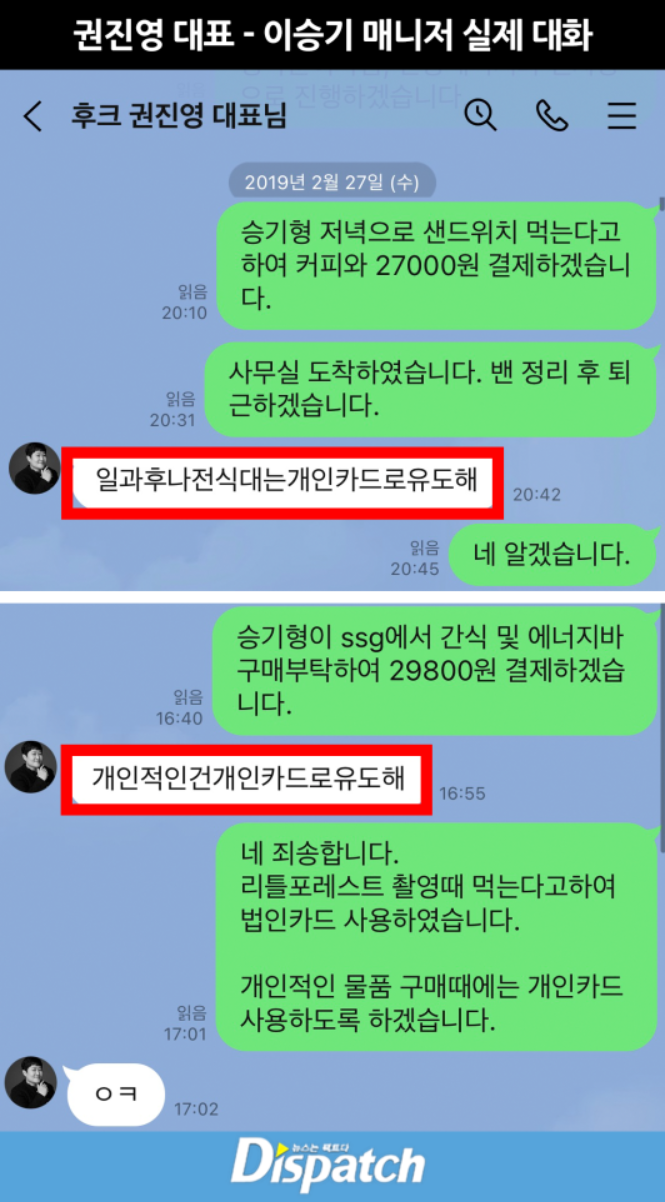 Manager: Seung-gi hyung said he wants to eat a sandwich for dinner so I’ll charge 27,000 won.

Manager: We arrived at the office. I’ll leave work after cleaning the van.

CEO Kwon: Any meals after work or before should be paid with personal card.

Manager: Seung-gi wants me to buy snacks and energy bars from SSG so I’ll charge 29,800 won.

Manager: Yea, sorry I used the corporate card because I was told he needs to eat while filming Little Forest. When purchasing personal items, we will use a personal card. 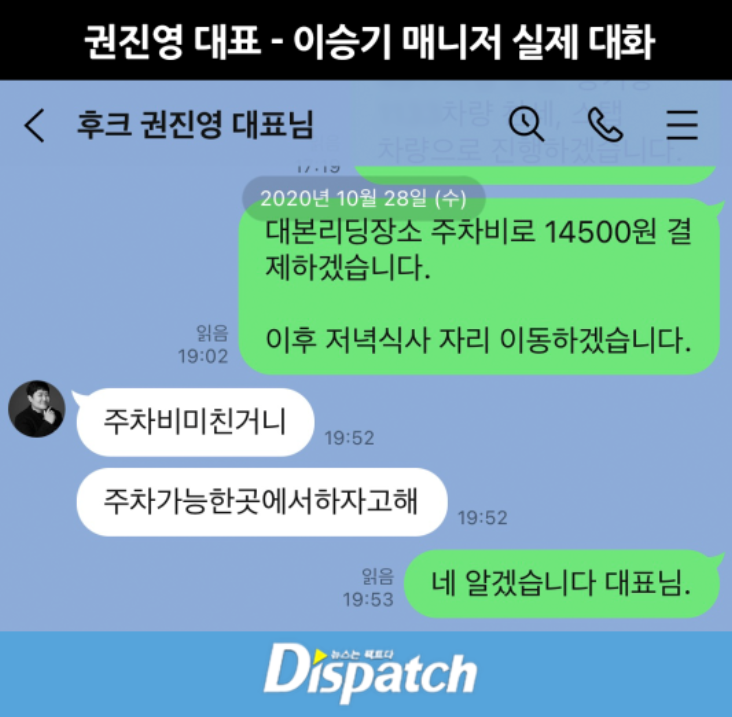 Manager: I’ll charge 14,500 won for parking at the script reading location. After that, we’ll move to the dinner table.

CEO Kwon: Are you crazy with that parking fee? Do it elsewhere without one. 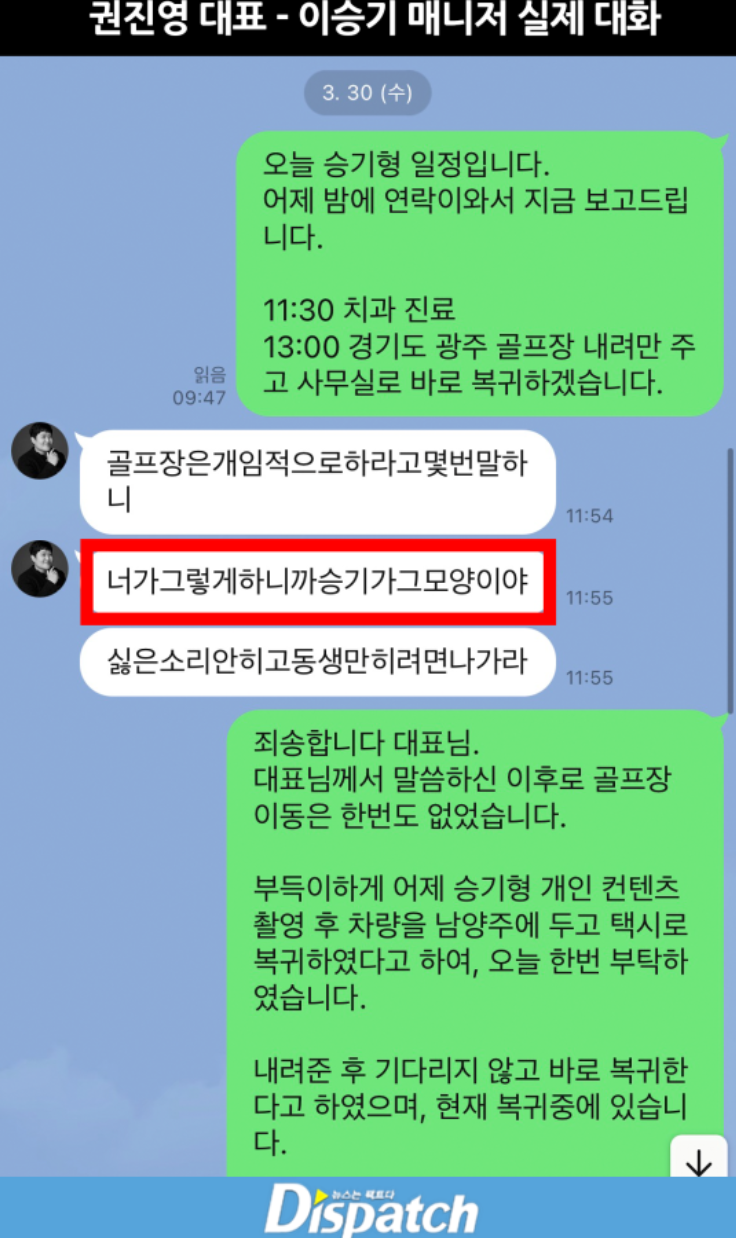 Manager: Seung-gi’s schedule today. I got the call last night so that’s why I’m reporting it now.

13:00 drop him off at the golf course in Gwangju, Gyeonggi-do and return to the office right away.

CEO Kwon: How many times have I told you about random golf course trips? Because you do that, Seung-gi is like that too. If you hate me and only care about your hyung, go out!

Manager: I’m sorry. The rep said we’re moving to the golf course now. Seung-gi hyung said he left his vehicle behind in Namyangju after filming his personal content schedule and returned home by taxi so he asked me this one time. After dropping him off, I told him I’d return to the office immediately. I’m on my way back now.
Of course there were times where CEO Kwon Jin-young was kind. Especially when she called the manager to run her own personal errands, she called him by name. 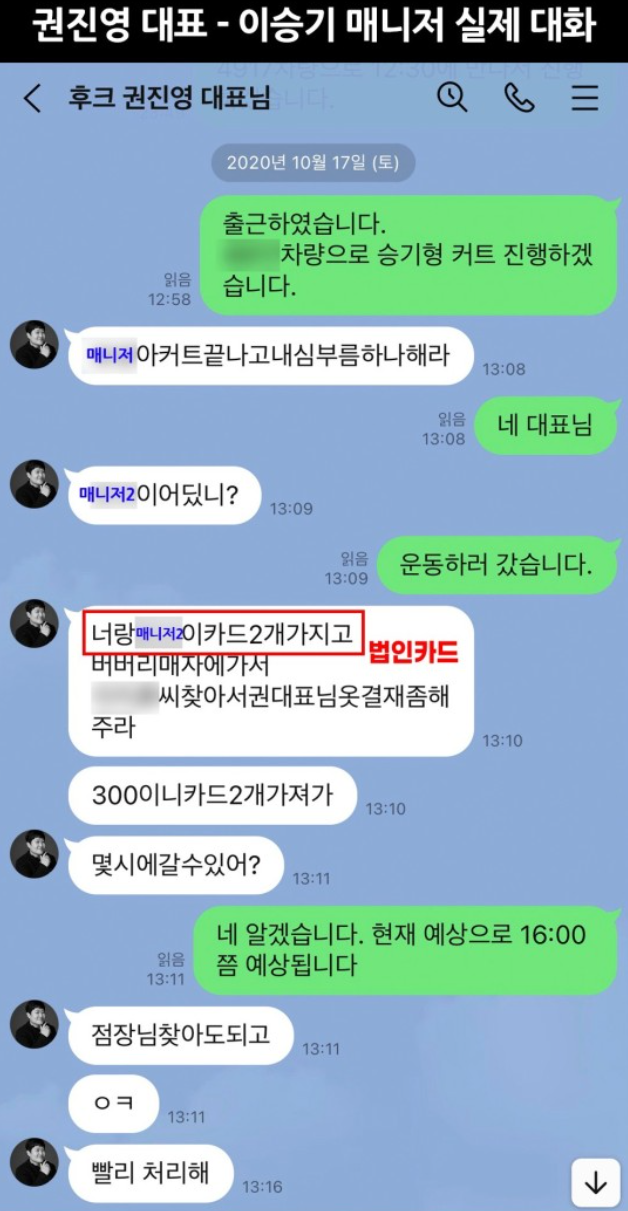 CEO Kwon: Manager XX, after you’re done with that, do my personal errands.

CEO Kwon: Where is the manager?

Manager XX: He went to exercise.

CEO Kwon: XX-ah, run an errand for me. Take manager XX with you and two (corporate) cards and go to the Burberry store and buy some clothes. It’ll be 300 so take two cards. What time can you go?

CEO Kwon: Ok. Find the manager and deal with it quickly.

After the Lee Seung-gi “18 year slave contract” article came out, reports poured in.

Here is a conversation with an informant to give you a glimpse into CEO Kwon Jin-young’s personality. He was an employee at the Lou XX store. 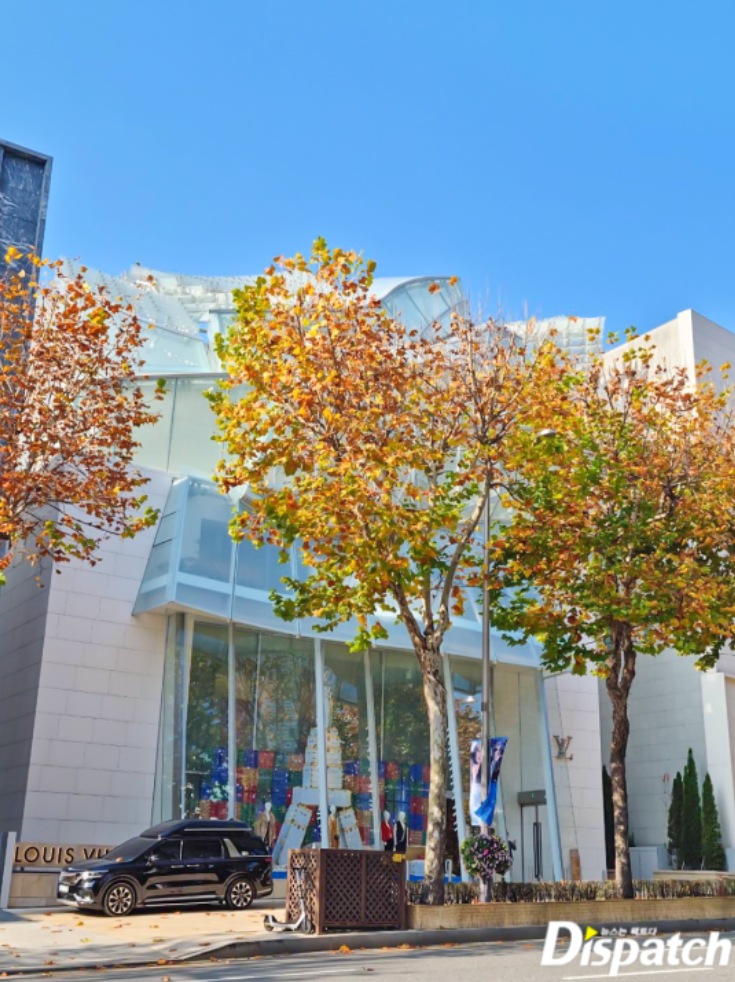 Informant XX: When she came, everyone would say “be careful. Don’t ask questions.” She started complaining after she heard an exhaust sound that came out of her Ferrari.

CEO Kwon: “Hey! You f*cker. Are you looking down on me? This XX, why are you making noises at me? Are you sending me threats?? Tell all the staff here to come out!”

According to the informant, he was shaking to the point he almost fell to his knees. The feeling of contempt coming out her at the time was indescribable.

At the time, Lou XX staff consoled him and explained, “That’s the Hook CEO. She’s like that. No one can say anything because of her great spending power.”

CEO Kwon is known as a donation angel. In fact, that’s how the press release was distributed. The authenticity of this will be discussed in detail in a follow up article.

Finally, let’s go back to November 17th. That’s the day CEO Kwon urgently convened directors and managers. This is because Lee Seung-gi asked for proof of contents.

Lee Seung-gi’s manager thought about how to protect himself because it was obvious of the scolding and threats to come. He entered the meeting and pressed the record button.

Let’s listen to it.

Why the hell was Lee Seung-gi attacked. Her gaslighting was so scary to watch.

The recording starts with CEO Kwon talking about herself stating what’s she’s capable of when she’s angry. A director tries to calm her down and she retorts back and tells her to “shut up!”

CEO Kwon: “I’m someone that when I’m super pissed, I get very calm and rational. I get very sharp. But I have to get mad. If I don’t, I’ll just yell, “Hey! You f*cker” that I even frighten myself. That’s my disease. It’s how I’ve been since I was little. I get scary to the point people say I’m the devil and look like a murderer. That’s how scary I get and I’m getting there now. He [Lee Seung-gi]’s not holding back anymore and asking for accounting records.”

Director XX: No, that isn’t it.

She then goes into another a rant and threatens to kill Lee Seung-gi.

CEO Kwon: [pounds table] Shut up! Just stop it. I’m going to spend the rest of my life trying to kill him.

She then begins yelling at Lee Seung-gi’s manager.

She also places blame on accounting team for the leaked report over Lee Seung-gi’s accounting records.

CEO Kwon: What’s wrong with it (accounting records)? And you, shut up, don’t say one word from here on out.

CEO Kwon: Hey! [towards Lee Seung-gi’s manager], listen to me. Hey! [towards Park XX – accounting staff]. We told him to do it but he didn’t. That crazy ba$tard didn’t want to work. He never gave us the records. I said I’d prove what happened so why are you acting up, you f*cker. Isn’t that the truth?

Lee Seung-gi’s manager then gets up and leaves the room. He’s heard saying he’s quitting and Director XX tries to console him as he breaks down in tears.

Manager: I’m not going to do this. Just stop. I really did my best.

Director XX: I know, I know.

Manager: You don’t know how hard I’ve worked. Didn’t we schedule this meeting to figure this out? What did I do wrong?

Director XX: Nothing, you did nothing wrong. Let’s go.

Manager: [breaks down and starts crying] I really worked hard these past nine years.

Director XX: I know, I know.

Manager: How would you know? She [CEO] always picked on me in front of everyone and would threaten me saying I’m finished. How can I work if she’s asking me to “choose my loyalty wisely.” Do you know how I endured that?

Dispatch has promised a follow-up article exposing CEO Kwon’s “image-making” through the media.