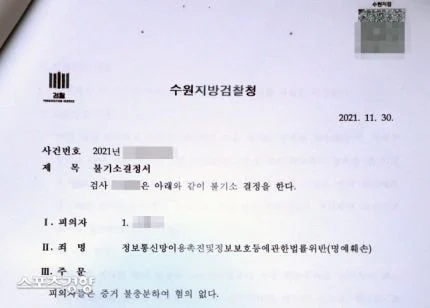 Previously, an accuser ‘K’ raised school bullying allegations against the actor, known for his roles in dramas like ‘SKY Castle’ and ‘Extracurricular’, via various online communities. When the issue began making headlines, Kim Dong Hee’s side denied the allegations and filed a lawsuit against ‘K’ for defamation of character.

Now, according to ‘Sports Kyeonghyang’, the police have concluded that ‘K’ was “not guilty” of defamation of character due to a lack of evidence from the plaintiff’s side.

First, according to the police report file,

“The plaintiff admitted that he bullied defendant ‘K’ during his 5th year in elementary school using verbal attacks; however, the plaintiff denied ‘K’s claims that he threatened ‘K’ with scissors or a box cutter. The plaintiff admitted that he pushed ‘K’ in the chest with his hands, then went on to kick ‘K’ in the chest with his foot, but maintained the position that ‘K’ raised the bullying accusations on online communities with malicious intent by making the incident seem more serious than it was.”

Next, the police file determined,

“Based on the following, it is difficult to conclude that ‘K’s accusations against the plaintiff Kim Dong Hee are false: 1. ‘K’ was able to provide a detailed and descriptive account of the incident; 2. The principle of the school at the time remembered this incident and submitted a voice recording as evidence; 3. Other witnesses also testified in ‘K’s favor.”

According to ‘Sports Kyeonghyang’, evidence presented by ‘K’ during the investigation included a voice recording by the school’s principle at the time, in which the principle testified that they apologized to ‘K’ and ‘K’s family on behalf of the whole school for the bullying incident. Furthermore, ‘K’s mother testified that Kim Dong Hee and Kim Dong Hee’s mother also visited their home to apologize.

Finally, ‘Sports Kyeonghyang’ claimed that the previous media outlet reports published in December of 2021, which stated that “Kim Dong Hee has been found not guilty of his school bullying charges”, were false.

At the time, Kim Dong Hee’s legal representative admitted that accuser ‘K’ was found “not guilty” of defamation of character, but also emphasized, “The fact that the police investigation concluded with charges does not mean that the accusations raised by ‘K’ are entirely true.”

However, various media outlets failed to read the statement thoroughly and published “false” reports regarding the investigation, said ‘Sports Kyeonghyang’.

Finally, accuser ‘K’s family told ‘Sports Kyeonghyang’, “Kim Dong Hee and his agency has yet to apologize for any of the actor’s past actions. We hope that Kim Dong Hee admits to his wrongdoings and sincerely apologizes.”

Cr. Allkpop
source: https://n.news.naver.com/entertain/now/article/144/0000786510
original post: here
1. So he stumped on the student’s chest??? Amazing…
2. They claimed he kicked the student’s chestㅋㅋㅋㅋㅋㅋㅋㅋBut look at him trying to belittle his own actions here wow… Last time, they released a statement as if Kim Donghee was cleared from his charges. This is just the same pattern over and over tsk tsk. The witness don’t remember anything like Kim Donghee’s perspective, but like K’s perspective, you can see it in the post
4. To the point even the principle had to apologize on his behalf. Aigo he’s so shameless
5. F*ck off
6. JYP again
7. School violence = JYP
8. This makes me barf, kick him and Hyunjin out
9. This shows that assailants will forever forget and live on with their lives while only the victims will remember precisely what happened and receive psychological treatment for the rest of their lives
10. So he never reflected on what he did in elementary school and never realized how wrong it was and continued doing the same in middle school