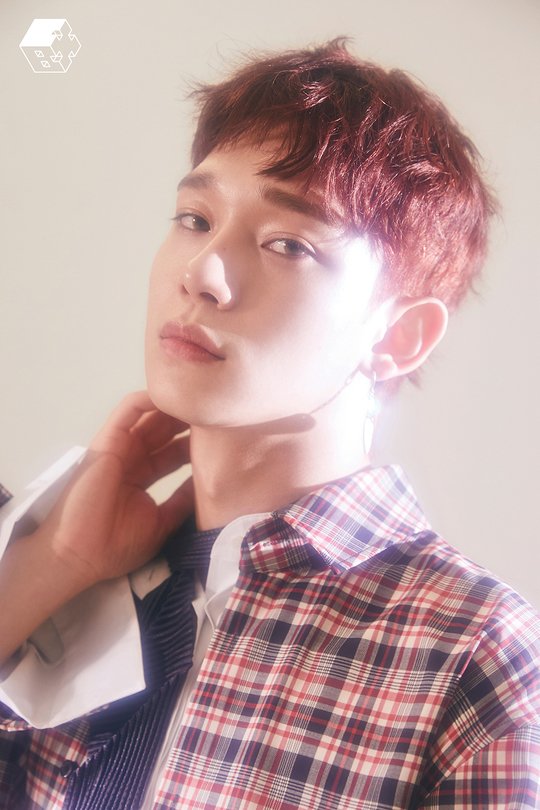 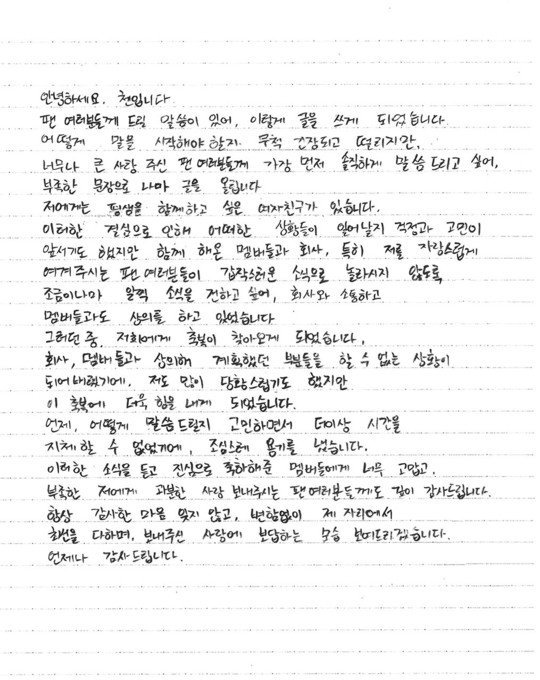 Article: EXO Chen’s official announcement, girlfriend is pregnant “I want to be with her forever”

1. [+5,313, -75] Daebak.. a popular active idol getting someone pregnant before marriage.. his fans must be really surprised right now

4. [+614, -7] He’s trying to act like the baby came along while he was preparing for marriage when it’s basically a shotgun wedding

5. [+535, -27] I’m not an EXO fan or anything, just a woman in her thirties, but my mouth dropped in shock when I read that Chen’s getting married after getting someone pregnant… I can definitely understand EXO fans going nuts if even I’m this shocked…

8. [+410, -94] It’s shocking but I find it amazing that he’s choosing to take responsibility instead of aborting it. He’s going to suffer a huge aftermath for his decision as an EXO member but I bet you that there are a ton of celebrities who have chosen to abort instead.

3. [+678, -36] The sad thing about the timing is that he has to enlist soon so the woman is basically going to have to raise the kid herself for a while

4. [+114, -4] Well it’s a pre-marital pregnancy, what other option does he have but to take responsibility unless he’s going to abort it and throw the woman away? The fact that they didn’t use protection in the first place puts responsibility in a different perspective in this situation.

5. [+66, -0] Changmin at least showed a basic sense of respect for his fans which is why he received the blessings of the public when he came forward with his relationship. Chen’s method is too wrong.

1. [+8,141, -338] Speaking neutrally, he’s 29 years old and at an age where marriage is understandable. He also claims that he was always planning on marrying this woman, so I don’t find it that problematic… Unfortunately, he would’ve received a lot more support if it was just wedding news, but it’s super shocking for his fans to hear the wedding news through a pre-marital pregnancy…

8. [+844, -28] I’m sorry but taking responsibility for a life you created is a definite thing, not something deserving of praise ㅋㅋㅋㅋㅋ if someone failed to do so, they’d deserve hate, but doing what’s expected of you is not deserving of praise

9. [+772, -87] I knew he had a girlfriend and it’s fine that he wants to marry her but as a fan, I don’t understand why you’d commit pre-marital pregnancy. Let me just laugh ㅋㅋㅋㅋㅋㅋㅋㅋㅋㅋㅋㅋ

2. [+7,521, -517] Sure, that’s great and all, but why would you not use protection knowing that you haven’t even served in the army yet? What is this, Jongdae-ya… I’m actually worried for the woman right now. Imagine her situation… she’s pregnant before getting married, her partner’s an idol, he hasn’t served yet, he has a ton of young fans… If he had any respect for his girlfriend at all, he wouldn’t have planned to marry her in this manner. I’m glad he’s taking responsibility but I hope that he’s able to protect her and lead a happy life.

3. [+3,242, -407] In an industry where all the top celebrities are playing dirty, it’s amazing that he’s taking responsibility like this at a young age. It must’ve been a difficult decision but I think he’ll make a fine man of the household. Congratulations to your blessing and your new wife.

4. [+2,982, -153] It’s unfortunate that he has to serve soon. Even if he manages to get into a unit that comes home every night, she’s still going to have to watch over the baby by herself.

5. [+1,922, -141] I support your happiness. Congratulations on your marriage as Kim Jongdae, the person you are before you are an EXO member.

8. [+531, -113] I’ve supported and believed in him for the past 6 years but I cannot congratulate him on a pre-marital pregnancy. He will now be putting his team at risk by choosing to raise a baby and pursue his career at the same time.

10. [+239, -20] In reality, a lot of people get married from pre-marital pregnancies. I guess people are more strict with him because he’s a celebrity… All that matters is that you live a happy life after marriage. I think he’s at the right time for it! 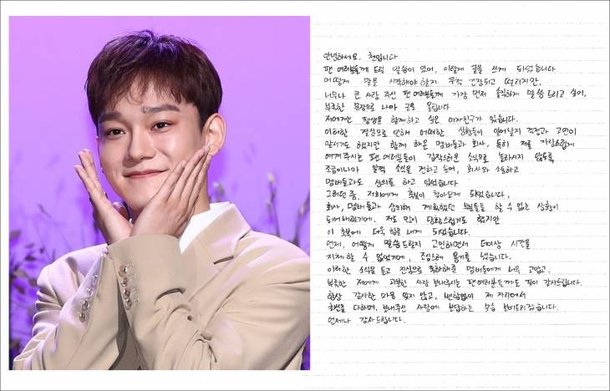 1. [+944, -86] No one said they weren’t allowed to love. But as idols, they should’ve managed themselves so that they’re not affecting their teams with their decisions while they’re still active idols. Would he really be marrying her right now if she wasn’t pregnant? If he wants to get married so bad, then leave the group first.

2. [+756, -85] Please just leave the group instead of impacting the other members with this

4. [+78, -7] No wonder he was sobbing at their concert and asking fans if they were going to stay with him forever, I was wondering what was going on ㅋㅋㅋㅋ it was because he was going to come out with this ㅋㅋㅋㅋㅋㅋㅋㅋㅋㅋ

5. [+75, -4] There’s nothing to praise him for. Of course he should be taking responsibility for the pregnancy. Imagine an active idol failing to use protection when he’s not even married ㅋㅋㅋ tsk

6. [+56, -3] Why bring Taeyang into this? He promoted without any scandals and only had one public relationship, which is why his fans gave him their blessing. It’s so different from a pre-marital pregnancy of 7 months.

7. [+51, -2] Taeyang was already in a public relationship when he announced in marriage and his decision did not impact Big Bang in any way. Different from Sunye and Chen.

11. [+38, -2] Wow, not even just a marriage but pre-marital pregnancy… that’s something even Taeyang and even SuJu’s Sungmin couldn’t accomplish… 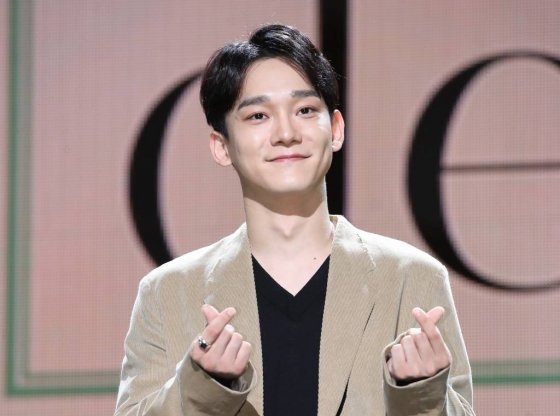 4. [+160, -5] I don’t find Chen problematic but from the perspective of fans, I think they’ll find the pre-marital pregnancy part more shocking than him getting married ㅋㅋㅋㅋㅋ

5. [+154, -5] I’d be pissed if I got a Chen card in their album… how can you fangirl over a baby daddy? ㅋㅋㅋㅋ It’d be so weird fangirling over someone else’s husband ㅠㅠ He should’ve managed himself better until the end of his contract…

6. [+149, -2] You guys pour your money into him so that he can use that money to buy a home and get married in ㅋㅋ and then you leave the fandom ㅋㅋ what a comedy

8. [+118, -16] Just leave EXO. Don’t turn this group into a ‘married man’ group and just quietly leave. DO and Baekhyun can cover the singing, it’s not like you have any big position that you cover. I’m not a personal fan of Chen so I don’t care if he gets married or has a baby but it really makes me angry that he’s affecting the group like this. I’m sure he didn’t plan for this but how could he not be careful? He should’ve been more careful if he was considerate of the other members at all. Kai’s dating scandal was practically aegyo compared to this.

9. [+107, -7] Hul, I’d leave the fandom. Getting married because of a pre-marital pregnancy is super shocking.

10. [+78, -2] He must’ve really enjoyed himself without protection. He should be embarrassed to his face his child. He hasn’t even served in the army… but I guess he’s more responsible than Kim Hyun Joong and Kim Jung Hoon.

12. [+60, -0] I think fans could support him if it was just wedding news but the pre-marital pregnancy part is probably what’s most shocking