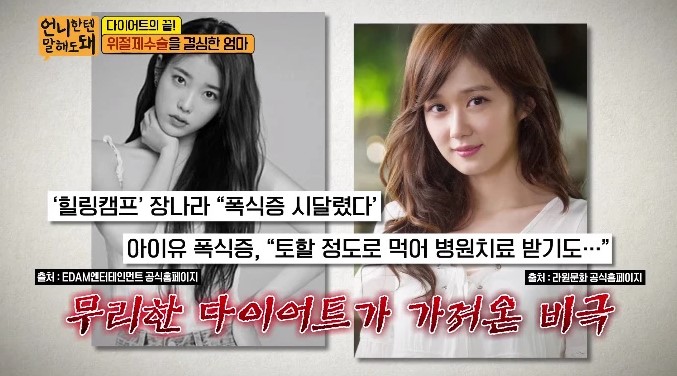 JYP’s former mental health specialist revealed, “When I counsel idols, I noticed that dieting was a big part of their stress. They’re under intense pressure to be skinny so they’ll resort to a lot of unhealthy diets. IU and Jang Nara used to suffer from binge eating disorders. When diet becomes stressful, your body produces more stress hormones and it becomes harder to lose weight. When the body is under stress, it feels hungry, not out of actual hunger, but because of a feeling of mental and emotional hunger. It’s also what causes yoyo-ing.”

1. [+392] I read comments from a lot of people saying that everyone struggles in life but at least celebrities get to make a lot of money through it. But that makes me wonder.. if being a celebrity is such a lucky, happy job, then why is the suicide rate for their profession so high? They’re under constant scrutiny from their looks to the way they sat and folded their legs at an event, bad facial expressions that spread into character controversies. They’re under constant attack from sexual comments, ridicule. Women already suffer from PMS + intense pain during their periods but imagine having to complete rigorous dances in those conditions, to always have to be smiling no matter where you are. Male idols practically sacrifice the health of their bodies to make their dances look just that much cooler, ignoring the pain of their knees as they slam down on it. I wish people would back off from such excessive criticism and judgment of celebrities.

2. [+84] Any average person feels bad when they hear that someone’s been gossiping about them or saying something mean… so imagine how celebrities must feel when they’re constantly being talked about over a split second of being on screen, all the rumors that come from it. These celebrities are people who survived cutthroat competition and worked through blood and tears to get to where they are. They’re precious to their own families. It’s unfair that they are hated on so easily.

3. [+56] I remember going “huh?” when a girl group member was like “all girls need to diet before debut no matter what” ㅋㅋ

4. [+12] I don’t think IU and Jang Nara’s binge eating disorder originated from their diets but rather from just stress when they were on hiatus.

5. [+10] No matter how much money these people make, they’re still human… why wouldn’t life be hard for them sometimes? If you hate someone or have a problem with them, just move on…

7. [+2] But are doctors allowed to say who is suffering from what disease like that?

8. [+1] ㅠㅠ Whenever I record myself on camera with my friends, I suddenly realize why idols have to diet so hard. I get that it’s to make your features stand out more but things like jaw fat get emphasized so much more on camera… I now see why celebrities are so obsessed with sharp jawlines ㅠㅠ