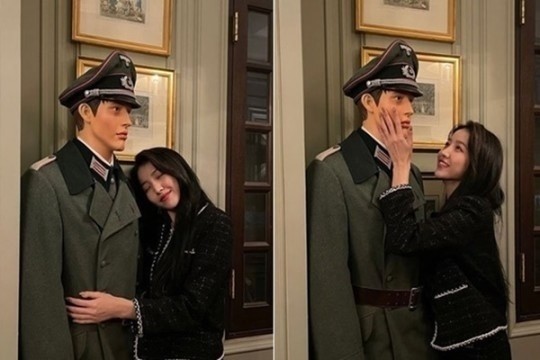 1. [+1,186] I’m not anyone trying to kick up trouble. Considering that this is a part of history that is deeply painful to certain people, I think she should’ve been more careful… Can you imagine if another foreign singer had taken a picture with a mannequin dressed as a Japanese soldier from our colonization? Everyone would’ve been upset and hurt…

2. [+1,041] We are so quick to hate on foreigners who take pictures with the rising sun flag so why are we accusing people of being ‘easily triggered’ just because this part of history doesn’t affect us?

3. [+478] I don’t know why there are so many comments saying “it’s understandable that this happened”. Imagine if a famous foreign singer took a picture with a rising sun flag or a Japanese soldier in colonization uniform? So many lives were sacrificed and lost in this, even if she didn’t know what it all stood for, she should’ve apologized without a doubt.

4. [+651] I think it’s understandable that she didn’t know. There are a lot of people who looked at this and didn’t see what was wrong. She apologized now so let’s leave her be and mind our own businesses.

7. [+291] Celebrities need to educate themselves more. Public figures should be held accountable to a certain level of knowledge.

8. [+79] The mannequin is Nazi-‘reminiscent’, there is no actual Nazi symbolism anywhere on the uniform. She admitted to her mistake and apologized so please don’t devolve the criticisms into hate ㅎㅎ Isn’t it true that it’s difficult to discern what the uniform is unless you’re an expert? It’s not like she intentioned for this to happen.

9. [+178] How are people supposed to live if you have to pay attention to every little detail like this..

10. [+63] I don’t think she’s a Nazi sympathizer or anything. I think she just saw a mannequin in uniform and took a picture with it. Stop trying to turn this into something it isn’t.

12. [+20] I highly doubt she would’ve hugged the mannequin if she knew it was a Nazi soldier… I don’t think she was thinking much of anything and just took a picture because it’s a handsome foreigner looking mannequin…