Highlight’s Yoon Doojoon curled up at home for a photo shoot with W Korea!

In the interview, he dove into detail about his life in the military, as well as his goals and thoughts after being discharged.

Yoon Doojoon was officially discharged in April. Due to the military’s COVID-19 protocol, he was able to be discharged during his last vacation without returning to the base. He commented on how he felt after returning to the normal life of a civilian, saying, “It still feels really awkward. I did a V Live yesterday, and today I’m doing a photo shoot.” 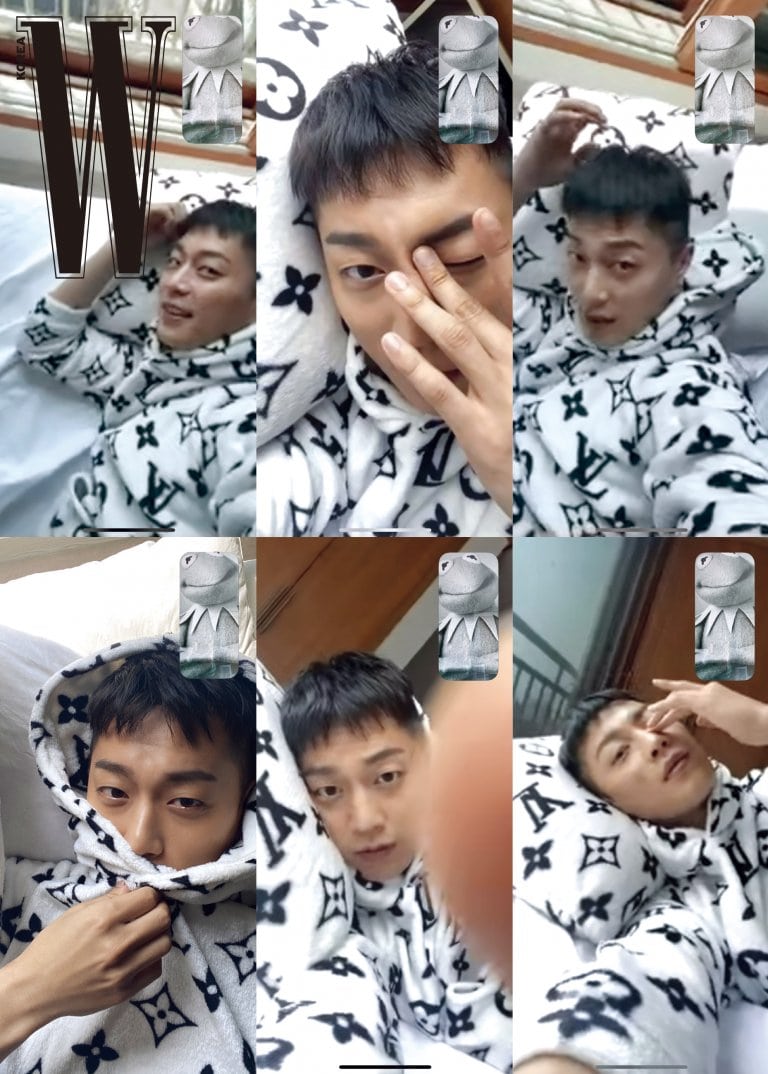 He revealed some details about his military service, explaining that he served in the 12th Infantry Division as a military policeman. Explaining more about the uniforms, he said, “When we get assigned to go out into the public sometimes, we wear civilian clothes and grow out our hair.”

Yoon Doojoon also went into detail about one of the meals he was served in the military, consisting of bread, a meat patty, a salad, and strawberry jam. “At first, I put it together and ate it like a hamburger. But eventually, I developed my own style. Whenever we’re served a meal with bread, there’s usually cereal with it as well. I would tear some of the bread and put it into the milk and cereal, then put some strawberry jam on some bread and dip it into the milk and eat it.” 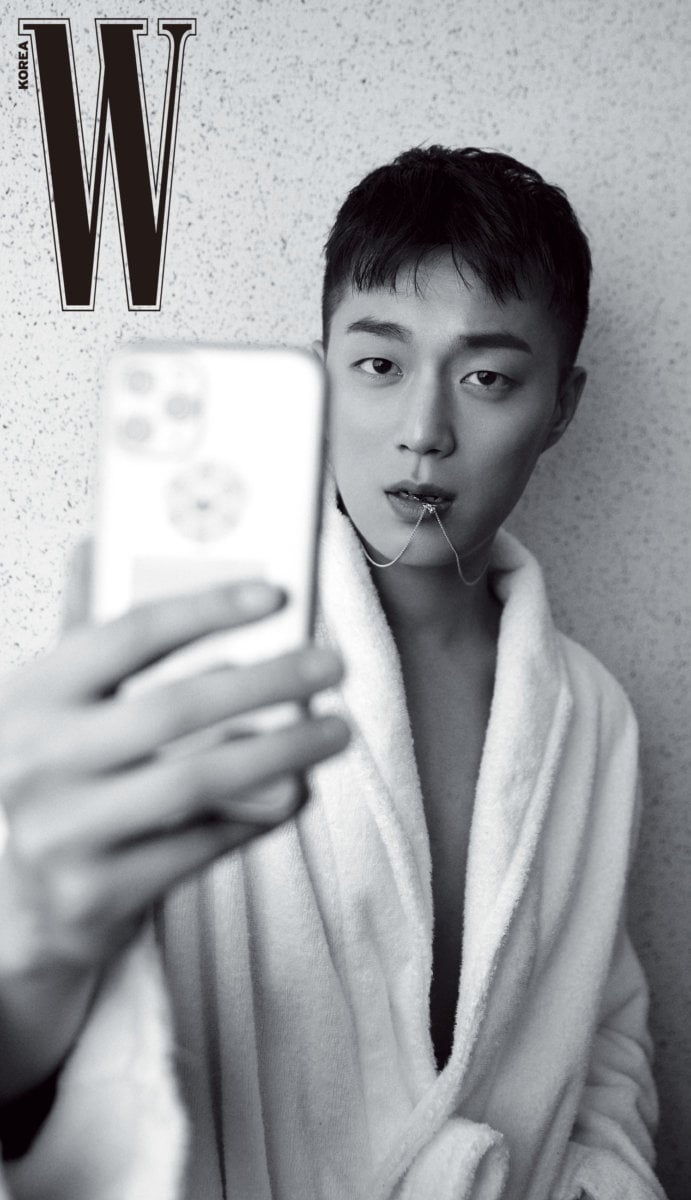 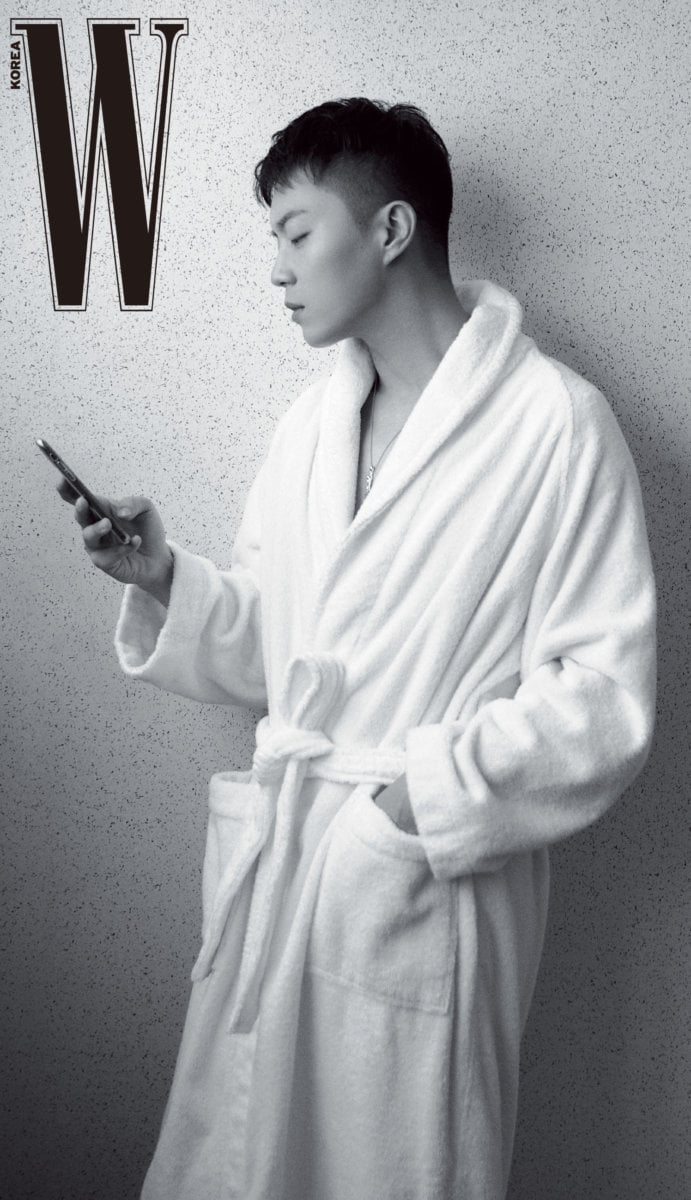 Yoon Doojoon’s enlistment in August 2018 came as a surprise to both him and the fans. He received the notice three days before he was required to enlist, and was in the middle of filming the drama “Let’s Eat 3” at the time. He said that due to his enlistment, the drama came to an early end. “I worked really hard to film for those three days,” he recalled. “On the day I had to enlist, I filmed until dawn and went straight to the hair salon to get my head shaved. I enlisted immediately afterward.” 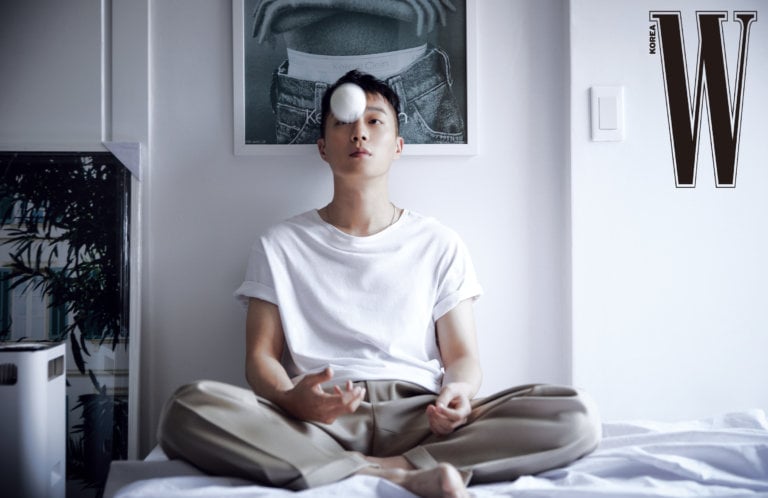 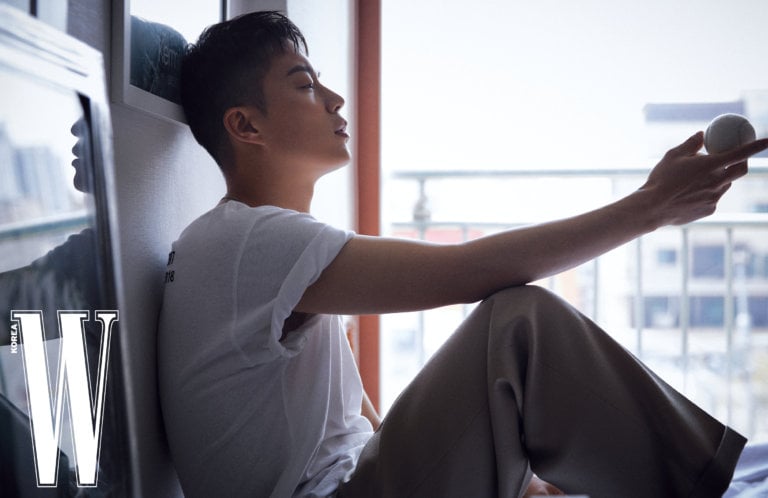 When asked if he had any goals while in the military, he responded, “Nothing in particular. Of course at first, like most other people, I had this grand idea that I would use my free time to study and experience a lot of things. It was kind of difficult to just let time pass by so there was a time when I tried to do different things, but eventually I just went back to the way I was living before. However, if there’s something that’s changed, it’s that I read books. These days, people in the military use the expression ‘melt.’ I ‘melted’ a lot of time reading books.”

Going into more detail about the books he read, Yoon Doojoon continued, “I looked at a lot of travel books, and tried to read a few novels but they weren’t really my style so I read a lot of essays. There’s a lot of books for us to read in the military. To get a vacation, there were self-improvement books that we could read, but I found it hard to read more than a few.”

He touched on an interesting tidbit of military life, explaining that if he read books on the required reading list and wrote book reports on them, he could collect mileage that could be used towards a vacation. “Of course, it depended on the style of the commanding officer or the battalion commander,” he added. “I wrote several book reports.” 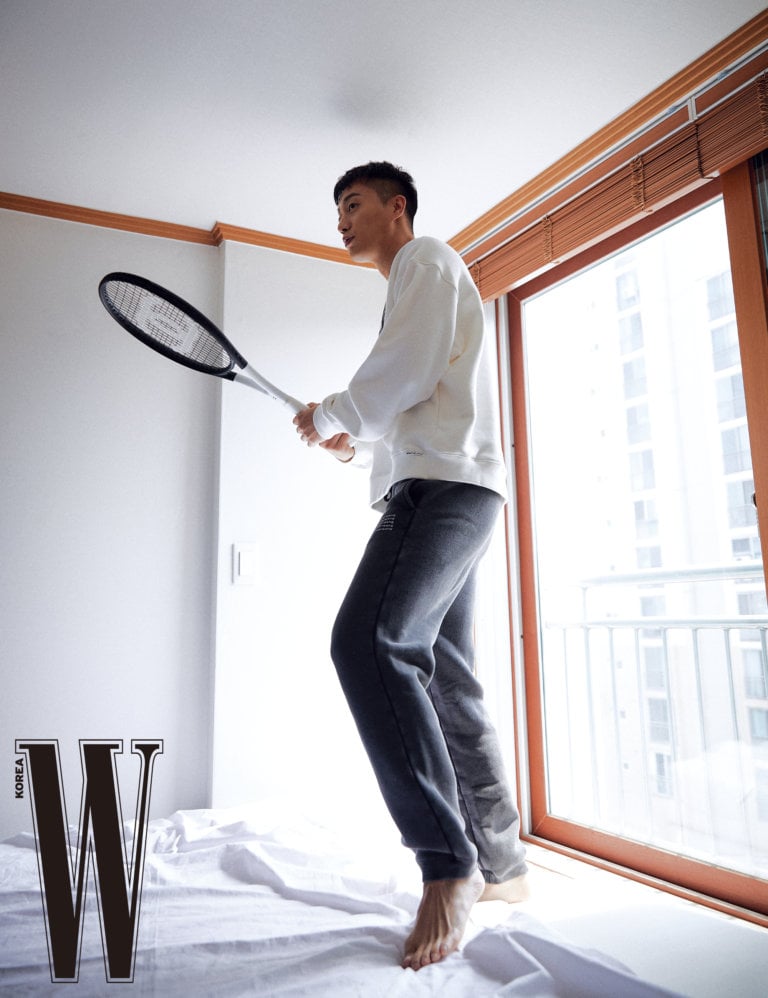 The interviewer then asked Yoon Doojoon if he received any attention for being a celebrity. “At the training center, I got a little bit of attention when we all showered together,” he recalled with a laugh. “But after that it got better so I went about my duties without hesitation. Originally I was kind of reserved, but after enlisting in the military that side of me changed. Among the soldiers there’s a special position called the “peer counselor.” Usually the older ones get assigned to this position, so I took on the role and was able to make conversation with a lot of other people.”

Yoon Doojoon spoke in depth about his role as a counselor, explaining that since he wasn’t professionally trained there was a limit to what he could do. He commented, “Whenever there were friends who wanted counseling, I would work hard to help them. To improve, I read books about psychology.” 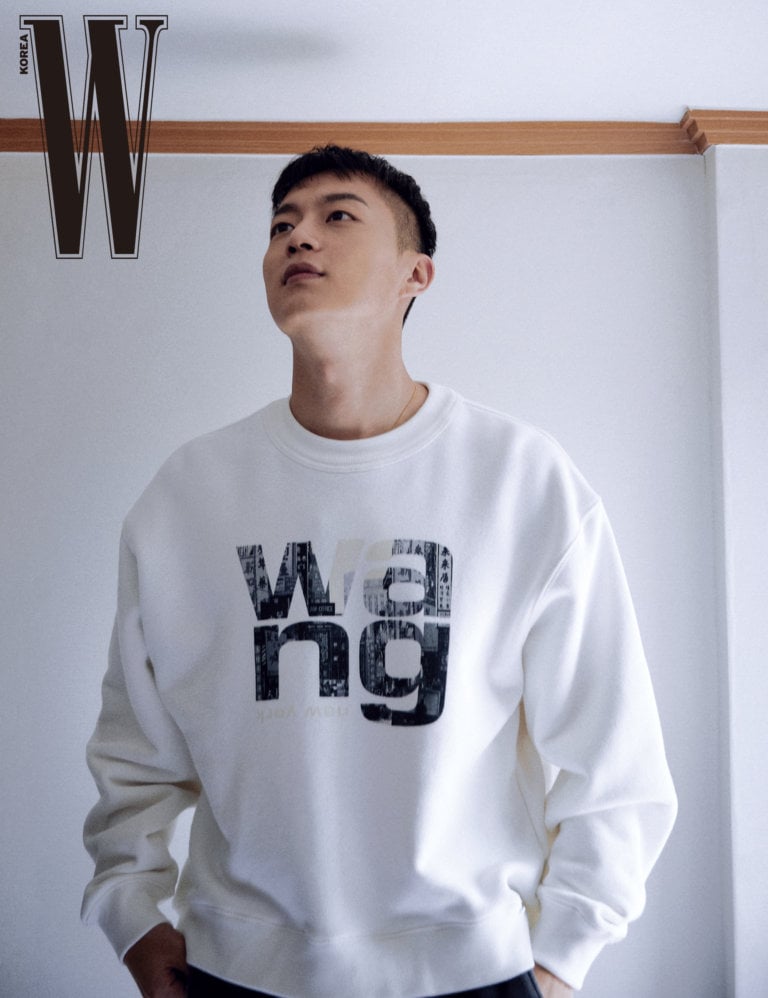 Returning to how he spent his free time, Yoon Doojoon reminisced on playing computer games with his fellow soldiers. “Since everyone played games, we would all go to a PC room to play together. We were all such different people and there was an age gap between me and the others, so I wondered if I would be able to fit in with them if it weren’t for games. I’m really thankful that they thought of me as the brother next door. They would all forget about my age until suddenly remembering, ‘Oh right, this guy is 32 years old [by Korean reckoning].’”

Turning the conversation to his career after the military, Yoon Doojoon spoke about how his intentions have changed. “If my intentions were originally to have a ‘long and impactful’ career, I would say my intention now is that I want to last for a long time. Rather than ‘a long time,’ a better phrase would probably be ‘so that everyone who likes me can be satisfied.’ Actually, it feels kind of meaningless to decide something like this, since it’s the kind of world where so many things and reactions happen in a fraction of a second.” 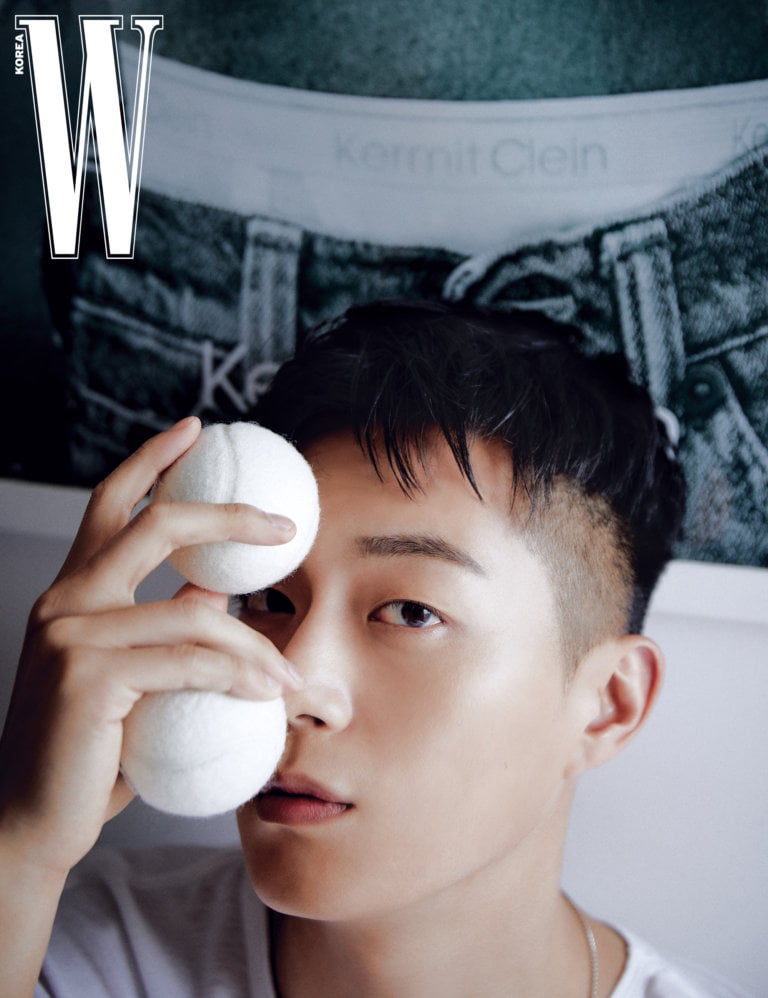 Yoon Doojoon also spoke about the times when he feels happy in his daily life. “Just things like silly jokes, soccer, and traveling,” he commented. “Happiness comes and goes in the moment, it isn’t something that you can maintain. So, those moments have to be frequent for you to feel happiness. I really want to go on a trip. Even though I went overseas often for work, I’ve never taken an overseas trip with my family. I made plans from the moment I enlisted. I even set the dates.”

After mentioning his family, Yoon Doojoon added that he called his mother every day when he was in the military. “I had to call her every day at 6 p.m. so we could both feel relieved,” he reminisced. “However, after being discharged, there’s been times where I’ve forgotten,” he commented with a laugh. 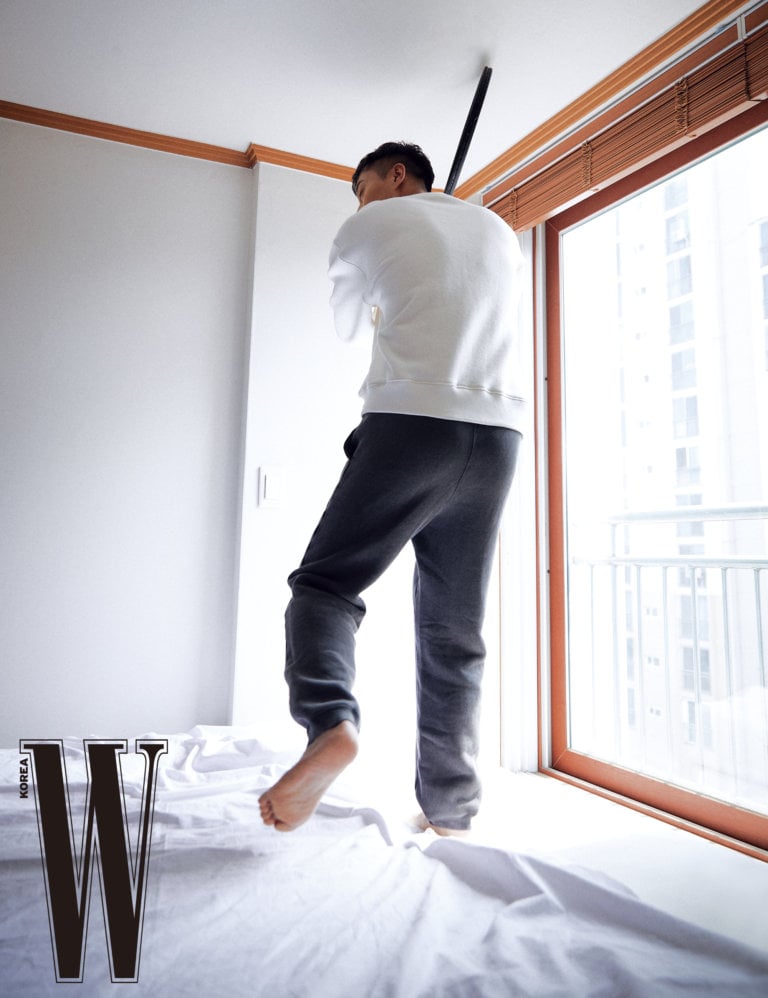 Yoon Doojoon concluded the interview by sending a special message to the other Highlight members who are still completing their military service. “They’ll probably get jealous seeing me doing photo shoots, interviews, and appearing on broadcasts,” he confessed. “I got discharged first because I enlisted first, so I know that kind of feeling. The only thing I can say is ‘Hang in there.’ The members are my closest friends in the entertainment industry. We’re so close that my friends even became friends with their friends. Seeing those kinds of connections happen is amazing and makes me feel proud. I really think there’s such a thing as fate.”