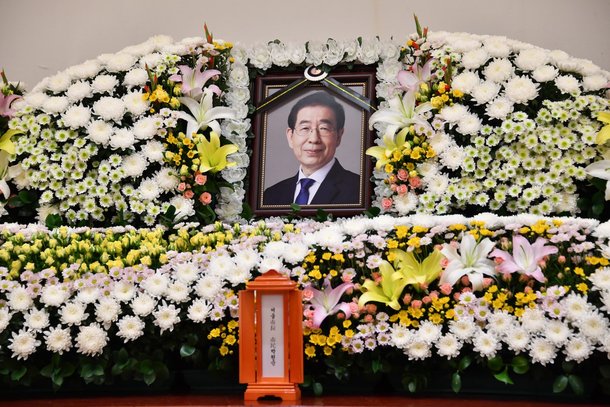 3. [+1,097, -105] The family should just stay quiet. There’s usually a reason why a person chooses death like that, and they should be considerate of the victim who likely has experienced something worse. The victim is now at risk of never receiving compensation or an apology for what she has endured.

4. [+124, -11] I guess the apple doesn’t fall far from the tree… How can they consider a sex criminal choosing suicide to mean that he is innocent because there is no possibility of the right of arraignment?

9. [+76, -5] How can they be so shameless?? He never would’ve killed himself if he was innocent, especially with how laws are so lenient to sex criminals these days. Why would he kill himself over sexual harassment of all allegations and not even assault??? Imagine how much more rotten things he had lurking in the back for him to do this? The family should apologize to the secretary instead.

10. [+64, -10] Since he can’t be charged in death, it looks like the family is looking to turn him into a martyr. The police had already decided to proceed with investigations which means there was enough evidence already. This family is really just proving themselves to be the family of a sex criminal after all. How shameless.

11. [+55, -1] The secretary needs to just come out with all of the evidence. It’s more important to protect the honor of the living than the dead.

12. [+45, -1] The family is just doing the victim even worse… I understand wanting to protect your own family but who would logically believe that the Seoul mayor who commit suicide the day after allegations of sexual harassment is innocent!!!… He himself was a lawyer who took on countless of sex crime cases. He knows the law more than anyone, and yet he commit suicide… The family needs to stay quiet and finish their funeral.