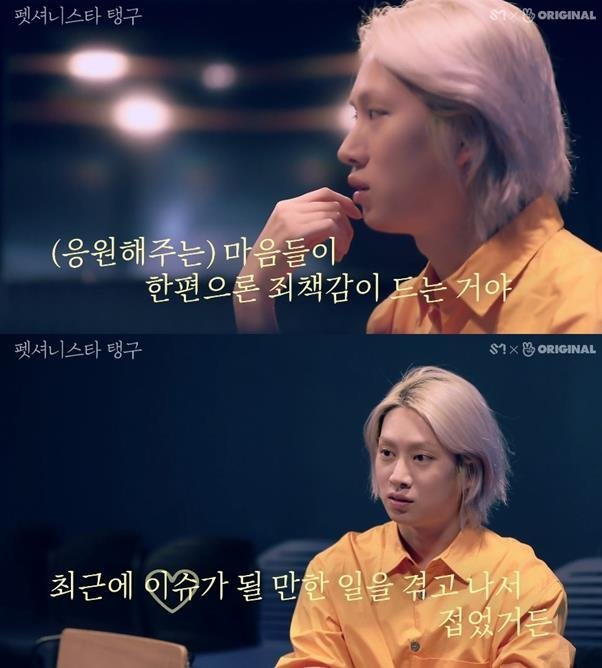 Article: Kim Heechul confesses feelings after relationship went public, “I felt guilty about the support of my fans, and postponed my solo album release”

1. [+766, -31] Kim Heechul is older now so it doesn’t really matter. He’s also cemented a career in variety. Momo’s still young and her group’s been going through a lot of scandals lately so their fandom’s condition is not the best…

2. [+546, -28] Twice’s fandom is the problem… seems like their mentals are just crumbling and they’re trying to hold on

3. [+476, -32] No one would ever put him down for dating… it’s just that there were accounts of people spotting him in Momo’s hometown two years ago which he denied so fans are just a bit upset at the lies?? Anyway, have a happy relationship ♡

4. [+55, -7] Why do I find it so hypocritical that Kim Heechul is choosing to use words sparingly on his own relationship when he has no problem bringing up scandals to other celebrities on ‘Knowing Bros’ and using them as gags? If he’s so careful and serious about his own scandal, shouldn’t he show the same respect to others?

5. [+37, -12] Momo’s staying quiet, not sure why Kim Heechul keeps sharin ghis feelings… not like he’s an active idol, he’s pushing 40 now. Why would the public or his fans blame him for being in a relationship ㅎㅎ

7. [+31, -0] No reason to feel any guilt ㅋㅋㅋ or are you feeling it because you got caught??? ㅋㅋㅋ Let’s be real, you had girls before Momo ㅋㅋㅋ just that you weren’t caught ㅋㅋㅋ

10. [+28, -3] He has no problem turning any guest on ‘Knowing Bros’ in a public relationship into the butt of jokes but whenever someone brings up his relationship, he looks all uncomfortable and keeps his mouth shut.

1. [+3,995, -217] Heechul-ah, it’s fine. I actually thought you were into men?! So I’m glad you’re dating a woman. Have a happy relationship. At least you’re feeling guilt, unlike someone… anyway, no need to feel any guilt. As long as you were genuine and truthful with your fans, that’s all that matters.

3. [+1,365, -125] He’s pushing 40, it wouldn’t be weird if we heard wedding news off the bat… Not sure why he’s so sorry… I wish all idols would have his mindset. I’m actually glad that he’s found someone to be by him while he’s grieving the losses of two dongsaengs. Don’t feel sorry~

4. [+663, -50] It just means that he’s that much older now. His situation is very different from other younger idols.

8. [+257, -32] Your fans have been with you for 15 years so they’re congratulating you now onj your first relationship but it’s not the same for us Twice fans so please stop mentioning the relationship so much, it pisses me off

9. [+208, -30] Super Junior fans are so damn selfish. Would they have been this supportive if he got into a dating scandal when he was 25 years old? ㅋㅋㅋㅋㅋㅋㅋㅋㅋ

10. [+193, -27] Your fans only care about you ㅋㅋㅋㅋㅋㅋㅋㅋㅋ they don’t care at all about the division happening in Momo’s fandom and how people are leaving one after the other. None of you know what Twice’s fans are feeling right now and keep leaving comments like “have a happy relationship” ㅋㅋ would you have been this supportive of him if this scandal happened during his ‘Sorry Sorry’ days?