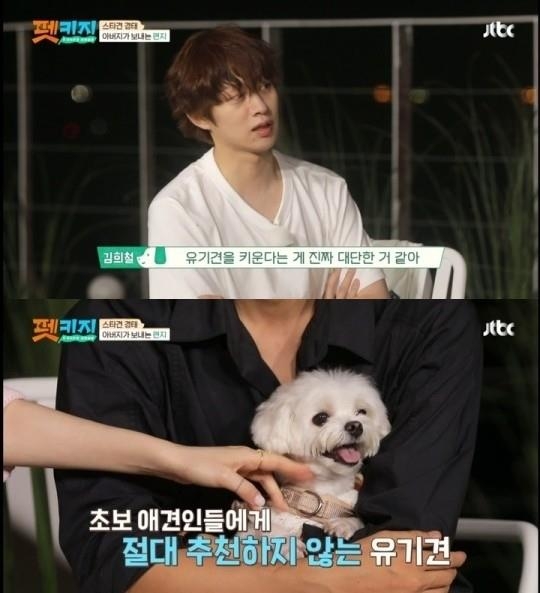 Article: Kim Heechul declares that he will be suing comments, animal rights org KARA expresses disappointment “We are sure he was upset but there are a lot of justified criticisms of his words”

1. [+486] I don’t think what he said was wrong. I would also like to stop inexperienced people from adopting rescues. Why should he have to worry about what animal rights organizations think about what he has to say? I don’t think it was his intention to turn people away from adopting rescues, any adult with a brain should know that… I think this is more of an issue of our society digging too deeply into what celebrities say.

2. [+384] Is it necessary for people to curse him this harshly over just saying that people should educate themselves before adopting dogs? And even if it’s his own bias, don’t biases always change? Just because his opinion is different from yours doesn’t mean you get to attack him to death. I actually think this taints the image of animal rights organizations…

3. [+378] Well obviously he’s not going to be suing comments that are criticizing him justifiably… but there are certain communities that are attacking him as a human being, practically cursing him out over all of this. That surely counts enough to sue, right?

4. [+236] We’re not twisting his words around. He said what he said in a way that would cause misunderstandings. Korean is very nuanced in that way.
– [+66] I agree with you. Korean is nuanced and it’s very disappointing to me how he’s handled all of this with the attitude that he could never be wrong.

5. [+319] I knew what he said would cause problems when I was watching him on TV. Kim Heechul-ssi, what you said was biased, no matter what. (As an owner of a rescued dog of two years)

6. [+141] Even if he positive intentions, he should’ve at least apologized if so many people took his words to mean something else. He’s being so stubborn 😢

7. [+97] But it’s true that rescue dogs require more attention than dogs that you raise since they were puppies

8. [+88] I can see why the animal rights organizations are taking issue with what Kim Heechul said… however, certain communities are practically putting a curse on Kim Heechul and taking it too far.

9. [+67] I think it’s important to understand what his intentions were. He never meant to outright tell people “never adopt rescues”, he just meant to point out that rescues might be more difficult than others and he spoke out of concern of the potential hurt that these dogs could suffer again by being abandoned a second time by an owner who wasn’t ready for that.

10. [+34] Not sure what these comments are going on about. Seems like a lot of people don’t understand why Kim Heechul is getting hate right now and it’s because he’s a public figure who went on a TV show about abandoned dogs and discouraged newbie dog owners from adopting abandoned dogs because of the difficulties. What we’re pointing out is that any newbie owner is a newbie owner whether they’re looking to adopt a normal dog or a rescue, it’s not like there’s some arbitrary level that we’re all divided into where one newbie is better equipped to deal with it than another newbie. He said newbie dog owners should not be allowed to adopt rescues so why shouldn’t people take issue with that? He also had a prior scandal where he said on another show that abandoned cats are difficult to raise and when people brought that up as problematic, he laughed at everyone on his stories.