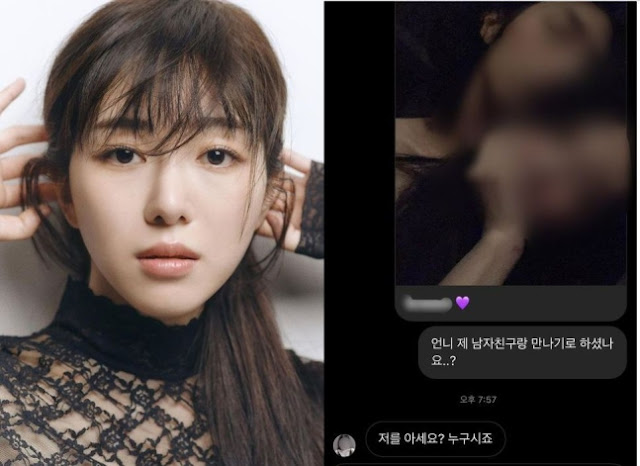 2. [+1,348, -12] The ex-girlfriend probably feels sick from the betrayal but Kwon Mina basically saved her from the trash awaiting her if they ever got married;;;… people never cheat only once, after all… ㅋ

3. [+1,002, -17] Getting into a some, keeping in contact.. that’s all cheating, what else could it be? Kwon Mina has nothing to be confident about just because she cut contact and ‘broke up’ with him. She should’ve been more diligent about this stuff before choosing to date him. And she also needs to stop focusing only on her pain and think about the pain she’s caused someone else.

4. [+964, -56] Kwon Mina just gets… weirder the more we hear about her. I felt sympathy for her at first from the group scandal but.. after seeing the way she acts, I’m starting to see why that might’ve happened.

5. [+241, -2] Birds of a feather flock together. Kwon Mina knew he had a girlfriend and still contacted him for art, and the man fell for it with no hesitation. These two will never be happy. I hope the ex thinks of this as a fortunate incident where she was able to get out and meets a better man next time.

6. [+241, -6] I thought Kwon Mina was the victim in this whole thing but she’s actually not. She posted a text conversation claiming the ex-girlfriend’s father is messaging her when those messages were actually directed at the boyfriend… And she obviously knew the guy had a girlfriend just by looking at his Instagram but she squeezed her way in and basically made them break up. She’s not normal. I’m starting to think she might not even be a victim in her group’s bullying scandal.

7. [+164, -4] Kwon Mina’s a funny b*tch. Why is she acting like her pain must be seen by the entire world but she doesn’t care about the pain she’s caused others??? There’s always multiple sides to a bullying case too. Someone who’s bullied might truly just be a shy, powerless victim, but they might also be doing sly fox sh*t that other people can’t stand. I’m starting to think Kwon Mina’s the latter. A thick skinned fox b*tch.

8. [+148, -0] It was cheating in the end. The boyfriend’s a mess. He probably got all excited getting a DM from a celebrity and threw his girlfriend to the curb. I think it’s better for the ex-girlfriend that they broke up. How embarrassing for the guy, though.

9. [+116, -1] I can see why the ex-girlfriend’s father blew up considering he let them live together before marriage on the consensus that they were working towards marriage

1. [+1,470, -33] Kwon Mina posted a text conversation claiming the father was messaging her but those messages weren’t even for her. She needs to put out a statement. She also had no problem setting snooty texts to the ex-girlfriend ㅋ Her cries for self-harm aren’t going to work anymore whenever she gets herself into a less than ideal situation.

2. [+1,303, -28] Cheating aside, there is a lot of problematic things about how Kwon Mina handled this. She’s a selfish person who centers her pain in everything without any consideration for the pain she caused others. She left a reply saying, “What about the other woman? I don’t even know her, what about my pain when I’m going through so much?” She has no empathy at all for anyone else and only cares about being consoled for herself.

4. [+906, -16] How barbaric of Kwon Mina. How can you just go for someone else’s man like that? And then post pictures of him all over your SNS as if you’re showing off that you stole someone else’s man? Did she think any of this would raise her worth as a celebrity? What kind of person would be a fan of such a sociopath?

5. [+419, -3] The couple seemed like they were doing fine before she stole the man. What a pathetic man for falling for it at all… Thank goodness the other woman didn’t marry him in the end.

6. [+345, -2] I can see why Kwon Mina is so hated. Her personality is so weird. She acts like she’s the sole victim in this, and this cheating scandal just shows what a selfish fox she is… totally the type that other women can’t stand. The boyfriend’s trash and I’m glad the ex-girlfriend threw him away to Kwon Mina.

7. [+229, -3] Kwon Mina needs to take a long hard look at herself before she claims being bullied… This makes me think that even the whole AOA scandal was a result of her whole victimization.

8. [+205, -0] Hul… she was going through all that mental trauma but I guess she still had the peace of mind to be stealing a man? Kwon Mina’s the type to exhaust everyone around her. Even if her story is true, I’m starting to understand how the AOA members might’ve felt around her, tsk.