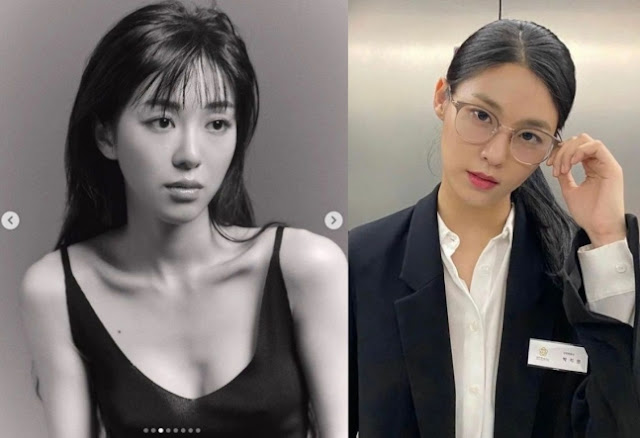 Article: Kwon Mina refuses to let SNS go, when asked why she criticized Seolhyun “she’s like a bat”

On the morning of the 5th, Kwon Mina said on her live, “All the accusations of me cheating or acting like a fox are true. I would like to genuinely apologize to the ex-girlfriend, friends, and family. I won’t be DMing with fans anymore. I am at fault in this scandal, it’s my mistake. It was my fault that talk of the cheating spread out. This live will be the last time I’m on SNS for the time being.” Unfortunately, Mina continued with the live to reveal, “There’s an AOA member who really likes having s*x”, which left a netizen to comment, “This is in the news now and community boards are making comments of s*xual harassment out of the member. Aren’t you going to take responsibility for what you said?” to which Mina replied, “Oh, you mean Shin Jimin?”

When another netizen asked, “Why did you write Seolhyun’s name in your will?”, Mina replied, “I had my reasons. Huge betrayal. She was like a bat. Up on her high status, she seemed like she didn’t care what happened to me. I’ll post up any specific details that I can find. By the way, Seolhyun and I were really close and depended on each other a lot. But there’s a reason why I mentioned her the way I did.”

1. [+4,055, -215] I can see why she was bullied now. If you know anyone like her around you, stay away… you’ll get wrapped up in their drama and lose everything. People who’ve been through it will know what I’m talking about.

3. [+1,219, -67] The way I see it, I think she had a bad relationship with Jimin… but was alright with the other members. And the other members probably kept their distance after observing the way Mina acts. And Mina deserved what Jimin said to her as the leader. She’s the one who skipped practice to go get hairline surgery. Jimin’s quite a tough cookie herself so I don’t doubt that she might’ve crossed the line but to take down all of AOA over that… is fooling the public, isn’t it?!

4. [+962, -70] Why does she expect Seolhyun to always be on her side no matter what? Seolhyun has a right to make her own decisions. Seeing her like this makes me think there’s a reason for everything, tsk tsk.

5. [+387, -5] Wow.. I used to feel sympathy for her and felt bad but… it’s almost like she took everyone down to drown with her. She victimizes herself, envious of others… She’s the type of person to exhaust everyone around her with her drama. I’d cut ties with anyone like her no matter what;; never keep anyone like her around you, tsk tsk.

6. [+298, -8] To all of you fools who keep shielding Mina by saying she’s mentally ill, go take a look at the Katalk conversations with that cheating boyfriend of hers. Kwon Mina knew what she was doing. She kept bringing up the girlfriend to check if there was any room for her to wiggle into. Just kept asking and asking. Then she uploaded a couple picture with him right away. You can tell a lot about her character from that alone. Stop excusing her saying she’s mentally ill. She’s the type of person who doesn’t care for evil or right as long as she fulfills her own greed. Don’t try to excuse hurting others just because she’s mentally ill… she’s just cruel!

7. [+292, -3] It’s hilarious to me that she thinks she did something by exposing someone for liking s*x when she’s the one who hit on a man with a girlfriend and posted couple selcas barely 100 days into their relationship ㅋㅋ

8. [+278, -8] Honestly, it seems like the members got sick of her antics and kept their distance from her and she interpreted that as bullying

9. [+233, -5] You can tell what happened by the way she talks about Seolhyun. They were super close as trainees but as Seolhyun started going up in popularity and getting busier with more schedules, Mina started to feel lonely and didn’t feel like she fit in with the others so she just started to grow with resentment over Seolhyun.