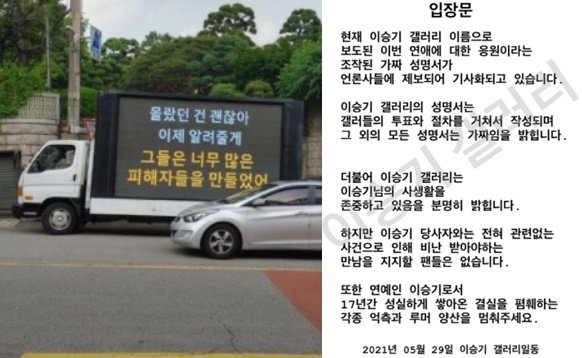 4. [+610, -4] I have a friend whose parents invested everything after trusting Kyeon Miri and lost everything too. It hurts to see Lee Yoobi and Lee Da In posting on Instagram like “our mom is so cool” and showing off their luxury goods and big homes. Imagine all of the households who lost everything because of them and aren’t able to support their own children anymore. These people don’t deserve to live a lavish life off of the money they made by scamming others.

5. [+595, -22] There’s a reason people say birds of a feather flock together. You can’t be naive enough to believe that Lee Seung Gi’s TV image is true and that he does’t see Lee Da In’s family for who they are.

7. [+520, -3] There are people who committed suicide because of this insider trading scandal. None of them should be allowed on TV.

9. [+420, -5] None of this happened when he was dating Yoona. These fans aren’t just acting like this because they don’t want their oppa dating anyone. They’re acting in his best interest.

12. [+317, -6] You guys really don’t think Lee Seung Gi didn’t already know this? He’s probably consoling Lee Da In as she cries over all of this right now. They’re in the honeymoon stage right now, you think they care about any of this? If anything, it’s probably just fanning the flames to their love.

13. [+292, -8] Lee Seung Gi probably likes this family’s black money too… As clean as his image on TV is, I’ve come to realize that birds of a feather is a true saying after all.

14. [+210, -14] Leave him be. It’s clear that he’s head over heels for her right now, there’s no path but straight ahead for him. He’ll come to his senses at some point eventually.

15. [+203, -9] I doubt Lee Seung Gi was not aware of something that the rest of us all know… this is just a case of birds of a feather. Please don’t trust the image of celebrities you see on TV. Lee Seung Gi chose this woman and he’s probably seeing these fans as beneath him.