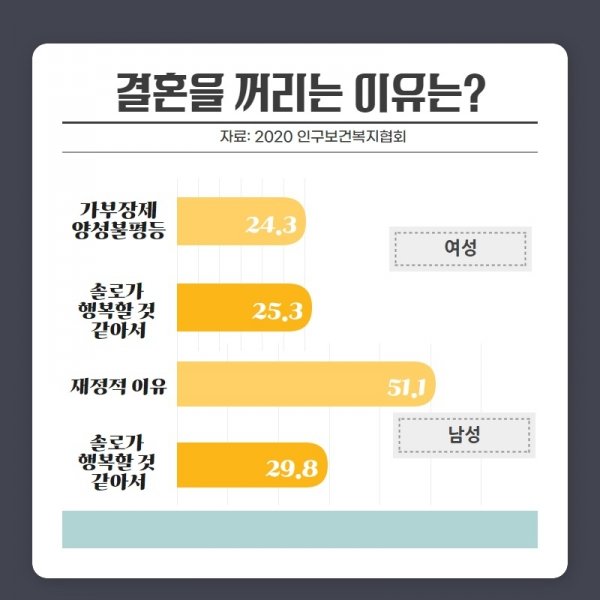 Reasons for being opposed to marriage?

Jang Jung Woo, 26, male, company employee: “Not getting married has become a reality. We’ve reached a society where it’s become a major decision to choose to get married than to not to. My reasons are financial but I have seen no reason to increase my lifestyle from an individual to a family. I think we need to step away from the notion that a ‘normal’ family only consists of a mom, dad, and a kid. If I have the means, I’d love to have a child, but we need to fix the system so that if a child has a birth story that’s different from others, they won’t be pitied for it.”

Kim Ji Hyun, 25, female, company employee: “Not getting married is my preference. I have my skepticisms about marriage and our patriarchal society but I have chosen not to get married even if I have the financial means to do so. I don’t want to deal with the drama of having in-laws and it’s just not a lifestyle I’d choose to take on.”

Hong, 26, female, company employee: “I want to be in love but I want to step away from the expectation of marriage. My older sister of four years got married and moved out from the family and my parents supported her by buying her marriage gifts and a down payment for the house, but when I wanted to leave the family to live on my own and asked for the same support, they said ‘absolutely not.’ Marriage is seen as a completion of something that’s deserving of support and choosing to not get married is seen as being ‘incomplete’. People don’t see that in the end, it’s all a decision that is made by an individual. I think the government needs to see marriage and birth rates as two different things. The government is still holding on to the notion that marriage = babies, which is why they’re still failing to raise the birth rates after 10 years. I dream of having a daughter of my own from a donor and living a happy life together. I yearn to give birth but our society does not give many rights to unmarried women and men.”

Kim Min Joong, 25, male, freelancer: “I decided not to get married when I felt that life was overwhelming enough for me as one person. Unless we’re wealthy, we’d have to both have jobs, and I don’t think it’d be easy to raise children with two jobs.” 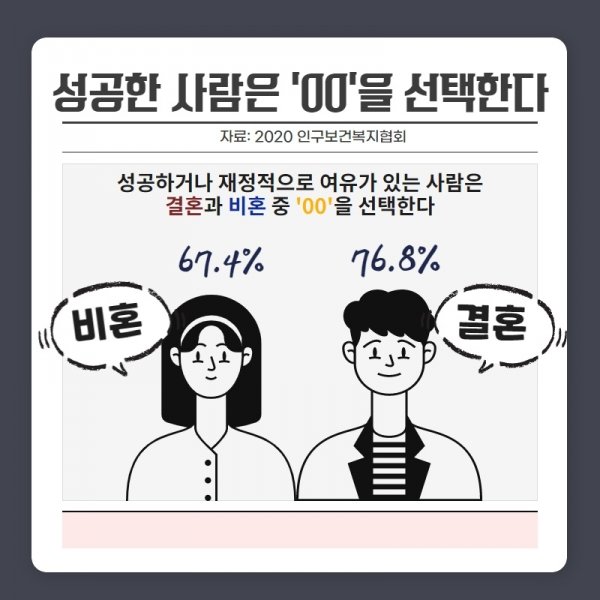 If you lead a successful life and have the financial means, would you choose to get ‘married’ or ‘not married’? 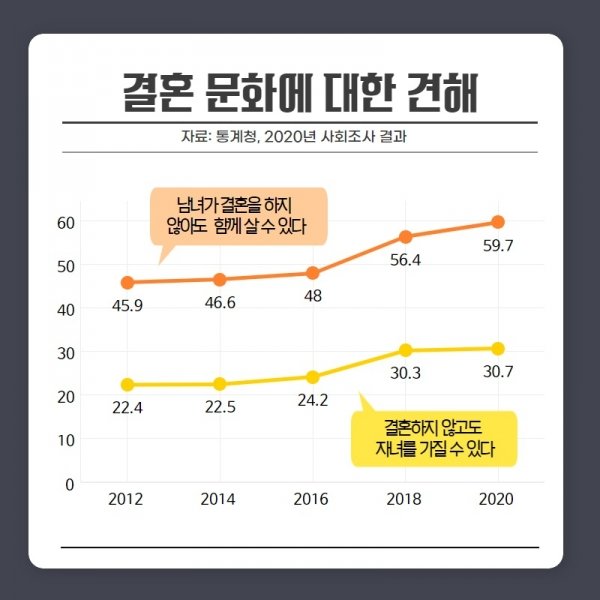 Changes in views on marriage culture

Article: “Is it necessary to be married to have kids?” 2030s increasingly choose not to get married, is there a solution to low birth rates?

1. [+877, -40] If you improve the quality of life for people, they will have kids even when you don’t want them to. The government just doesn’t know what the core of the issue is.

3. [+731, -37] We’re not living in the 90s anymore where people could dream up a dream and go out to achieve it. If you’re poor and decide to have kids, you’re basically starting them down a path of a tragic life. Even wealthy golden spoon couples are limiting themselves to one kid.

4. [+82, -17] When women get married, they’re expected to not only make money at their jobs but handle all of the house work and child rearing alone, on top of taking care of their in-laws. Men don’t have to change a thing since their bachelor days because the women do it all for them ㅋㅋㅋ Ladies… if you’re really in love and want to get married, don’t have kids. Hell opens up the moment you have kids. I say this from experience ㅠ

5. [+72, -16] I’m an ajumma in her fifties. If my daughter were to talk about getting married, my first thought would be “oh no, I’m not that good at cooking, what could I make for my son-in-law when he comes over? I’m not ready yet”… but for a woman with a son? Her first probably will be “ah, my life will get easier once my son gets married. Less work for me to do over the holidays.” She’d probably already be on the phone nagging her daughter-in-law before the marriage already went through. To all of the Korean ladies out there, I suggest that you do not get married. Do not get married to Korean men.

7. [+53, -13] Sayuri showed a path that women who do not want to get married can take. You can free yourself from the chains of marriage and just focus on raising your own kid. You don’t have to worry about suffering because of your husband and the details of divorce and child support that the man probably won’t pay anyway.

8. [+48, -5] I chose not to get married and spend my money on donating to children’s foundations. I’d rather just take care of the children who already exist.

9. [+43, -8] Fix the housing crisis and people will find a way to get married and have kids. At the current rates, are all of us just expected to pay debt until we die?

10. [+38, -2] All of the job are centered in big cities with no housing. The suburbs are full of housing but no jobs. The government needs to lower housing costs in Seoul and increase the jobs available in the suburbs.