Article: Kwon Mina, “You’re suing me and mom? It’s like X”, this time exposes her sister

Former AOA Mina is alleging her sister swindled money and defrauded her name.

On the 5th, Mina wrote another lengthy post on IG and stated, “It wasn’t enough that I had to suffer because of Shin Jimin but now I have to suffer at the hands of my unni too. Seriously, my life is s***.”

“You said you’d take care of the taxes and I’d help reduce the burden but you didn’t return the rest of the money to me. Even mom thought it was strange. You took such a large sum of money without permission and won’t even return it? Even if the funds were used for business.”

“I only agreed to lease the Benz for mom. I worked hard since we were kids to make money to help mom not you. Wake up! But suddenly when I got to the café I saw two stamps. And a Maserati? You’re saying you got it because it’s comfortable but why did you buy it under my name when you can’t afford it? It’s only recently that I found out the owners of the Benz and Maserati changed.”

“Since last time you’ve accused me of tax evasion. You were so confident saying you’re going to report me. Come to think of it, I don’t know what I’ve done wrong. My friends will soon know what kind of person you are. I didn’t think about the benefits you got from me and did my best to help you with your business. How could you accuse your only dongsaeng of tax evasion? This thing will get bigger. Let’s air it all out. I’ll confidently accept all the investigations. It was you who said you’d take care of the taxes first. I won’t collapse anymore. I’ll face everything confidently.”

“Apologize to Shin Jimin? Don’t do XX? If you can’t reveal any evidence why threaten death?” Shin Jimin bullied me for 10 years! I was caught spitting swear words that I couldn’t say for 7 months and people are calling me a psychopath. Everything is already so unfair, do I have to just shut up and live? And now, do I have to fight my unni? What can I do when everyone is on Shin Jimin’s side. I feel like dying because I can’t give any evidence. Let’s all die.”

“You’re going to sue the woman that gave birth to you and me? Is that a family unni? If you have any shame, return the money mom gave you.” 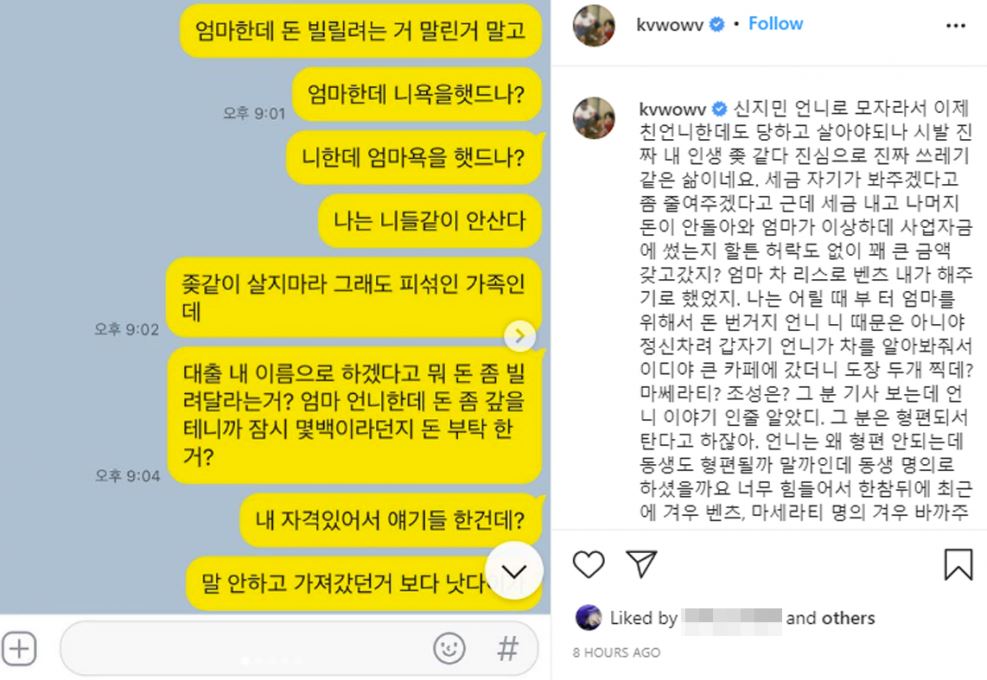 In another post, Mina exposed more katalks and wrote, “Didn’t you say you want to send her to a nursing home? And I got angry and told you to remember how hard she worked since we were kids? Where do plan to take her? A sanitarium? Mental hospital? What’s wrong with mom that she needs to go to a place like that. You go!” 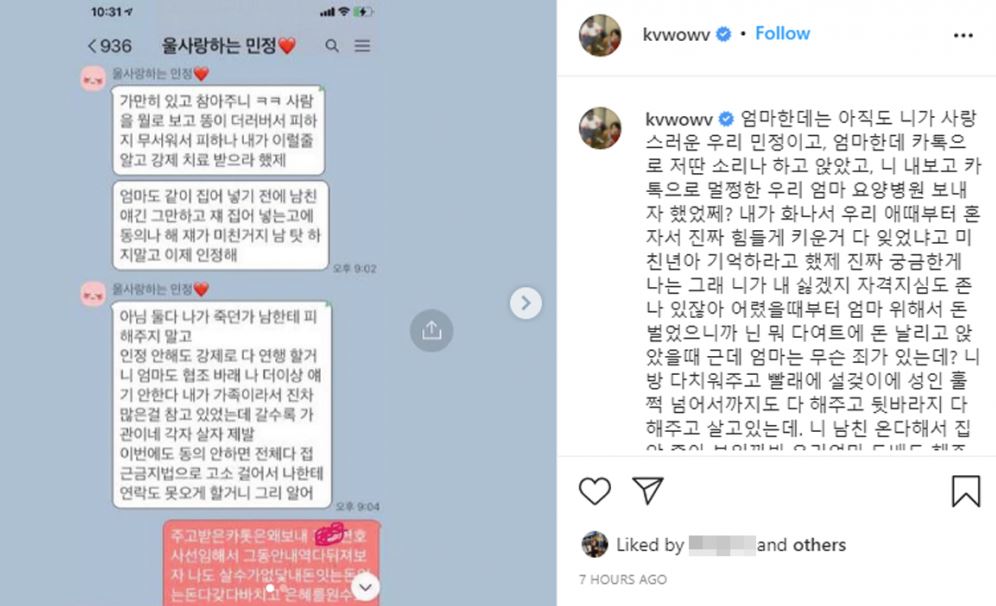 In another post, Mina retorted to netizens who had commented in support of her sister and shared more screenshots and wrote, “Someone said me and my mother should just go and die. I turned off the comments after I saw comments defending it.”