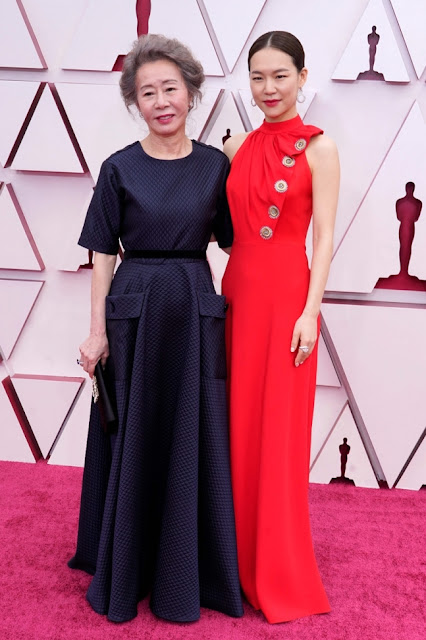 6. [+780, -7] I’m sure she didn’t intend for this to happen but I do have to admit that I was shocked when I came across her picture. It’s quite obvious to anyone’s eye that her hair style and dress are Chinese influenced. It’s not a requirement for her to wear Korean designers but considering that the Academies are watched by people all over the world, why did it have to be today that she chose to wear this ㅠㅠ

7. [+665, -14] Louis Vuitton often designers with Chinese consumers in mind. Just because it’s not a Chinese style doesn’t mean there aren’t Chinese influences in it. And the dress is from 2018… why would you wear a three year old dress to the Academy Awards of all places? This doesn’t feel like a coincidence.

8. [+557, -6] She has a great body, she’s popular… and yet she chose a dress that’s three years old in a color that doesn’t even match her all the way to the Academy Awards… I’d like to hear her reasoning on this one.

9. [+512, -6] If she was thinking at all, I don’t think she should’ve worn something as red as Chinese red to the awards. She should’ve also kept in mind to help Youn Yuh Jung shine more since she’s the nominated one but she chose a dress that stands out more than hers.