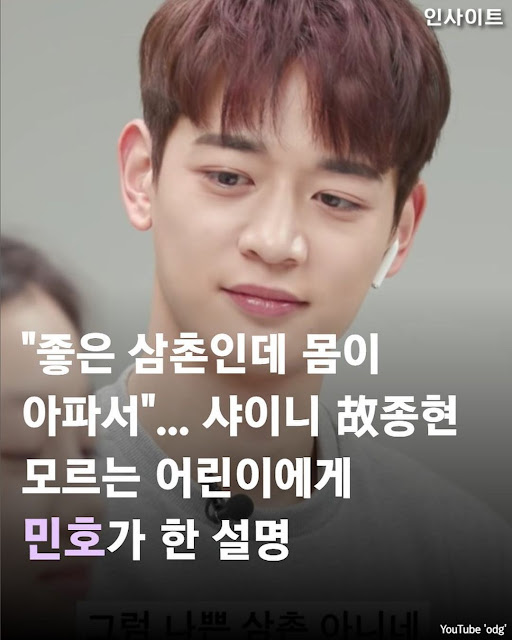 Article:  “He’s a good uncle but he’s not well”… Minho explains the late Jonghyun to a child

3. [+267] ㅠㅠ… My heart clenched when I was watching ‘Knowing Bros’ and Kim Heechul kept saying “you five guys”, “all five SHINee members”…

5. [+73] It’s just a screenshot but Minho’s facial expression is so sad that it’s making me tear up

8. [+33] I choked up ㅠㅠ I choked up even harder watching him speak about it so kindly and placidly ㅠㅠ 😢

3. [+104] I’m not a SHINee fan or even Jonghyun fan but every time I listen to the song ‘Breathe’… I feel so sad… and tear up at the thought of how difficult.. lonely.. and painful he must’ve felt.. so upsetting..

4. [+150] I choked up seeing the space they left for Jonghyun when they were dancing the medley on ‘Knowing Bros’ 😢

5. [+17] Truly an innocent question by the child because she doesn’t know and yet it’s so sad…