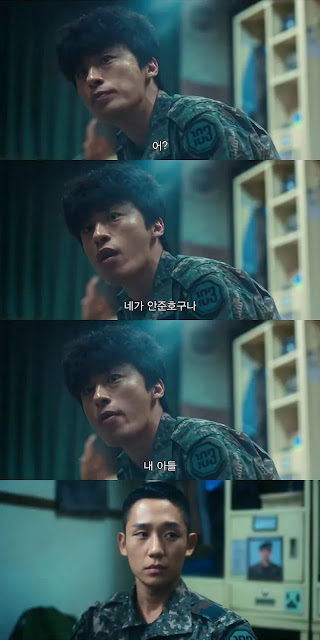 Article: The line that only men who have served will understand in ‘D.P.’

TN: Korean army has a culture where the soldier who enlisted exactly a year before you becomes your ‘father’ (same serial number a year apart) and acts as your mentor

2. [+294] Father and sons are what people call each other when they enlisted exactly a year apart. Someone who enlisted in 2020 September and 2021 September is father and son ㅋㅋ Just someone who shields you from everything and buys you snacks sometimes ㅋㅋ

– [+21] Hmm.. yes, it’s a culture thing~ It’s not like sons can go around causing trouble just because they have a father to watch their back. It’s more about the small mistakes sons might make and get in trouble for, and the father will step up like “hey, why are you yelling at my kid” ㅋㅋ There are so many instances where you can get in trouble for in the army and it’s usually your father who will watch over you and buy you some yummy naengmyun or ramen…

– [+2] I also think it’s a time of reflection for the fathers, to see someone enlist during the same season as them and go through all of the same hard work that they did. It helps you look back on your own year. Most fathers will pass down any useful items down to their sons when it’s time to discharge.

“When I was about eight months into service as the maknae of my squad and taking the abuse for everything, my father number quietly pulled me aside, bought me a drink, and told me to find strength, that it’d get better once I wasn’t the maknae anymore. I almost cried when he told me that.”

“It really does feel great when your father takes care of you… sigh, it was hard.”

“There was only one senior who enlisted on December 2012 but 9 enlistments on December 2013 including me ㅋㅋㅋ he joked around by telling us to salute with baby cries instead! I miss him now ㅋ”

“When I was serving and getting yelled at by my seniors and learning everything on my own, my father came and started teaching me things and ordered his own juniors to come help. I was so grateful… When I look back, I was so touched when he first told me, ‘You’re my son. I’m your father.’ I was all alone as the maknae of my squad and it felt so good hearing that.”

“When everyone is so busy passing down the chain of abuse, my father was someone who helped me catch my breath. It’s a great tradition.”

“My heart felt at peace as soon as I heard him say son..”