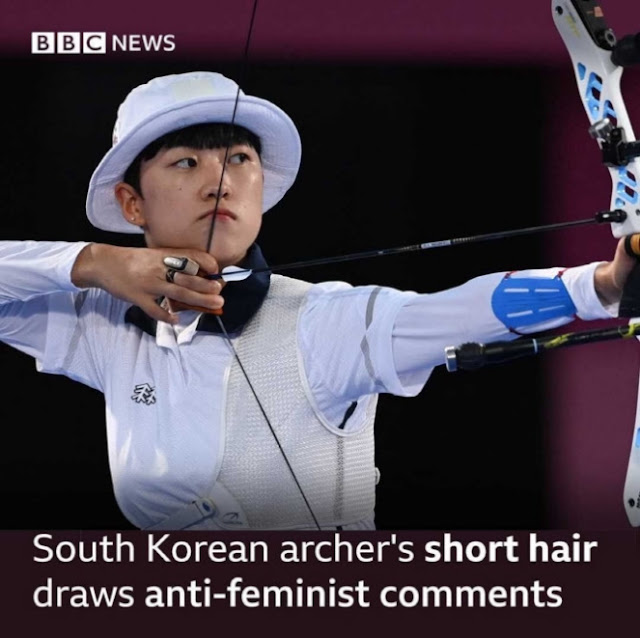 Article: Foreign media speak up about ‘An San’ controversy… “They are like ilbe”

2. [+4,597, -826] Both her short haircut and her identification as a feminist are nothing problematic but Korean men are making them out to be an issue. And now that foreign media are taking note of how embarrassing they are, they’re running around claiming it’s “fake news” ㅋㅋㅋ The foolish words of Korean men have been noted all over the world and now you’re running away?

3. [+3,869, -293] The majority of the top posts no male community boards are still about confiscating her medal, s*xually harassing her, and even death threats. None of this is “fake News”. You thought the foreign media outlets would have your back but even they’re putting you guys down. I see some men even try to claim that the female communities staged this entire thing but that’s so pathetic of you to even make up. You took a dump on the ground so you clean it up and take responsibility for it.

4. [+3,479, -229] Being a feminist is not even a crime. She had only won two golds and hadn’t even finished her last match when everyone was hounding her on her articles, demanding her to explain herself, demanding that she return her gold medals ㅋㅋ You men only have a platform here in Korea but go overseas and ask anyone if feminism is a bad thing and see how they respond to you ㅋㅋ

1. [+4,682, -485] I’m so… embarrassed. Our athletes work so hard for our country but these ‘men’ are making a mess of everything. The article’s right, Korea ranks in the dozen when it comes to economic prowess and yet we still haven’t escaped our male-centered society. Please, if you’re thinking of doing something stupid, think it by yourself… As if the entire world knowing about your hidden camera antics wasn’t enough, now everyone will think of our country as backwards on character and gender equality ㅠㅠㅠㅠ

2. [+3,824, -257] Who cares if Ahn San is a feminist. She’s our national athlete ㅋ The fact of the matter is, male community sites have been demanding that she return her medal all because she has short hair.

3. [+2,370, -246] Korean men first attacked her for her short hair, then for graduating from a women’s college, for being from Gwangjoo, for liking female idols, then dug through her Instagram to claim she used feminist terminology, and then began demanding that she return her gold medals only to turn around and try to blame feminists for this entire controversy when Ahn San herself is a feminist. First of all, I have no idea why her being a feminist is an issue at all that needs to be this controversial. They took issue with the fact that she had short hair = feminist and now they’re all acting like they never said such a thing;;

4. [+1,522, -39] Male community sites have been trying to shift the blame to feminists… ㅋㅋㅋㅋㅋㅋ but screencaps exist, and it’s just pathetic at this point… how bored do you to be to go this far;

5. [+634, -19] We work so hard to build up our country only for the men to bring it down with hidden cameras and gender discrimination ㅋㅋㅋㅋㅋㅋㅋ what’s so wrong with being a feminist?????? We’re simply asking you to view women as human beings ㅋㅋㅋㅋㅋㅋㅋㅋㅋ stop watching hidden camera videos, stop s*xually harassing women, start recognizing women for their talents over their looks, start sharing the housework chores, stop assaulting women… that’s all feminism is asking for, why is that such an issue?