No but it was already eba that they had overseas tours for their two teams at the same time but is this right? Seriously?ㅋㅋㅋ What’s worse is that up until now, 127 had a Korean and foreign tour + Dream had a Korean concert but this is what’s ahead for themㅋㅋㅋ There’s still so many tour dates and there will be a lot of year end award shows too 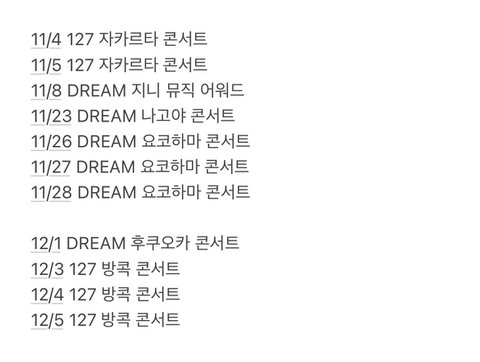 It’s 100x better than having no schedule. Just look at WayV and SungSho from NCT, just look at how they had no solo schedules during their hiatus. Nobody knows what they are doing if they don’t go on Bubble. Do you think that they are having it worse than having no schedule? Not having anything is even harder. Jeno said it too right? That when he was on a hiatus, he rested a lot but he started thinking those things

No but I’m a fan of another group who doesn’t about them at all but it’s true that they are overworking them. Why are you asking us to think about the members who have nothing?ㅋㅋㅋ Who will find it easy to have overseas concerts every 2 days? You guys are whinning about having it hard just to attend school or go to work

Why are people randomly saying that being busy is better? Just go write a new post asking SungSho to get more work then. Why are you guys coming here to make a fuss? It’s true that they are busy and that they seem to be having a hard time

Better than having no work

My bias is only doing DREAM. I’m inwardly jealousㅠㅠ

That’s why I hate Mark and Haechan’s fans