However, when it comes to men’s perspective…

Single man in his 20s: “If they are demanding us to be handsome now, I think that it will be hard for us to get married.” 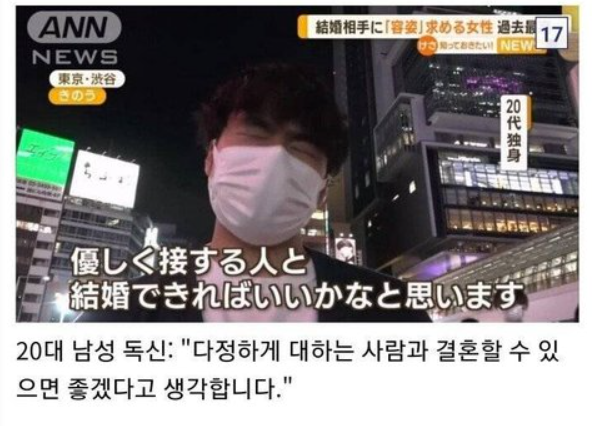 Single man in his 20’s: “I think that it would be nice to marry someone who treats you warmly” 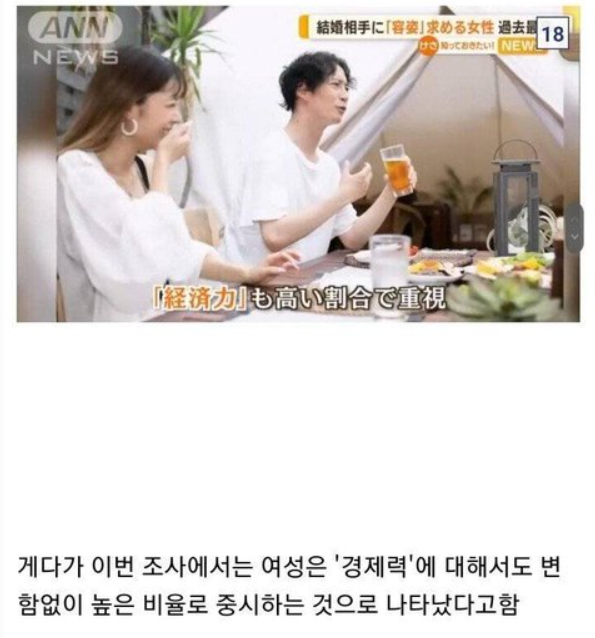 In addition, in this survey, it was found that women place importance on ‘economic power’ at an unchanged high rate.

Japanese women are more and more picky about looks

And they also look at economic power on top of thatㅇㅇ

To be honest, isn’t this the reality?

Also, I’m jealous at the fact that they can be so honest about their preferences

If you look at Japanese dating programs, you’ll see that Japanese girls say honestly that they like tall men and men with financial power and I’m so jealous of them.. Our country have Hannams with inferiority complex labelling us as “Kimchi-nyeos” all the time so we can’t even speak up. (T/N: “Kimchi-nyeo/Kimchi-b*tch” means a materialistic girl who’s dependent on her partner/her family’s money)

Seriously, Japanese women can openly talk like this without being attacked by Japanese men… Just imaging Korean women speaking like this. They would be hated on male community sites for the next 10 years

I think that it’s severe how Hannams always frame Japan and Japanese women the way they want… But in the end, Japanese women look even more at looks and economic powerㅋㅋ Japan’s marriage age gap between partners is even lower than Korea… They are the Asian country with the smallest marriage age gap so why would they even date you old and ugly Hannams?

The top actresses in our country also have economic power so that’s why they are all dating men 10 or 8 years younger than themㅋㅋㅋ It’s a fact that the more a woman has goo specs, the more a man’s age and looks become important to them

Is it ok for them to talk like that on broadcast? Aren’t they gonna get doxxed??

2. Since I’m the one taking care of feeding you, just look at me with a pretty smile

3. A face is more important than money. Seriously, just try being handsome, there is an overflowing amount of women who will feed you even if you were unemployed

4. Seriously, whether it’s back then or now, the face is the most important

5. If I’m pretty and had power, I wouldn’t mind feeding you. A kid who doesn’t have anyone else but me? That’s so thrilling. It’s the best

7. I look at economic power… I don’t really care that much about the face

8. Seriously, a good face is important. Even if I was mad, my anger would subside if I looked at you

9. People have always said that pretty and handsome parents will make pretty daughters. Seeing the people around me, it really seems to be true… it’s important for the 2nd generation too

10. If you don’t have money, of course you need to have a good face