I’m not only referring to celebrities, but people even bash commoners here. Even after they get reported, they don’t delete the posts and they  purposefully act like trash. There’s no other answers than to abolish the site. Please everyone, sign this 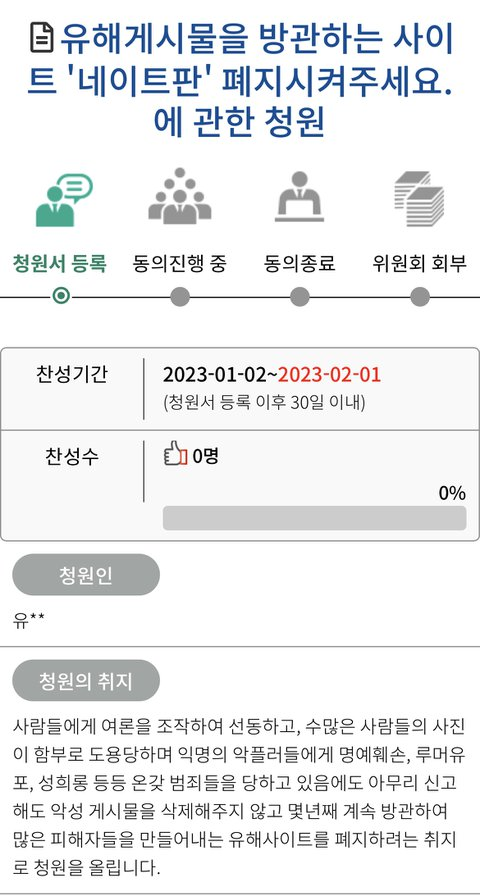 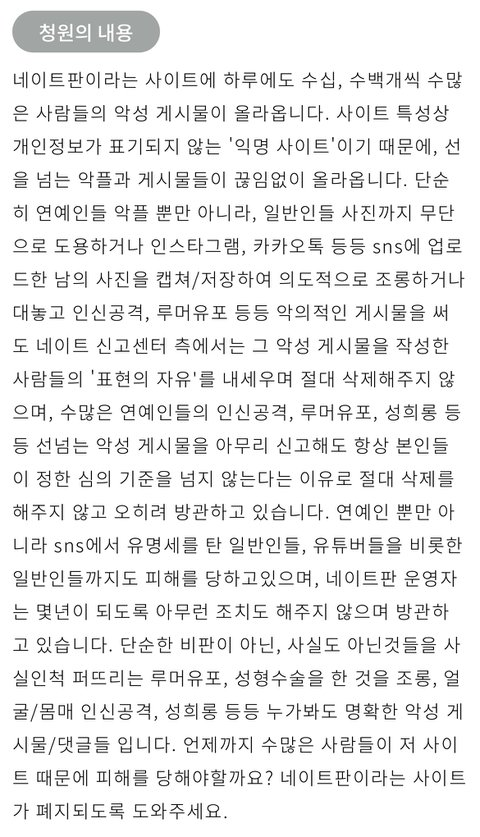 Purpose of the petition:

Instigating people by manipulating public opinion, having photos of numerous people stolen, and being subjected to all sorts of crimes such as defamation, spreading rumors, sexual harassment, etc. I am posting a petition with the intention of abolishing harmful sites that create victims.

On Nate Pann, dozens to hundreds of malicious posts are uploaded by countless people every day. Due to the nature of the site, it is an ‘anonymous site’ where personal information is not displayed, so malicious comments and posts that cross the line are constantly uploaded. Not only malicious comments for celebrities, but also photos of commoners are stolen without permission from SNS such as Instagram, KakaoTalk, etc. are screencaped/uploaded, intentionally used to ridicule them, or openly attract personal attacks, spreading rumors, etc. Nate insists on the ‘freedom of expression’ of the people who write these malicious posts and never deletes them, and no matter how many celebrities report malicious posts such as personal attacks, rumor spread, sexual harassment, etc., the reports never exceed the “standard” for the actual claims so no actions are taken.

Not only celebrities, but also ordinary people who became famous on social media, including YouTubers, are being victimized, and Nate Pann operators have been standing by without taking any action for several years. These are malicious posts/comments that are not simple criticism, spreading rumors that pretend to be facts that are not true, making fun of plastic surgery, personal attacks on face/body, sexual harassment, etc. How long will countless people have to suffer because of that site? Please help get Nate Pann get abolished.

But seriously Nate is problematic and it’s true ㅋㅋㅋ If you go on Theqoo or Instiz, or other communities, you can tell that the moderators are actually trying to moderate, but on Nate Pann, no matter how much you report posts, they would rather die than to remove the hate postsㅋㅋㅋㅋ Even for my bias, they receive so much hate and I know their posts get reported a lot because I do (I even went as far as calling the report center) and they don’t even moderate at allㅋㅋㅋㅋ They do real-time monitoring, but I can tell that they’re purposefully letting the hate posts slideㅇㅇ At this rate, we need to flag this site as a harmful site

Huh but even websites like Ilbe and DC are still alive, so why would Pann close down?

If we can’t abolish this site, let’s reveal all our identities

I feel like this would be good if the post made it to the trending page. Kids, let’s sign the petition. I really hope that Pann can close down. Seriously like the post says, this doesn’t only apply the the celebrities, but your own IG and Kakaotalk pictures can be taken into screenshot and you can end up on Pann tooㅋㅋㅋㅋㅋ If you look at teens stories, you’ll see commoners from IG every day and they get hated on and the posts will never be taken down. They’re purposefully not removing any of those posts, let’s sign the petition

Pann and DC are similar. At least for other communities, they’re trying to at least monitor it a bit