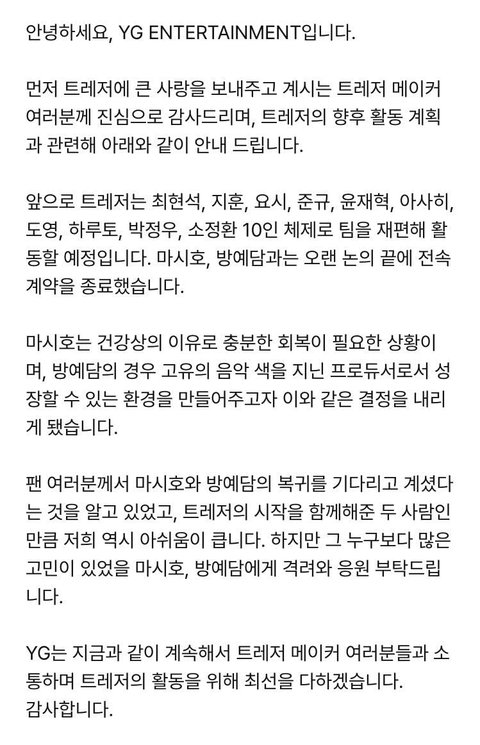 Hello, this is YG Entertainment.

First of all, we would like to express our sincere gratitude to all of the TREASURE MAKERS for all the support and love towards TREASURE.

Today, we have an important announcement about TREASURE’s future activities.

After a long and careful discussion with Mashiho and Bang Ye Dam, we mutually agreed to conclude the contracts between the two and YG Entertainment.

We have reached such agreement so that Mashiho can have enough time to recover from his health condition, and Bang Ye Dam can pursue his career as a producer.

Thank you so much.

Groups have no demand for members like Bang Yedam, a talented person shouldn’t be meant for groups and the fact that he was shoved in a group with so many people…. Everyone wished he debuted as a solo, so I don’t understand why YG did that to him. He’s been decaying there for 10 years. I don’t know what’s helpful for him or for Treasure that he was there

Why are people swearing at YG? It seems like they resolved this issue the right way. The members who wanted to quit probably voiced their wish and were given months to think through it, and they were able to just leave to another company without any conditions. It’s not like they were now allowed to promote with their group or that they were forced to keep promoting, you can tell that they didn’t fight on either sides. They didn’t sue their company bck and there wasn’t anything shady in the contract, and this wasn’t a forced withdrawal either. Just respect their decisions

They should’ve done it faster, what was the point of halting promotions? Everyone has been f*cking begging for Bang Yedam to go solo aalready… And Mashiho was kind of the mood maker of the team, so I’m curious to see what the members think of this

It’s true that YG is at fault for choosing this timing but they were the ones who took the decision in the end. YG gave them all the time they needed to think through this (as someone who’s been a fan of YG artists for a long time, they’re the type to wait after their artists)

What pisses me off the most is the Teumae who are telling them that they’re doing well leaving the group, why are you bullsh*tting like that?