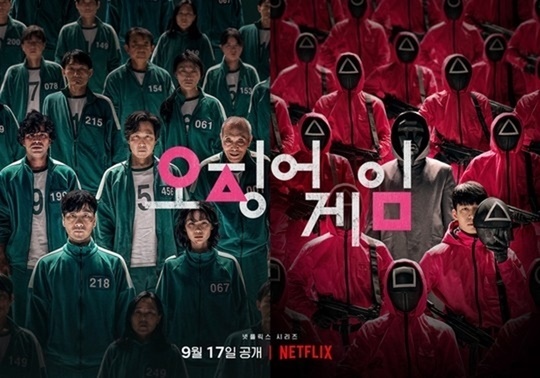 This is a frenzy beyond the syndrome.

While the world is immersed in the charm of ‘squid game’, the criticism of the drama seems to be reevaluated as an overwhelming score.

Netflix original ‘squid game’, which was released on September 17, was criticized rather than popular in Korea shortly after its release.
It was pointed out that the neo-fascist elements that do not fall in the game and the way of drawing the weak such as women, foreigners, and the elderly are pointed out.
In addition, the public opinion in and out of the country was not good because the actual user of the phone number in the business card, which was received when Sung Ki-hoon (Lee Jung-jae) was offered to participate in the squid game, complained of damage.

But the situation changed with a hot response from abroad: ‘Squid game’ was the number one spot in 83 countries where Netflix is served.
As of October 6, among the 83 countries ranked in the Flix Patrol, 75 countries, including Korea and Denmark, are maintaining the top 10 TV programs in 75 countries.
Actors are also hot: cast members have a surge in SNS followers, while some cast members appear on the popular American talk show NBC’s “Jimmy Fallon Show.”
In overseas e-commerce such as Amazon and eBay, a set of squid game screens are being sold as a product description, and a hot wind is blowing overseas.
In addition, the tick-tock video with the ‘#squidgame’ hashtag has exceeded a total of 25.6 billion views.

With the hot popularity of the drama, many foreign media have illuminated the box office elements of ‘squid game’.
Unlike the brutal content, the set of kitsch colors, which are easy to sympathize with around the world, is mentioned as a box office element.
Among them, it is interesting to mention that the part that was considered as a critical element in Korea is the secret of the box office.
The game, which was pointed out as simple and unfortunate, was re-evaluated that many people in the world could access it more easily because it is a rule that anyone easily understands.
Director Hwang Dong-hyuk also cited the simplicity of play as one of the secrets of popularity.

In addition, the 6th episode, which was regrettable because of the so-called ‘K-Shinpa’ in Korea, is the episode that is getting the hottest response from overseas.
According to IMDB, the world’s largest site that collects video content information such as movies, six quick games scored the highest score of 9.4 compared to other times.
“It’s one of the weirdest and most fascinating Netflix works,” Forbes said of the “squid game.”
The sixth episode is the best TV program episode this year. ”

It is not a meaningful act to intrude in front of a critic of a quick game, or to criticize the criticism of the work in front of a quick game syndrome.
Rather, if you look at the domestic public who are struggling so hard, you will see the driving force of K-content that enthuses the world.
Singer Cyay, who has enjoyed worldwide popularity with ‘Gangnam Style’, appeared on SBS ‘Archive K’ and said, “Dignity and precision are like K-POP popularity factors.
If you want to get applause in Korea, you have to do really well. If you hit K-POP as an entrance exam, you will get a full score.
It is like the reason why all the efforts to stand out in a fierce competition are applauded outside the house. ”
Cyay has talked about K-POP, but it is in line with changing it into a movie or drama.

The praise and overwhelming figures of foreign media do not mean that the unfortunate aspect of ‘squid game’ disappears.
However, it should also be avoided that some of the inconveniences and regrets of the screen lead to the devaluation of the work itself.
As always, quality criticism will raise the quality level of content to a new level, and the results that are proven by numbers will be the basis for quantitative capital to support quality content.