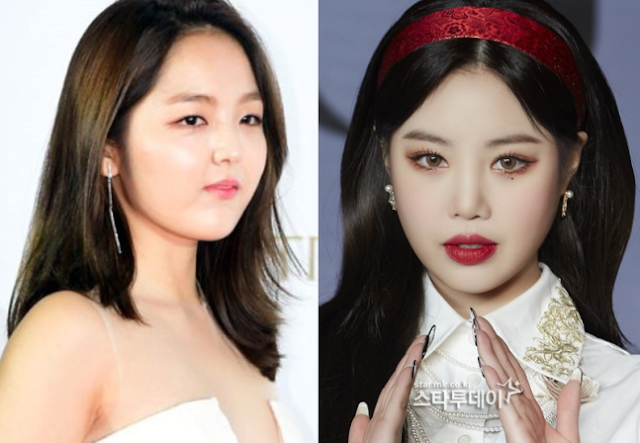 Article: Seo Shin Ae “Soojin was a bully… she wore at me and made personal attacks for 2 years”

2. [+3,564, -24] Thank you for feeling brave enough to say this, I’m sure you’ve gone through a lot of emotional suffering ㅠㅠ school bullies must be punished!!!!

3. [+1,645, -7] She tried to claim that she never once had a conversation with Seo Shin Ae but it looks like she inflicted mental attacks on her.. The people I hate the most in the world are the ones who are so shameless about the wrongs they commit.

5. [+793, -15] This, well… can’t be covered up ㅠㅠ Some of her fans are saying that it has nothing to do with her because she didn’t directly inflict the violence but you’re just as bad for being part of such a group and snickering with them.

8. [+306, -1] Cube’s legal team needs to issue an apology to Seo Shin Ae. This is complete proof that they don’t know what they’re doing. It’s pathetic that Cube hired you guys at all.

Article: Soojin demanded a statement from Seo Shin Ae only to be met with a counter attack

1. [+4,590, -21] I want to ask one thing to Soojin’s agency Cube Entertainment: you said you sued all of the posts by the victims, right? Then will you be suing Seo Shin Ae’s post today as well? Or will you be taking other actions? Because if you don’t sue Seo Shin Ae as well, you will be showing that you are harder on the weak and lighter with the strong. I wonder what their official statement will be.

3. [+1,957, -29] It’s fine to make mistakes and commit wrongs when you’re young but if you fail to recognize and admit to that as an adult now, that makes your mistakes a complete wrong worthy of criticism and exile from the industry.

1. [+3,623, -10] Wow… to think she was shameless enough to demand a statement from Seo Shin Ae… did she think she was still too scared to say anything? Or maybe she was hoping that she’d say “nothing happened between them” since her career’s over anyway?

3. [+1,490, -9] I don’t think Soojin expected her to come out with the details… Well, I hope Soojin realizes that her face has no business being a celebrity, just like what she said to Seo Shin Ae.

5. [+406, -2] Soojin made herself the assailant when she demanded Seo Shin Ae to put out a statement. It wasn’t even a request, it was a demand. Soojin and her agency and her fandom are all the same. Cube is playing this so dirty.