SEVENTEEN and BLOO have swept the latest Gaon weekly charts!

On July 2, Gaon Chart announced that both SEVENTEEN and BLOO had officially earned double crowns for the week of June 21 to June 27 after topping two separate charts each.

In addition to topping this week’s physical album chart with their latest mini album “Heng:garæ,” SEVENTEEN also claimed No. 1 on the digital download chart with their new title track “Left & Right.”

Meanwhile, BLOO’s “Downtown Baby,” which recently shot back up the charts after Lee Hyori performed the song on MBC’s “How Do You Play?“, took No. 1 on both the overall digital chart and the streaming chart for this week.

Finally, BLACKPINK continued their winning streak at No. 1 on Gaon’s Social Chart 2.0 for the fifth week in a row.

Congratulations to all of the artists!

Check out the top five for each of this week’s charts below:

SEVENTEEN claimed two of the top five spots on this week’s physical album chart: not only did their new mini album “Heng:garæ” debut at No. 1, but the Kit version of the mini album also charted separately at No. 5.

EXO’s Baekhyun similarly claimed both No. 3 and No. 4 on this week’s chart with his latest solo mini album “Delight.” After previously debuting at No. 1 on the weekly album chart, “Delight” shot back up to No. 3 this week, while the Kit version of the mini album entered the chart at No. 4.

Finally, IZ*ONE’s “Oneiric Diary” stayed strong at No. 2 for the second consecutive week. 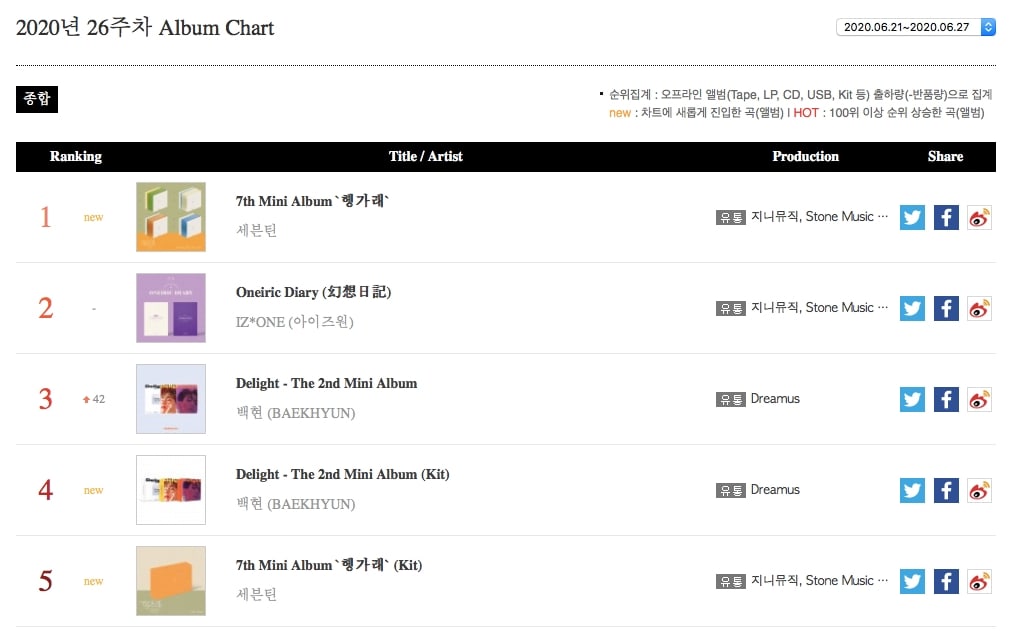 SEVENTEEN’s new title track “Left & Right” debuted at No. 1 on this week’s digital download chart, followed by Kim Ho Joong’s “Grandmother” at No. 2. BLACKPINK’s new title track “How You Like That” entered the chart at No. 3, with BLOO’s “Downtown Baby” at No. 4 and IU’s “Into the I-LAND” (the theme song for Mnet’s new reality show “I-LAND”) at No. 5. 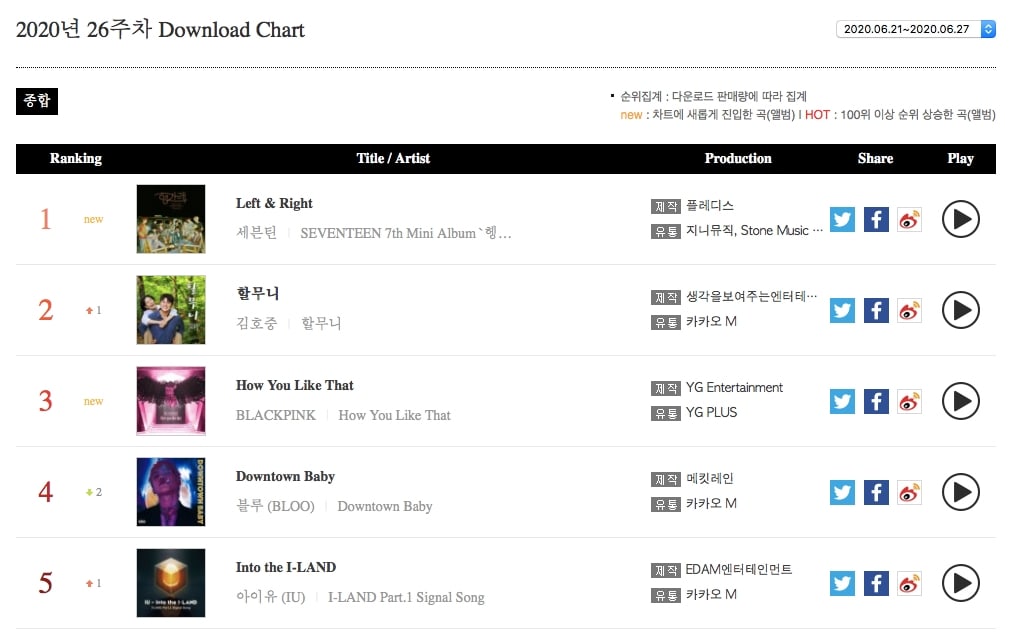 BLOO’s “Downtown Baby” held onto its spot at No. 1 on the overall digital chart this week, while IU’s “eight” (featuring and produced by BTS’ Suga) similarly maintained its position at No. 2. IU’s “Into the I-LAND” rose to No. 3 this week, trailed by Jo Jung Suk’s “Aloha” (from the OST of tvN’s “Hospital Playlist”) at No. 4 and Jeon Mi Do’s “I Knew I Love” (also from the OST of “Hospital Playlist”) at No. 5. 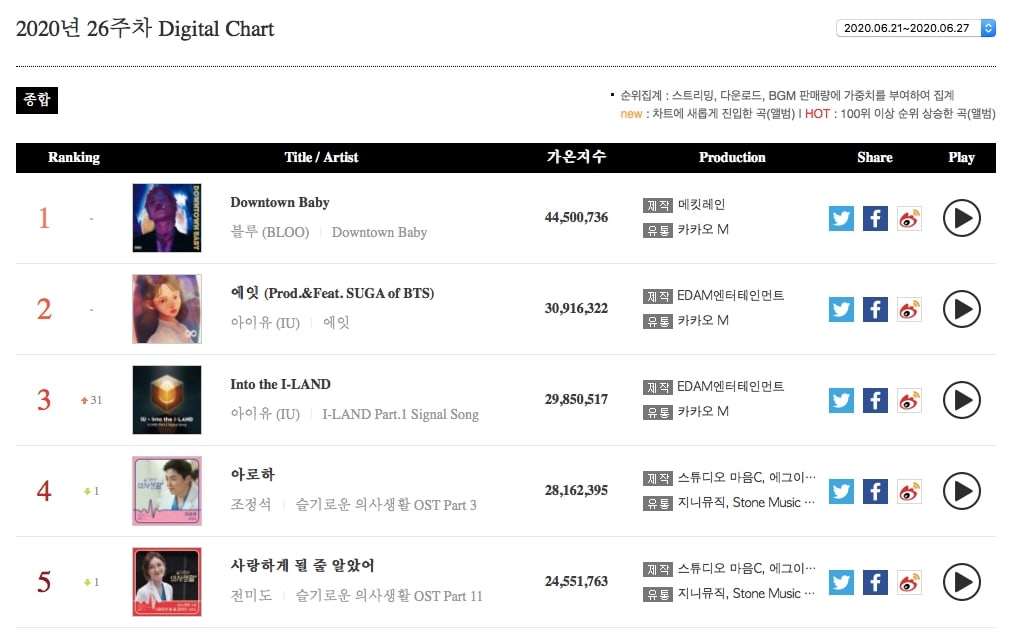 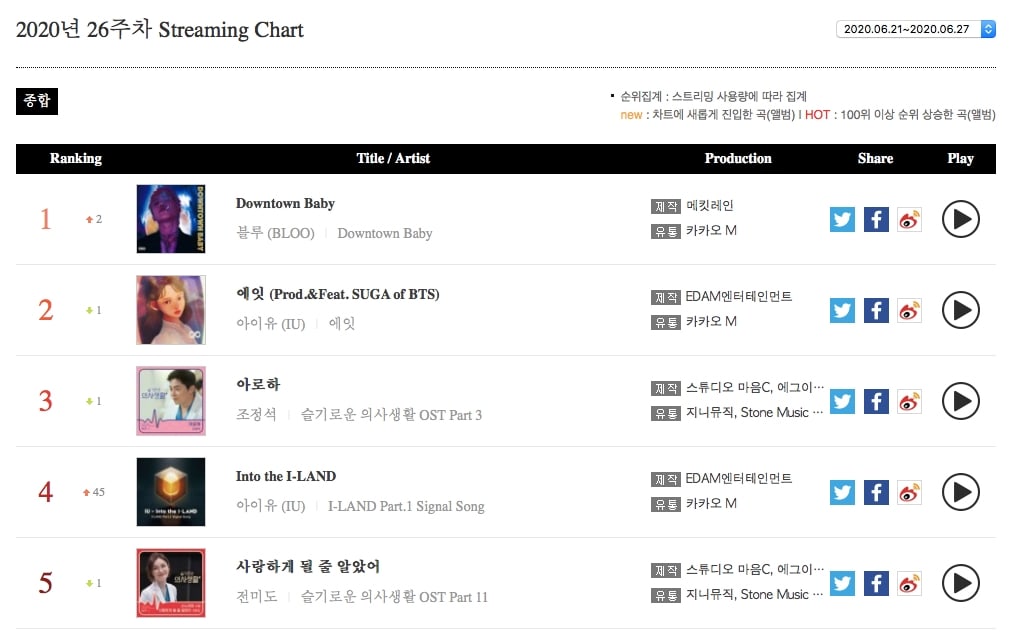 BLACKPINK remained No. 1 on Gaon’s Social Chart 2.0 for the fifth consecutive week, while BTS and IZ*ONE also held onto their spots at No. 2 and No. 3 respectively. Kim Ho Joong came in at No. 4, with Stray Kids rising to No. 5 on this week’s chart. 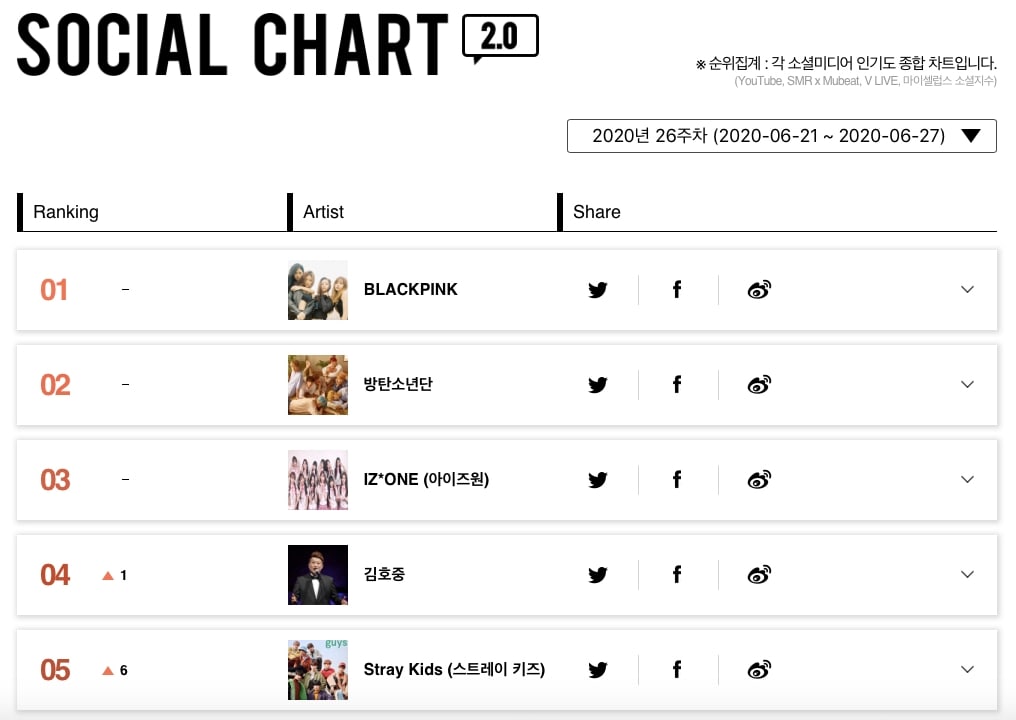 Watch Lee Hyori on the latest episode of “How Do You Play?” below: