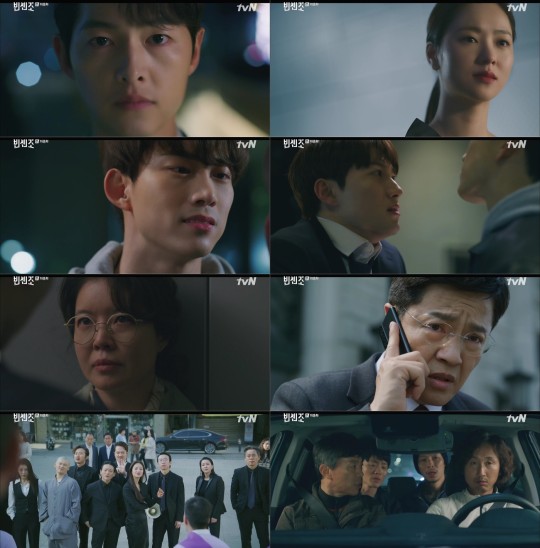 Article: ‘Vincenzo’ ending divided into love or hate due to violence, Song Joong Ki claims it could’ve gone harder “I didn’t think it was too cruel”

2. [+82] The scriptwriter’s previous works follow a similar vibe, but while his previous works felt like a satire on our society, ‘Vincenzo’ felt like his explosion of anger. I liked Vincenzo as a character at first because there was no way that he could represent good but I still felt sad that the fact that he’s a murderer would never change, even though it felt good to see him cruelly murder off all the evil characters in the drama.

3. [+74] I thought the ending was befitting of ‘cleaning evil with evil’… a true representation of a mafia’s revenge..

6. [+16] We knew he was a mafia from the start, someone who kills other people. It wouldn’t have made sense to throw him in some jail in Korea for a happy go lucky ending. It felt good to see him kill everyone off… I think the debate over the ending is in all of the violence being shown for an episode rated 15+ and not 19+ but I personally found it refreshing.

8. [+9] My vote goes to the ending being too violent ㅠㅠㅠ especially as someone who can’t stomach this type of violence..😢😢😢

9. [+3] Please stop casting our Kwak Dong Yeon for these roles anymore ㅠㅠ why is he always playing sad, pitiful characters who end up dyinggg

10. [+2] Honestly, the last episode was so cruel and bloody, I felt nauseous watching it

11. [+3] I prefer this to other dramas that kill off the evil characters in boring ways. Yes, the episode was bloody, but I think people would’ve been equally bored if all it took was one gunshot.