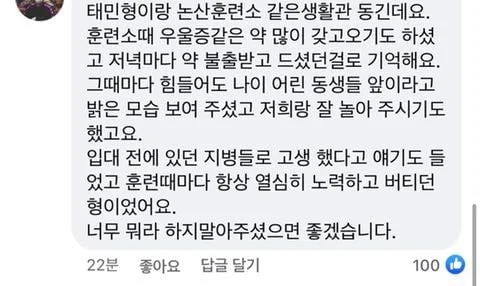 “I’m a colleague of Taemin-hyung who was with him at the Nonsan training camp. When we were at the training camp, he brought a lot of what seemed to be antidepressants. I remember him taking the medications every evening. Every time that happened, even if he was having a hard time, he would show his younger dongsaengs a bright image and would play well with us.

I heard talks about how he was having it hard because of the chronic diseases he had prior to enlisting. But he was a hyung who always tried his best and endured through everything in every drill.
I hope that nobody judges on him” 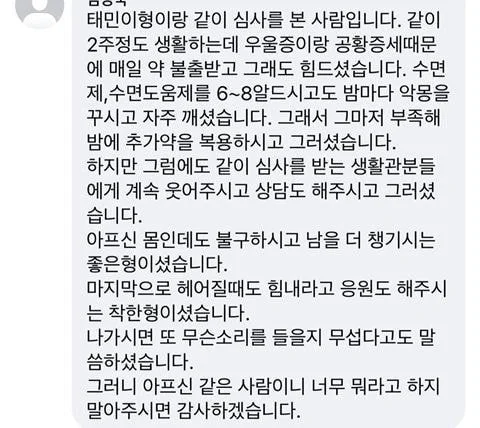 “I’m a person who was evaluated(?) with Taemin-hyung. We spent around 2 weeks together. Because of his depression and panic disorder, he took medicines everyday. But even so, it was still difficult. Even though he took 6~8 sleeping pills/pills to help with sleep every night, he would still wake up often due to nightmares. So he took additional medicine at night because even that much wasn’t enough.
But even so, he was always smiling and giving advices to people who spent their evaluation time with him.
Despite his sick body, he was the good hyung who took care of others even better than himself.
He was the kind hyung who gave us strength and supported us when we had to separate at the end.
He said that he was scared of what people would say once he gets out.
So I will be very thankful if you don’t judge a sick person”
I hope he overcomes this ㅠㅠㅠ
original post: here
1. This breaks my heart ㅠㅠ I hope that he doesn’t blame himself and that he stays always healthy ㅠㅠ
2. I’m a fan and this seriously made me tear up
3. “He said that he was scared of what people would say once he gets out”<< is being scared of getting hate because you’re sick real life?… Seriously, I don’t want to live in this world anymore
4. Even the fans didn’t know that he had depression… I bet that their shock was even bigger… what is happening
5. Aido.. I’m not a fan but this upsets me.. I bet that the fans are sad too
6. I kept thinking about this so I’m commenting here again… I don’t know what his image is on broadcast since I’m not a fan but seeing how he’s unable to sleep, how he barely gets any sleep even with a handful of medication, how he has nightmares is just ㅠㅠㅠㅠㅠㅠ I get that becoming a celebrity comes with its risks but I feel like he went through too many hardships at such an young age…
7. Depression and panic disorder….. wow ㅠㅠㅠ
8. Ah I feel like we won’t be able to protect his private information anymore, so sad ㅠ
9. He’s been in the military for over 200 days and normally, he would’ve been promoted to corporal level next month.. ㅠㅠ just how hard has he been enduring thisㅠㅠㅠㅠㅠㅠㅠ don’t be sick Taemin-ah ㅠㅠㅠㅠ
10. Ah Taemin-ah, I wonder when all of this hardship began..
11. Even for a celebrity as clean as Taemin, he probably heard all kinds of words from that world. Being a celebrity is such an extreme job
12. If he was having it so hard that he’s not able to sleep even with 6-8 sleeping pills ㅜㅜㅜㅜ I really hope he gets better ㅠㅠㅠ