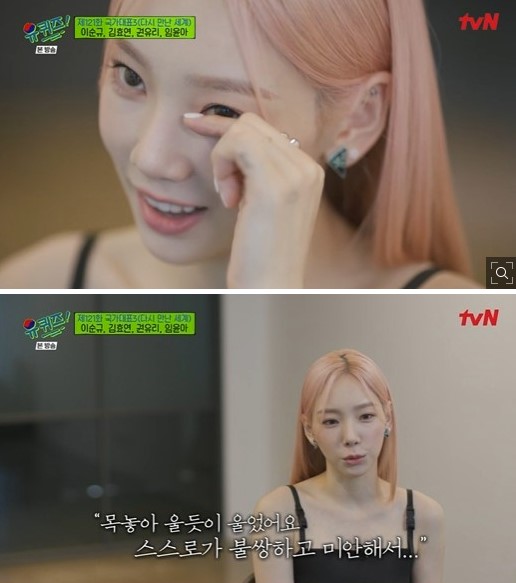 Article: Taeyeon responds to question “How has your 14 years as SNSD been?”

“I discovered that I was being hurt, sacrificing myself, or spending all my time on either a person or a project. I realized that I was working, trying so hard, and struggling. When I realized that, I sobbed out loud, like I was crying. I felt so bad and sorry for myself. I cried because it was my first time experiencing such an emotion. I thought that I needed to express and communicate with myself more. Through that, I came to know my emotions better and be more honest with myself.”

1. [+253] To have debuted at such a young age, it must’ve been so hard to have made it to her thirties under so much scrutiny and judgment from others. I hope her future is filled with nothing but happy things 👏

2. [+171] Sigh, even on posts like this, people are still saying “who cares as long as she made a lot of money”… Why should people have to worry about what others think when expressing their own struggles? ㅋㅋㅋㅋ So is she only allowed to answer these questions by saying “Nothing but happy things happened to me”? Where is all of your empathy? 😢

4. [+65] I knew there’d be comments twisting her words… Becoming a celebrity isn’t for everyone. She maintained her position at the top for 14 years and that’s amazing. Obviously, she’s going to experience struggles that we won’t ever feel. Nothing is free in this world. Why are you judging someone else’s pain through your own standards? She has popularity and wealth… and while luck plays a part in achieving those things, so does a whole lot of effort and suffering. If you can’t empathize with her, at least don’t comment things that discredit her worth.

6. [+35] I guess you’re not allowed to feel struggle if you’re rich ㅋㅋㅋㅋㅋㅋㅋ I feel sorry for the people who can’t even find it within themselves to just comment “it must’ve been hard for you” and instead have to twist her words

7. [+37] SNSD Taeyeon is seriously in the top 5 when it comes to celebrities who got a lot of hate without doing anything ㅎㅎㅎㅎ SNSD is a legendary girl group who were flying to Paris and Australia in the same day at the peak of their fame while still attending music show schedules. I’m sure it was physically exhausting for them. Furthermore, since she’s an idol in a group, she couldn’t pursue music or dances of her choice. And yet she still worked so hard and did so well only for people to still endlessly hate on her. Of course she must’ve been hurt and felt difficulties. People fight on the internet all the time and get hurt over hate, threatening lawsuits and mental health treatments all the time. Imagine that but hundreds of people leaving comments like that on you all the time. She shouldn’t have to bear with it just for being a celebrity.

8. [+9] I think everyone experiences this moment in life where reality hits hard but just because she happens to be a celebrity, people choose to hate on her for it 😢

9. [+9] Just because you’re rich doesn’t mean you’re always happy.. why do you think celebrities commit suicide, or the rich… Everyone is facing a struggle at their own standard..