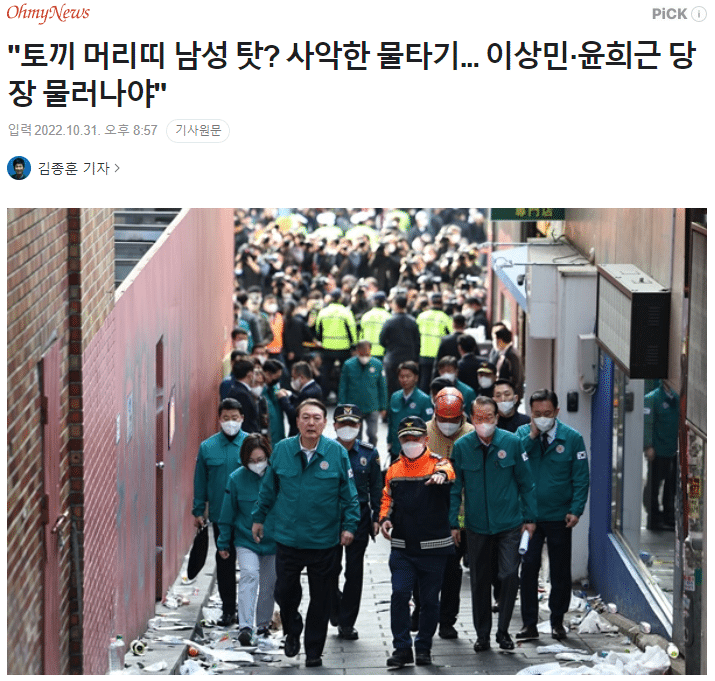 Minister of the Interior and Safety

Recently, the police have started looking into allegations of who incited/started the pushing. It was identified by a few reports that a man wearing bunny ears instigated the pushing by screaming “push!” during the event along with 5-6 friends including foreigners. The police has started a search to identify these men. Read more here)

1. Let’s first catch the people in the government

2. But both the government and the man in bunny ears were at fault

3. Then what are these f*ckers? There’s been common testimonies about the man in bunny ears and his friends so why are people shielding them so much? What “shifting the blame”?

4. Can we just catch them all?

5. The article isn’t saying that the people are not at fault. It’s saying that the government is more at fault for avoiding responsibility since this could’ve been prevented

6. At this point, just catch them all

7. It’s true that they are shifting the blame. It’s the government’s fault for letting this happen

9. Why do you think people are shielding the man in bunny ears? Because they think that it means that the people on site were wrong and that they are the ones to blame. However, the government was the one who didn’t put the proper safety measure in pleace… I’m scared that at this rate, nobody will take responsibility for this

10. No but just go read the article, it never said that the man with bunny ears wasn’t at fault. The main point of the article was “Of course, if someone deliberately asked others to push, it’s definitely wrong. However, even if such a situation has occurred, it is the role of the government and local governments to prevent citizens from collapsing or crowding at the site. Governments and local governments should be held accountable for not performing these roles properly.” and I agree with him

12. To be honest, I do think that the government is more at fault