1. Dua Lipa is cool, she seems to have principles

4. People are always in uproar about human rights when the World Cup is not done in South America or Europeㅋㅋㅋ

5. Personally, I think there is a reason Dua Lipa is getting hate- First of all, an article from the UK stating that thousands of people died while building the stadium was an overblown article to discriminate against Islam (I’m not saying this to support Islam). The company that built the stadium was French. Because it’s a company, if there was a human rights violation there, it’s the company’s fault. It’s because I think that shouting a boycott of the Qatar World Cup for a reason unrelated to Qatar is discrimination against Islam. So it’s unclear if this human rights issue is Qatar’s issue so for Dua Lipa to bring up human rights, women rights, gay rights or whatnot just seems like discrimnation against Islam. It’s even more messed up because she performed in other countries with similar issues

6. Why are people hating on Dua Lipa here?…

7. The reason why Dua Lipa is getting hate 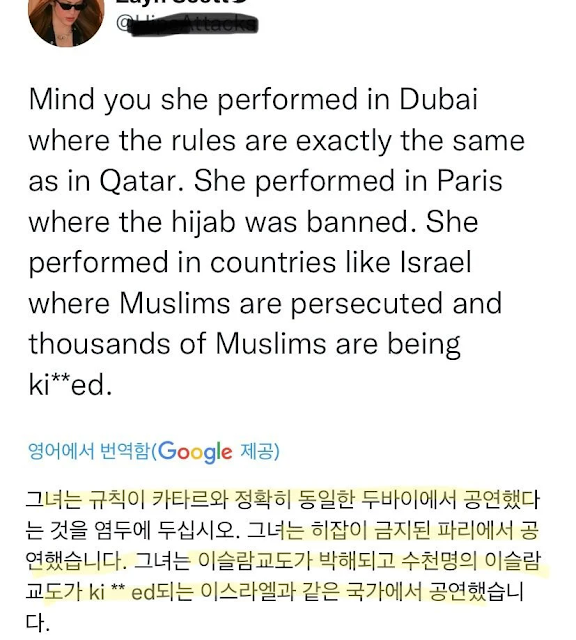 8. I don’t think that Dua Lipa deserves the hate here, nor the artists performing there. The only one that deserves hate is Qatar

9. Seriously, you guys are ridiculous for hating on Dua Lipa for bringing up human rights

10. It’s a migrant worker problem in every country, but dozens of workers died while building the Qatar World Cup stadium, so why do you grab our country’s hair to shield Qatar? And to open the World Cup in the desert, they have to do outdoor air conditioning even in the winter. Everything about this is just so absurd. There’s a reason why people are boycotting the World Cup abroad. Of course there are people who will accuse her of being an attention seeker and there are also trolls here who are using this World Cup just to hate on the singer from our country who’s participating in this but the kids who are shielding Qatar and hating on Dua Lipa are also trolls. Everyone, just hate on Qatar only