I’m not worried about KPOP, it’s more like a complaint…. Before COVID, I was a high schooler and I hated studying so I tried to break away from work and attended some flop-dols’ fansign for fun… They were freaking flop-dols and I didn’t even know any member’s names, I just went like that, maybe I was crazy, but anyways… But in a way, it was quite fun. I was young so the oppas were all viewing me prettily and when I talked about my worries, they all way “aigo is that soㅠㅠ” Rather they idols, thye seemed more like a Wee Class (t/n: integrated app that aid students in their studies/student life). F*ck that’s why I ended up going to that group’s fansigns so often. They felt like the oppas who were closest to me before COVID hit. They would tell me “OP-yah, you’ll like me whatever I do right? I’ll like you even if you can’t go to the university” and sh*t like that.. I was like “Huh? What did they just tell me? I don’t even like oppa that much and if I can’t go to the university, I’ll end up dying f*ck” so I got f*cking mad and stopped attending their fansigns after that. After, COVID hit and they were from a small company so they were obviously f*cked over… I quit the fandom of those oppas but actually, they disbanded… Sorry I’m talking so f*cking much, anyways, that’s what happened!!! 3 years passed and I dug up my IG, and there was that this unnie that I met during the fansigns who was followed by the oppa from that group. She let me know and I followed him and he sent me a DM. He was asking me if I was going to the university and I thought “F*ck is he trying to be friends with me? It should be okay if he’s a commoner now right?” so I opened his DM and saw after his question, asking me whether I was going to the university, a f*cking huge paragraph. He was talking about how he remembers me for liking his group and that I came to his fansigns and that he just wanted to tell me that. At that time, I was having a hard time, so I didn’t say anything, but after that, I went back and apologized with a f*cking long post with how I stopped going to their fansigns. He said that he was thankful and that it was a relief because I went to the university. I was reading his message and I started bawling my eyes out.. Looks like I really liked that oppa… 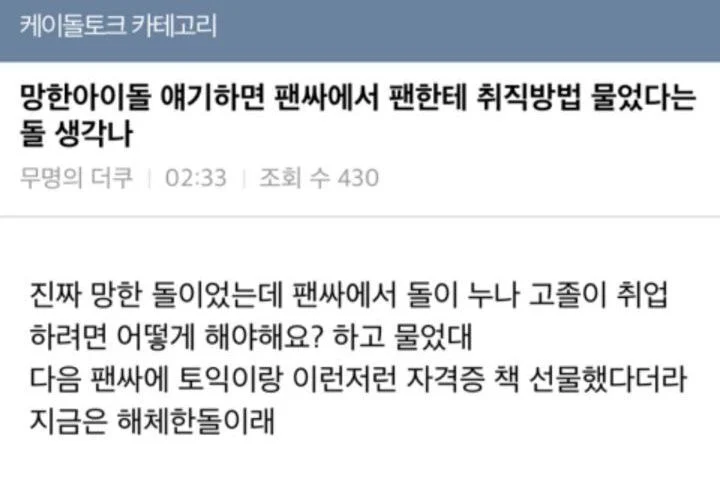 “While on the topic of flop-dols, it reminded me of that idol asking fans about ways to find jobs during a fansign”

They were seriously a big flop-dol, they asked me during a fansign what can they do with a high school diploma?

and the next fansign, they asked me about TOEIC, so I ended up getting him a book about how to obtain a certificate as a gift. But now they’ve disbanded”

1. One failure doesn’t mean your entire life has failed, everyone find strength…

2. My heart hurts, everyone, if you have a dream, I hope that your dream will be fuldilled. Everyone, please be happy

3. This is what they’ve always wanted to do so I bet they were holding so bad onto it, I feel bad… Seriously idols are all about lucking out with their agenciesㅜ

4. Seriously these idols must be having it so hard….ㅠ I’m reading these posts and my heart hurts

5. My previous bias were from a f*cking small company and it was so bad that they were straight up giving me spoilers of things they were doing without being subtle. The company’s CEO even knew my contacts and would call me to tell me to come to the airport and take their pictures when they were leaving the country ㅠㅠ

6. The first post was so sadㅠㅠ “Will you like me whatever I do? I’ll like you even if you don’t go to the university” -> He knows that this is his dream and that he can’t give up on it, but it feels like he’s trying to get you to tell him that even if he’s not an idol, that it’ll be okayㅠㅠ He probably got super self-conscious because you didn’t show up after…

7. It was funny at first and then it got so sad ㅠㅠㅠㅠㅠㅠ Everyone, I hope you’re living a good life

8. What the? ㅠㅠ It’s so sad. The fact that we call them flop-dol is not it

9. Idols must be working very hard towards their dreams too ㅠㅠㅠㅠㅠ This is sad ㅠㅠ

10. ㅠㅠ Everyone is trying to live their lives the best htey can, I hope that my bias also gets recognition before it’s too late…