Manager: We left for work. We’re taking XX’s car for the [hair]cut

CEO: [manger]-ah finish the cut, go run an errand for me

Manager: they went to work out

CEO: When are you going there?

CEO: You can find the store manager too

CEO: Get it done fast 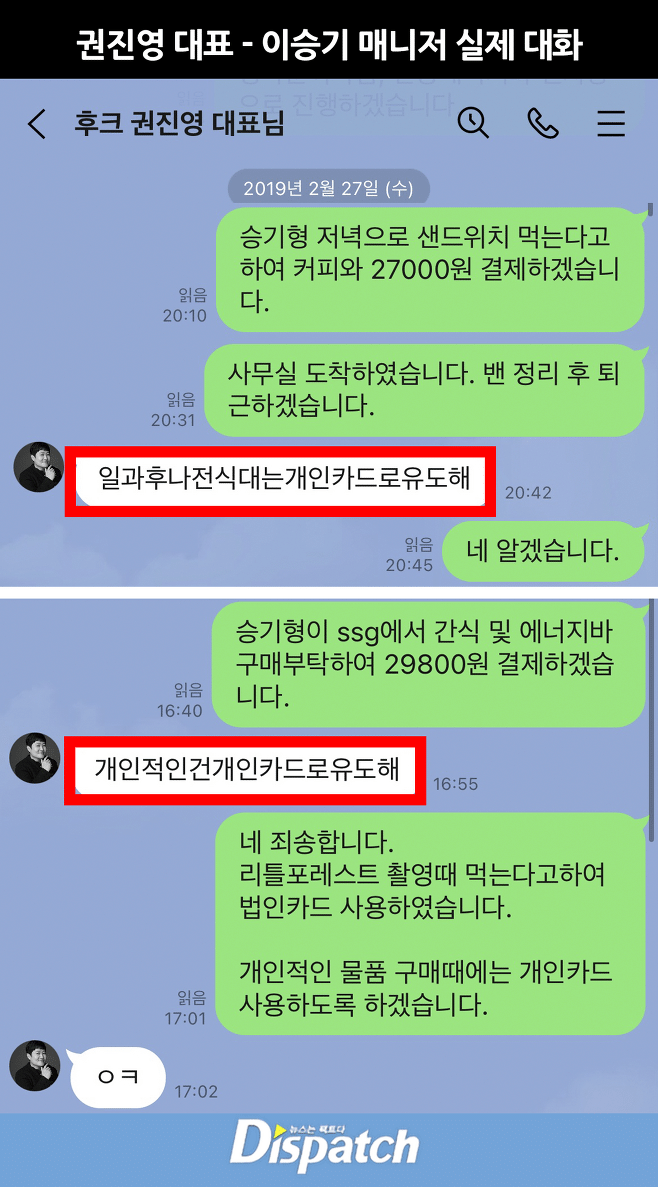 Manager: Seunggi hyung said he was eating a sandwich for dinner and with the coffee, it’s gonna be 27,000 won

Manager: We arrived at the office. After clearing up the van, we’ll leave work

CEO: Use your own card for the supper

Manager: Ok got it

Manager: Seunggi hyung went to get an energy bar at SSG it was 29,800 won

CEO: Use your personal card

Manager: Yes, sorry. We ate during the Little Forest shooting and used the company’s card. We will be using any personal purchases under our own personal cards. 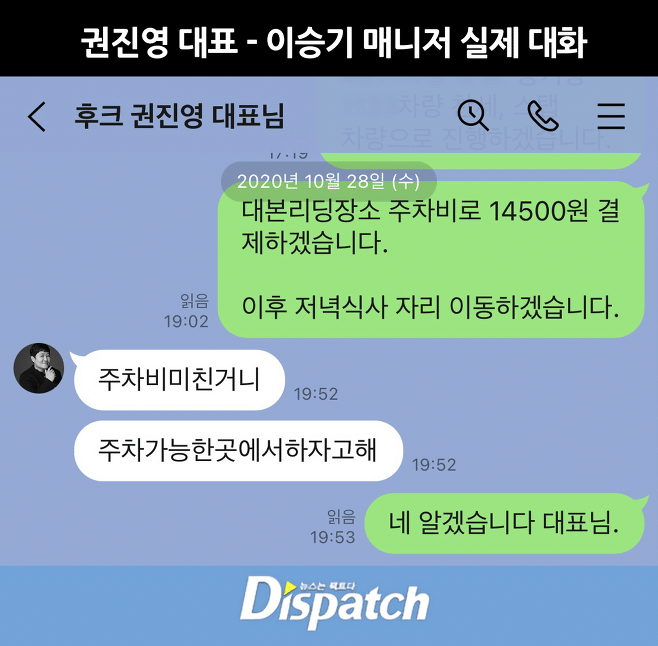 Manager: Parking fee for the script reading was 14,500won. We will be moving for dinner now

CEO: Parking fees are so expensive

CEO: Next time take places where you can park [for free]

Manager: ok got it CEO nim

After Lee Seunggi’s “18 years of slavery” article went out, reports poured in. Here is the conversation with an informant, which can clearly get a glimpse of CEO Kwon Jinyoung’s personality. The informant was an employee from LouXXX.

“When that person appeared, I ot a text that said “Be careful, don’t ask her any questions”When she was done shipping, I did the valetting for her Ferrari ands he suddenly screamed.”

Kwon said that she found the Ferrari exaust sounded weird.

“Hey this F*cker. You look down. This f*cker, why is this making noises when I passing by? Because of you I feel endangered. All the employees here, come out.”

According to the informant, he almost went to the point of kneeling. He said that his feeling of contempt at that time was undescribable

LouXXX employees said, “That person is the representative of Hook. Because her purchasing power is so great, nobody could say anything at that time.”

In the recording, CEO Kwon said, “He even sent a request for certification of revenue content. He’s like doing this to make me go all out. I will swear on my name I’m going to kill him. I’m going to use the rest of my life to kill Lee Seung Gi, that prick. You leave too.”

The director of the company tried to explain to CEO Kwon, but CEO Kwon angrily continued, “Shut it. Stop it. I’m going to kill him. I’m going to use the rest of my life to kill that prick.”

Lee Seung Gi’s manager, who left the conference room, vented out his anger to the company director and said, “I can’t do this anymore. I’m going to leave (the company). I won’t do this anymore. I really worked hard for 9 years. I was f*** looked down, and she would say Lee Seung Gi is finished in front of people. She would tell me to choose sides wisely. How can I continue? to work?”

1. Look at the video hul, the manager seems to be having a hard time ㅠㅠ

3. Lee Seunggi made how much money for them? Meanwhile she’s asking him to still use his personal card f*ckㅋㅋㅋㅋ She’s almost telling him to buy his own car at this point

4. Hul… The manager is having such a f*cking hard time

5. The manager is a saint at this point ㅠㅠ

6. Seunggi must leave with his manager too ㅠㅠ

7. Hul Lee Seunggi is considered a top star no? What is happening?

9. This is way too shocking