On November 11, SBS News exclusively revealed that the incident in LA, which took place on October 22, was not the first time that boy group OMEGA X had been threatened and abused by CEO Kang of Spire Entertainment.

Previously, it was reported that CEO Kang has decided to resign from Spire Entertainment after being filmed yelling at the members of OMEGA X in LA. In addition to threatening the members, Kang also grappled with member Jaehan after the group returned to the hotel, and proceeded to pound on the doors of the group members’ hotel rooms until police showed up.

According to insiders, Kang’s anger ensued due to the fact that the members of OMEGA X did not read some comments they were supposed to read out loud at the end of their LA concert, thanking the Spire Entertainment staff. After the incident, the members of OMEGA X returned to Korea by purchasing return flights using their personal funds.

Now, it’s been revealed that the OMEGA X members experienced frequent threats from CEO Kang in the past. According to some of the members, who spoke with SBS News, “Kang frequently called us late at night and would lecture us for 1~2 hours. She also messaged us incessantly on KakaoTalk and would threaten us if we did not respond. Some of the members who are suffering from anxiety disorder had a very hard time because of the threats.” 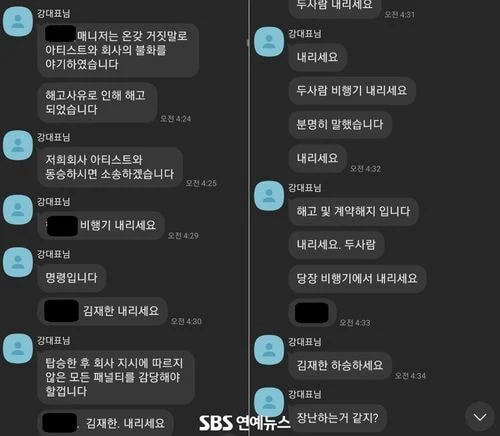 In a set of KakaoTalk messages CEO Kang threatens a manager of OMEGA X, as well as member Jaehan and another member:

“Manager X exacerbated misunderstandings between the artists and the company with all kinds of lies.

Finding this a cause for dismissal, you are officially fired.

If you accompany our company’s artists, I will sue you.

Get off the plane. This is an order.

Kim Jae Han, get off the plane.

You must face all penalties associated with violating orders from the company.

Both of you, get off the plane.

Kim Jae Han, member Y, get off the plane.

You are not only fired, your contracts will be terminated.

Do you think I’m joking?”

Furthermore, SBS News has discovered evidence that Kang forced members of OMEGA X to perform during their overseas tour even after the members tested positive for COVID-19 using self-test kits.

Two months ago in late September, four members of OMEGA X tested positive for COVID-19 before a scheduled concert. However, CEO Kang simply told the members, “Steel yourselves mentally and go on stage.” 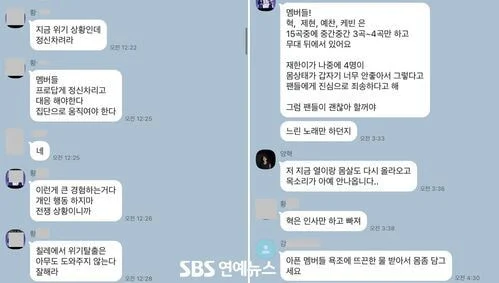 Two of the four members were ultimately too sick with fever to perform, but two others were strongly encouraged to perform as many songs as possible:

“We are in an emergency situation. Get yourselves together.

Members, get your head straight and act like professionals.

You need to have a group mentality.

That is how you gain real experience.

Do not act on your own. This is war.

We are in Chile. No one is going to help us. Do it yourself.

Hyuk, Jaehyun, Yechan, and Kevin. You guys just do 3 or 4 songs and go rest backstage.

Jaehan, tell the fans that these four are not feeling well, and apologize to them.

Or the four of you, just perform slow songs.

(Yanghyuk: I have a high fever and body aches, and my voice isn’t working at all.)

Okay Hyuk, just do the group greeting and then sit the rest of it out.

If you’re feeling sick, go take a hot bath [before the show].”

Meanwhile, SBS News has also reported that Spire Entertainment has recently forwarded a statement of accounts to 10 out of 11 OMEGA X members, claiming that each member owed up to 400 million KRW (~ $300,000 USD) in unpaid fees.

1. Wow what are they doing over there? Crazy

2. Crazy… what a bunch of bad adultsㅠㅠㅠ I hope the members can get out fast

3. These are seriously crazy f*clers… it’s a relief that the members are receiving treatment… seriously, this is dumbfounding…

4. Sigh ㅠㅠㅠㅠㅠㅠ so sad… these are young kids ㅠㅠ

6. Please get the members a good lawyer…

7. It’s shocking that they are still in that company right now

9. Just the way they talk is… these people are crazy…

10. It’s even more shocking that something like this is still happening in 2022.. Crazy