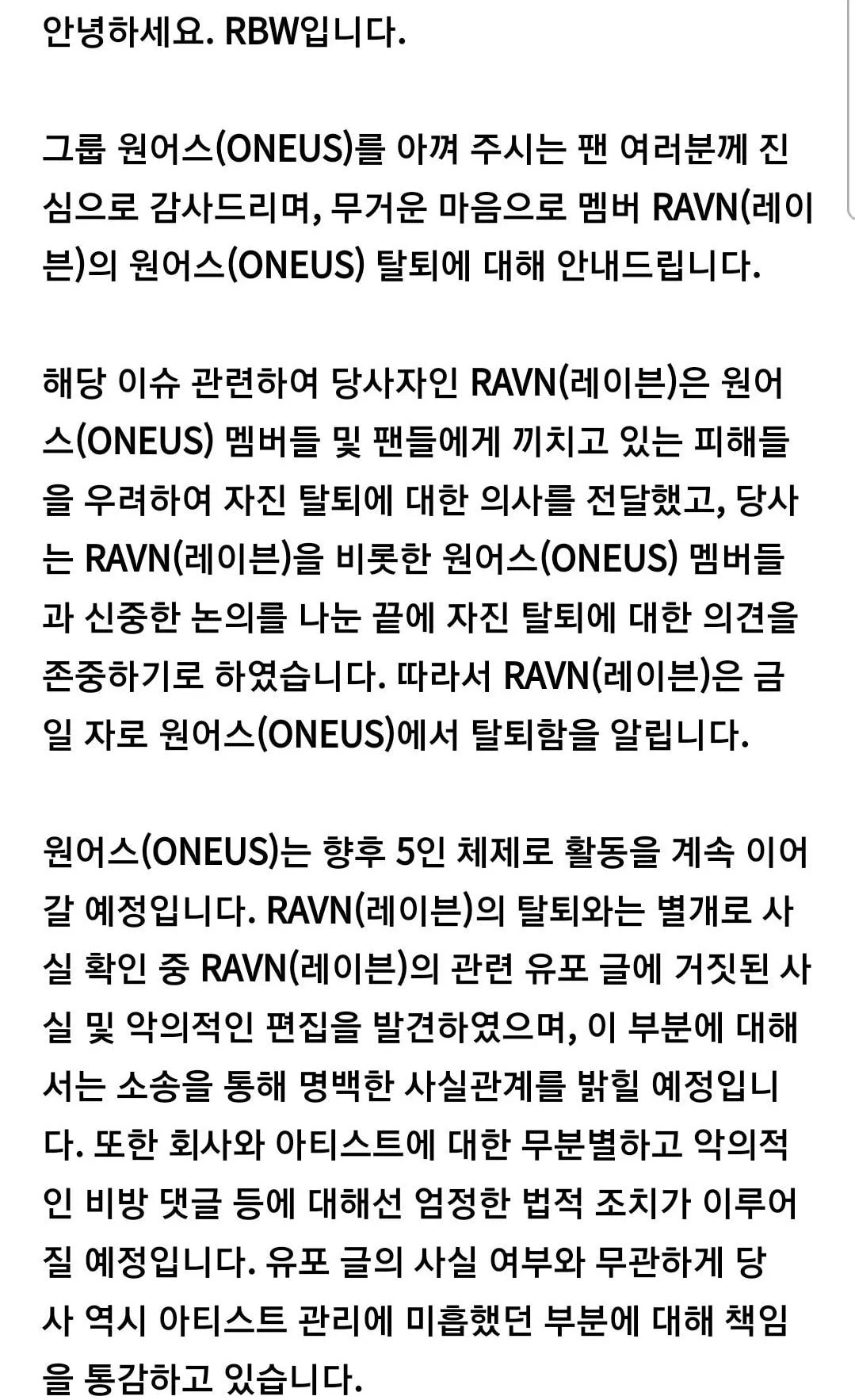 Previously on October 14, an anonymous individual claiming to be Ravn’s ex-girlfriend posted claims against him on Twitter. In response at the time, ONEUS’s agency RBW announced that they were checking the validity of the accusations and that Ravn would halt activities until further notice.

On October 27, RBW posted a new statement confirming Ravn’s departure from the group.

Read the statement below:Hello. This is RBW.

We express sincere gratitude to the fans who cherish the group ONEUS, and we inform you of Ravn’s departure from ONEUS with heavy hearts.

ONEUS will continue activities with five members from now on. Regardless of Ravn’s departure, while checking the facts of the case, we discovered false information and malicious editing included in the posts circulating regarding Ravn, and we will unveil the accurate truths on this through a lawsuit. In addition, there will be firm legal action taken regarding comments with malicious personal attacks against the agency and artists. Regardless of the validity of the circulated posts, we feel responsibility for our inadequacy in artist management.

We deeply apologize for causing concern to many due to an issue with our agency artist’s personal matters.

Please continue to show much interest and support for ONEUS’s activities, and we once again bow our heads in apology for causing concern to fans.

1. Hul their visual left ㅠㅠㅠ what are they going to do?

> Who caresㅋㅋ There’s people who can make up for him perfectly, don’t spoil this

3. If you check Twitter, lots of people are claiming that his videos were evily editied and that he should file a lawsuit or whatnot, all the I-roaches are shielding him

4. Congrats to the fans!

5. There are so many male idols who get into controversies that I can’t remember what he did ㅋㅋㅋㅋㅋㅋㅋㅋㅋㅋㅋ

6. Way better than when they don’t kick out the problematic members

7. Wow it’s so refreshing to see them kick out someone this fast, I’m jealous

8. Wow that was quite fast

10. I hope the other members succeedㅎㅎ ONEUS fighting